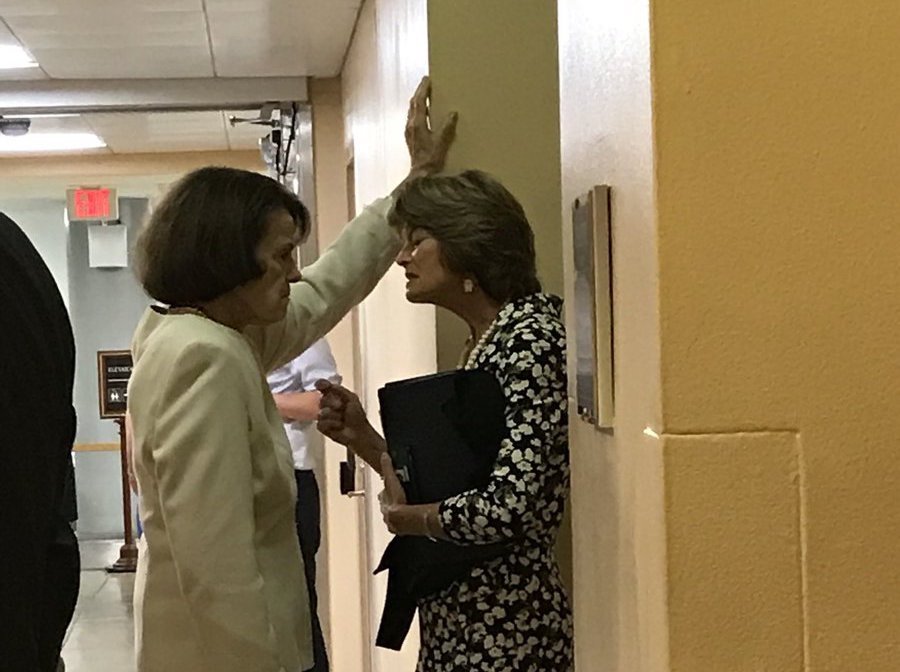 Motto: when you realize your character assassination failed and you’re not only going to have a conservative leaning SCOTUS for the next 50 years, but you also just screwed over your party for the next 2+ elections

The circus is over. The seventh FBI investigation on Judge  Kavanaugh is now finished. And, obviously, nothing was found. The so-called sex-assault-survivors’  (an expression that monetizes on holocaust iconography) claims remain uncorroborated by witnesses. The FBI report puts Kavanaugh in the clear, and it’s currently being reviewed by Senate. The report was delivered yesterday, on Wednesday, and, again, no witnesses to corroborate Ford&friends allegations of sexual misconduct against Judge Kavanaugh were anywhere to be found.

This is great news for Trump and his fan-base. However, we must get ready for bloodshed on Saturday if he is confirmed. Here’s Grassley: With FBI Work Complete, It’s Time to Vote.

However, the GOP is not out of the woods yet. It is within the realm of possibility that Collins and Murkowski take Flake’s side and vote against Kavanaugh confirmation. I’ve seen worse in this life. Keep in mind that RINO Flake is retiring, and has zero reasons to vote for Trump’s nominee for SCOTUS. He’s a globalist, looking for a well paid job at some law firm, or globalist corporation after he leaves the public office. That’s why he pulled this stupid circus in the first place, thus giving the left-wing mainstream media seven more days to perform a “thorough” character assassination on Kavanaugh. The good part about this sad display of corruption is that Republicans are now more united than ever, while the Trump base is royally pissed off. And that’s right before the midterms. The dimms are not very bright indeed.

Wow, such enthusiasm and energy for Judge Brett Kavanaugh. Look at the Energy, look at the Polls. Something very big is happening. He is a fine man and great intellect. The country is with him all the way!

Even if the vote for nominating Judge Kavanaugh fails in the Senate, if President Trump goes full God Emperor and promises to re-nominate the judge after the midterms, this move would clearly rile up Trump country. To tell you the truth, I am clueless about what’s going to happen in the midterms. What I do know for sure is that the tree of liberty says it’s content to be watered with the tears of libtards for now.

Senator Feinstein needs to be held to account for how all of this was handled. If no one is punished for withholding evidence or information in that manner that caused all of this trouble, this will happen again and it will be worse. At the very least, there should be ethics charges, which is kind of a joke, as democrats have NO sense of ethics or morals and are the most reprehensible people I have ever seen. I’m still waiting for her to go through the same exhaustive questioning as to why she had a Chinese spy on her payroll for two decades, all the while she and her husband profited immensely from ties to Chinese businesses. In fact, I sometimes wonder if most of this circus about Kavanaugh was just a scheme to distract from her prison-worthy dealings.

I hope we’re witnessing the death throws of the Democrat party of communists and global elite whores. Those Democrats in Red States are more concerned about their own hide, especially with Republicans leading in all five states.  How much leverage will Chuckie and old Nancy have threatening to withhold campaign $$$, committee assignment and office space size/location? What the left counts on is that any cockamamie scheme they come up with will be pushed by their surrogates in the media and force fed to the voters. It appears that finally, the media does not have the pull that it once did, and people are beginning to think for themselves (Democratic constituency excluded). The pages from the Democratic play-book, slander, lies, harassment, cheating, have a shelf life of about a week and a half before the public gets sick of it.

Wanna know how the dimms operate? Check out that picture of Feinstein and Murkowski. Zoom in on it, look at Feinstein’s face and posture. She is a real monster. Dimms just love to love her. Sick bunch.

A recent poll shows 71% of people polled think the economy is great. When Obama was president, the number was in the 30’s. Hopefully, there will be no “blue wave”. Nevertheless, get out and vote.

No sleep until November 6th.