Writer, Rob Marstrand analyzed a 2012 paper by Robert J. Gordon for the Centre for Economic Policy Research. He’s a professor at Northwestern University in the USA. The paper, called “Is US economic growth over?” Gordon’s main point in the paper is that a huge amount of what the past innovations achieved was unique. New innovations will struggle to make such big changes to our lives, our productivity, and our standards of living. There will still be economic growth. It’s just that it may be much slower. Gordon’s basic idea is that the high growth rates of the past were caused by unique factors that can’t be repeated. In turn they are being replaced by headwinds such as demographics, education, inequality, globalization, energy and the environment, debts and deficits which could lead to much slower growth in the future.

All of this is also a reminder of something else, according to Rob. The big growth today is going on elsewhere. The low hanging fruits of productivity growth are still being picked in other parts of the world; the world’s emerging markets.

Below is a chart that illustrates the performance of three MSCI stock indices – Emerging Markets, USA and Europe – since 1987 (earliest data for all). All are measured in US dollars – so we’re comparing apples with apples – and include dividends – so we’re looking at total returns. The outperformance has been driven by superior earnings growth (specifically earnings-per-share, or EPS). 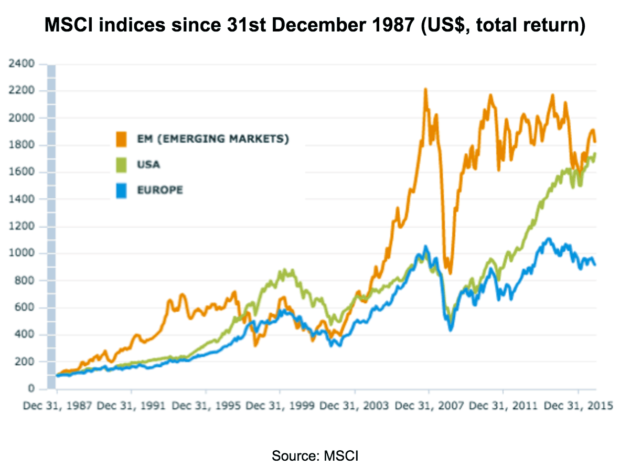 Source: ofwealth
According to a recent report from PricewaterhouseCoopers (PwC) – “The World in 2050” – the rate of relative progress has been staggering. The report compared the “G7” group of seven developed countries with the “E7” group of seven large emerging economies. The G7 consists of Canada, France, Germany, Italy, Japan, UK and USA. The E7 includes Brazil, China, India, Indonesia, Mexico, Russia and Turkey. In 1995 the E7 economies were about half the size of the G7, using GDP at “purchasing power parity” (PPP) exchange rates. By 2015, just 20 years later, the two groups were about the same size.

With all this happening, traders that are betting on emerging markets’ growth thinks that the emerging markets funds could see further upside after logging a stellar first quarter. One popular emerging markets exchange-traded fund, the iShares MSCI Emerging Markets ETF (EEM), has gained 13 percent year to date and attracted $674 million in fund flows in that time per FactSet. The S&P 500 ETF (SPY) is up just over 5 percent year to date. “I think we’re going to see continued outperformance of the emerging markets,” Richard Ross, head of technical analysis at Evercore ISI, commented Monday on CNBC’s “Trading Nation.” “If you had [emerging markets] up 13 percent, more than twice the S&P, with crude down 10 percent, then you likely also had Mississippi State over UConn and you had South Carolina and Oregon in your Final Four; you just didn’t have it,” said Ross, who has apparently been up on his March Madness brackets.

According to Rob, we have no way of knowing whether collapse of US or any other developed country growth is inevitable. But, for now, there are good reasons to believe that growth will remain faster in the emerging markets – with the inevitable ups and downs.

See also  Trader Aaron Basile: Rotation Back Into Growth? Markets Float To New ATH To Kick Off Opex/Fed Week
See also  This is what bond and DXY are reacting to, not Fed. Worrying slowing of 'daily' World GDP in 2H ... Stock markets are just waking up!
727 views