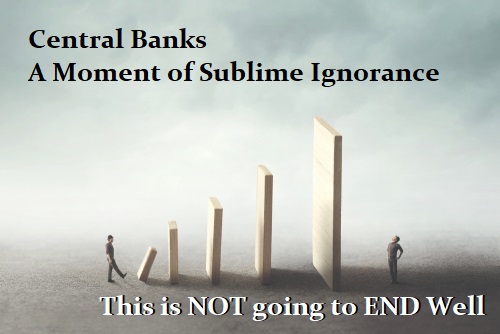 As I mentioned on the Private Blog yesterday, the Federal Reserve declared World War III in the financial markets as the European Central Bank (ECB) was on its knees groveling to please don’t raise rates. The Bank of England (BoE) is in far better shape that the ECB which is on the verge of collapse. The BoE became the first major central bank to raise interest rates to 0.25% from an historic low of 0.1%. They were the first central bank to raise rates since the beginning of the pandemic, while the ECB said it would continue to cut its bond purchases but that is questionable.

See also  It begins: Massive protest in London for the vaccine injured

The ECB is in serious trouble. Where the Fed has allowed previous purchases to mature, the ECB has been rolling everything they have been buying in addition to new purchases. Europe is just doomed and the lockdowns following the agenda of Schwab’s Great Reset make her claims of economic growth a very bad joke.

The ECB is the major crisis. The BoE did not follow that course of action as the ECB so it is not in such a state of need of intensive care. Needless to say, the computer’s projection of rising rates appears to be on target.