Would China and Russia really use the “nuclear option” on the US—in other words, dump Treasuries to punish the US and push their countries higher?

Such a move would cause a severe spike in US interest rates, crash our stock market, and easily push the economy into recession.

It’s an extreme scenario, and many analysts believe it would temporarily hurt their own economies, too. But neither is the risk zero, given the unending tension in the trade and currency wars.

As Mike Maloney and Ronnie Stoeferle discuss in their third video, while US Treasury holdings of both countries are in decline, they are both simultaneously loading up on gold. Russia has been a long-standing buyer on a monthly basis, and China has now added gold to its Reserves for 10 consecutive months. As Ronnie says, “it’s no coincidence that China is updating its gold reserves monthly.”

The gold-buying trend stretches beyond China, Russia and other emerging markets. Many countries in Europe have been aggressively adding gold to their Reserves—for example, Poland, Romania, and Hungary. Further, many of these countries are repatriating their gold from London.

In other words, the gold buying isn’t coming just from countries that are hostile to the US, but also its allies.

As the chart below shows, gold holdings by central banks outside of the developed world have dramatically increased. 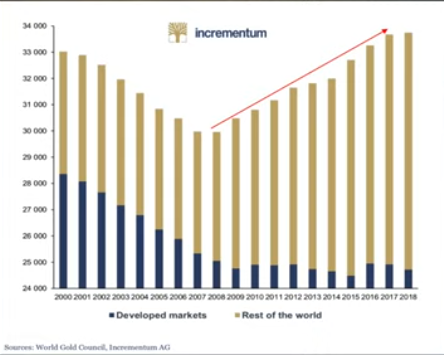 Ronnie points out that many central banks view it as “normal to own gold as a monetary hedge.” You’ll have to see if you can guess who makes the quote at the end of the video—it’s quite eye-opening.

There’s another ramification to all this gold buying. Due to the increase in the amount of gold central banks are buying, less gold will be available in the future. That’s because these holdings wouldn’t come back on the market quickly. Central banks consider gold a reserve asset, something that is “reserved” in case your economy or currency need support.

China and Russia may not resort to the nuclear option, but what they are doing is preparing for a potential monetary realignment. And the best way they think to do that is to buy gold.