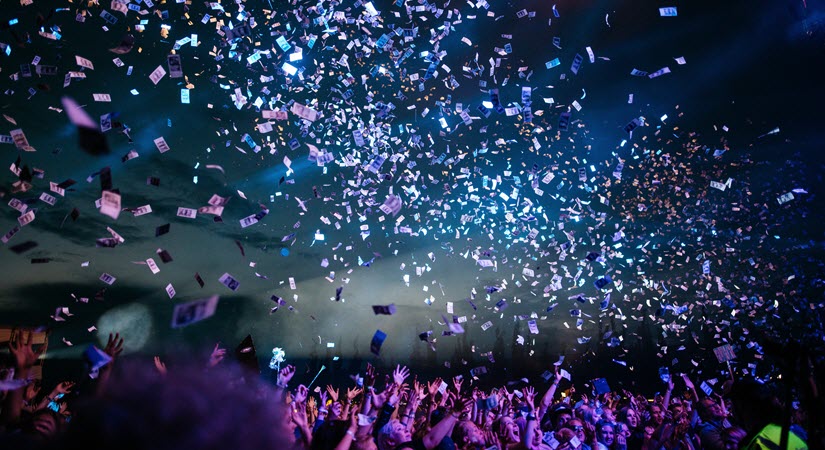 Reality always wins in the end.

It doesn’t matter if you’re excited about the economy or its outlook. Unless some economic scam is being perpetuated (unlikely), fundamentals always play a factor, and guide the U.S. economy through peaks and valleys.

Fundamentals like supply, demand, inflation, deflation, and so on. At some point, even the mainstream media “hype circus” won’t be able to manufacture enough consent to maintain any stock market illusions that things are “just peachy.” Reality always cuts through the noise, and we could be approaching that point right now.

Reality seems to agree. As you can see from the most recent Buffett Indicator, the market is valued 234% higher than GDP (88% above the historical average): 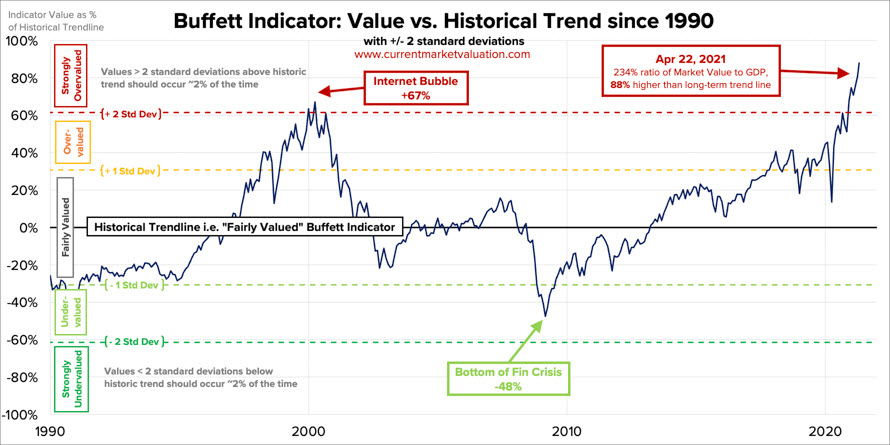 No matter what you think of the indicator itself, the ratio of market value to GDP is plain as day. And its place in history, 2.9 standard deviations above the 30-year average, beats both the top of the dot-com bubble and the highs before the 2008 financial crisis.

Maher explains one possible reason why the ratio line shown on the chart above jumped so dramatically since early 2020:

More money has poured into stock funds within the past five months ($569 billion)… than the previous 12 years combined ($452 billion).

Market optimists like Art Hogan seem to attribute all of this “good market fortune” to, as he puts it, “an explosion in economic activity that likely will have some earnings growth in its wake.” This “likely” earnings growth at some unspecified point in the future doesn’t exactly sound like a prudent bet, does it?

Maher offers another sharp dose of reality that seems to provide a better explanation for all the cash chasing the stocks:

Within the space of one year [the Fed] has ballooned its balance sheet ‑ from a pre-pandemic $4.2 trillion ‑ to a post-normal $7.7 trillion.

Setting the incredible balance sheet bloat aside, here’s how this probably played out:

See also  Reminder: some people would rather destroy civilisation than lose weight.

This flood of speculation , which we’re still watching happen daily, could be mistaken for the “earnings growth” Hogan hopes for.

Until you look deeper into the illusion…

We’ve previously shared a stark example of what “buying at the margins” during a period of stock market mania means for the markets. Now Charles Hugh Smith adds a new way to think about this behavior and market mania as the “Fed’s rigged casino”:

In the Fed’s rigged casino, it’s not only rational to make high-risk bets, it’s rational to borrow as much money as you can to increase your stake and leverage your bets. [emphasis added]

He also provided an anecdote that supports the idea stimulus checks and other “Fed funny money” could be the illusory market growth Hogan pointed to above:

Record inflows into equities is evidence that the middle class has been suckered into the Fed’s rigged casino. Why lose money every day in savings and money market accounts when newbie punters are raking in $250,000 a month playing options on Gamestop?

“I don’t know what the f— I’m doing,” a young man said in a TikTok video. “I just know I’m making money.” He added that he’d been trading stocks for only three days, but “just like that, made $300 for the day.”

We’ve heard it said that “One of the worst things that can happen to you is to win your first bet.” Why? Because that makes the newbie punters think “gambling” is the same as “winning.”

The revolving door: smart money out, dumb money in

Recently, though, it’s not just “dumb money” surging into stocks. Corporations are restarting buybacks with a vengeance:

Why, you might ask? If stocks are so generally overvalued, why in the world would global Fortune 500 corporations buy their own too-expensive stock?

CEOs Goose Their Pay With Buybacks
When companies purchase their own shares, executives are quick to cash out.

According to ZeroHedge: “In short: we are back to the pre-QE market where it wasn’t Fed purchases as much as (debt funded) stock buybacks that provided the relentless dry powder pushing risk assets to all-time highs.” High net worth clients, hedge funds, and institutions are all cutting their exposure to stocks. (Maybe they took a look at the Buffet Indicator, or Tran’s TikTok?) It seems like a shoeshine boy moment…

On the other hand, bull markets can go on for a long time. Like Keynes said, “Markets can remain irrational longer than you can remain solvent.”

Then there’s an old saying on Wall Street:

The bull market ends when the last bull invests their last dollar.

Fed stimulus money will not last forever. Once that last bull’s last dollar is spent, once the Robinhood gamblers’ stimmies dry up, the illusion that everybody wins at the stock market casino will vanish.

That’s when the music will stop, the dancing will stop, the house lights will turn on and an awful lot of people will stand there, dazed, blinking, wondering what happened to all their money. Wondering how they’re suddenly destitute.

It’s not soon to brace yourself…

Before the Last Market Bull Turns Off the Music…

No one wants to be left holding the bag. But you won’t have to settle for a grim financial future, if you prepare yourself now.

If your experience with the stock market casino has been profitable, congratulations! It might be smart to follow Nick Maggiulli’s advice and lock in some of your paper profits:

Sell down a portion of your shares, diversify your wealth, and create a minimum standard of living that you can’t fall below. Establish a safety net… Fund your children’s 529 accounts. Pay off your mortgage. Hell, buy your dream car. I don’t care. Just take the money.

Diversify your portfolio as you see fit, consider different asset classes, and adjust your exposure to risk as necessary. Adding physical precious metals like gold and silver can help reduce volatility and provide a base of stable, lasting value, especially when the bull market party ends.