Another example of how a dishonest media manipulates political perceptions and narratives. Multiply it by a thousand times a year, year after year, and you understand the liberal privilege in this country. 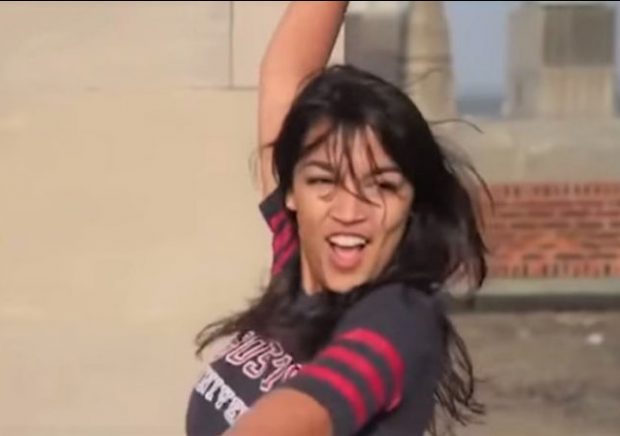 Did you hear the one about Republicans trying to shame Alexandria Ocasio-Cortez over her college dance video, and being angry about it?

That claim echoed through many mainstream media outlets late last week into the weekend. But it was a media fabrication, Fake News in the worst, most devious way intended to shape public perception. Multiply this incident by thousands of times, and you can understand how manipulative mainstream media is, and how major news outlets are able to frame a narrative of evil, mean Republicans that influences our politics, particularly among younger people.

I first learned of the video when I saw tweets about the supposed shaming and anger.

I’m pretty sure, but not positive, that it was a Newsweek article I first saw being circulated:

Shortly before the 29-year-old became the youngest congressman ever sworn in to office, several conservative Twitter feeds shared a video of her dancing on a rooftop. The video, featuring her dancing to Phoenix’s “Lisztomania” in an apparent homage to The Breakfast Club, appeared to be taken from Ocasio-Cortez’s time at Boston University.

One Twitter user, whose handle referenced the QAnon conspiracy theory popular among supporters of President Donald Trump, tweeted the video with the accompanying insult: “Here is “America’s favorite commie know-it-all acting like the clueless nitwit she is…High School video of “Sandy” Ocasio-Cortez.” 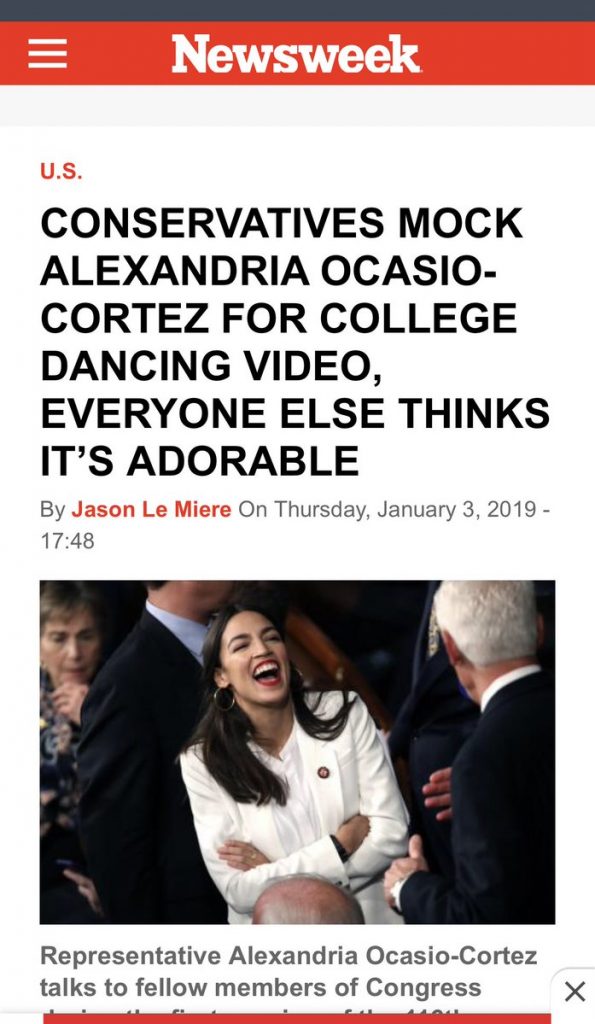 But I didn’t understand what it was all about, because I had not seen anyone trying to shame Ocasio-Cortez about a video, or expressing anger about it. No one.So I started to look into it and found the video linked. It’s a fun video from when Ocasio-Cortez was in college, and it’s a take off — apparently — on a scene from the movie The Breakfast Club.

It’s a fun video. Why would Republicans try to shame her with it, and why would they be angry about it?

But that’s not how the media played it. Newsbusters documents how the NY Times, in an article which appears to have been revised recently, originally put this in the context of “right-wing” efforts against Ocasio-Cortez:

The dance video — a mash-up of 1980s dance moves from the movie “The Breakfast Club” and the music of “Lisztomania,” by the French band Phoenix — proved to be too endearing to many social media users. Some also saw a right-wing effort to undermine Ms. Ocasio-Cortez, a liberal Democrat known as “AOC” among her fans.

Since Ms. Ocasio-Cortez, a self-described Puerto Rican “girl from the Bronx,” was elected in New York in November, she has been a target of conservatives and far-right groups. She won political notice after jolting the Democratic establishment by defeating an incumbent congressman to win the primary for New York’s 14th Congressional District in a virtual landslide in June.

I try not to tweet on the weekend but this is on point and important. The story was completely made up. Fake News for all to see. (Also often controversies are started by anonymous accounts that are actually left wing journalists. I’m guessing that’ll be exposed more this year.)

Benny Johnson posted on Twitter how the anonymous account in the Newsweek article appears to be the only source cited by numerous media outlets that ran with the story:

He linked to Benny Johnson’s documentation of how the false claim spread in the media:

Can anyone on the internet find me a *single* human Republican (not an anonymous bot account) that was offended by AOC dancing.

This should not be hard, right?

So where’s the evidence?

Where is the evidence that *any* Republican was offended?

Where is the evidence that *any* Republican shamed her?

Where is the fact-check on this by the “Democracy Dies in Darkness” crowd?

It’s been remarkable the last few years to observe the beehive group-think mentality of the media on stories like this, Mueller, Russia, Trump, 2016.

No evidence. No facts. Just propaganda for the left, nicely packaged.

Here are images of some of the headlines Johnson posted. While the headlines themselves don’t mention the GOP or conservatives or Republicans, that was the narrative set by Newsweek and social media based on a single anonymous Twitter account: 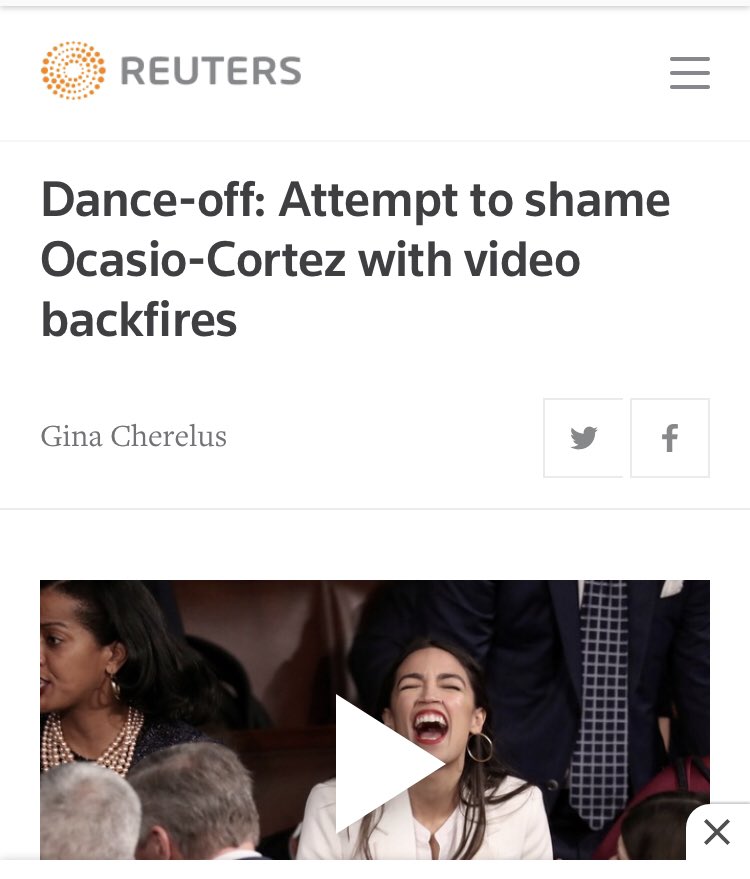 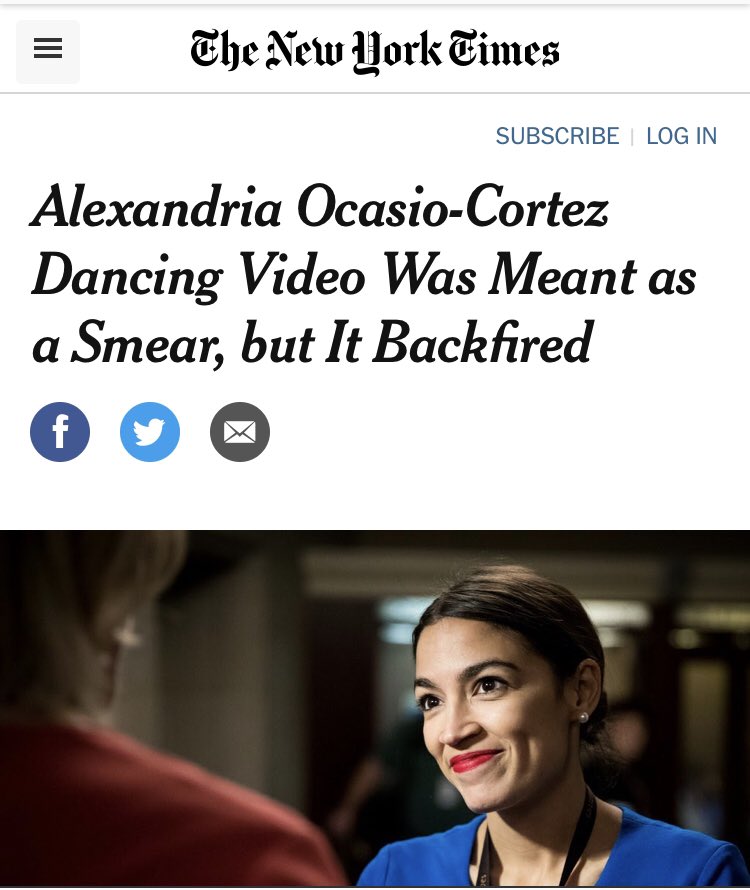 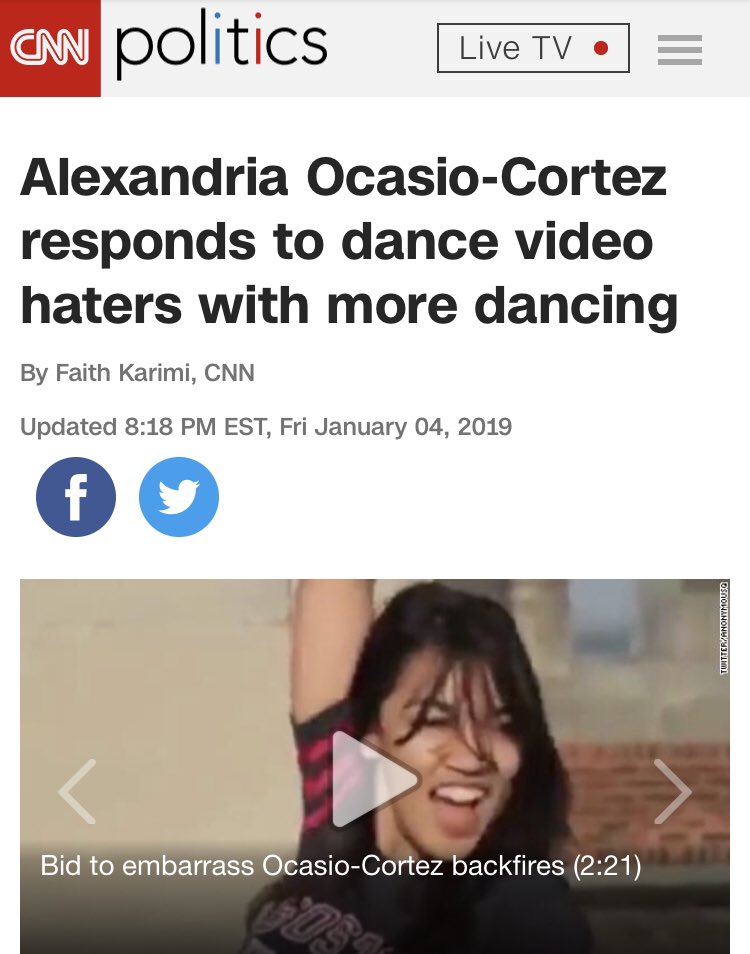 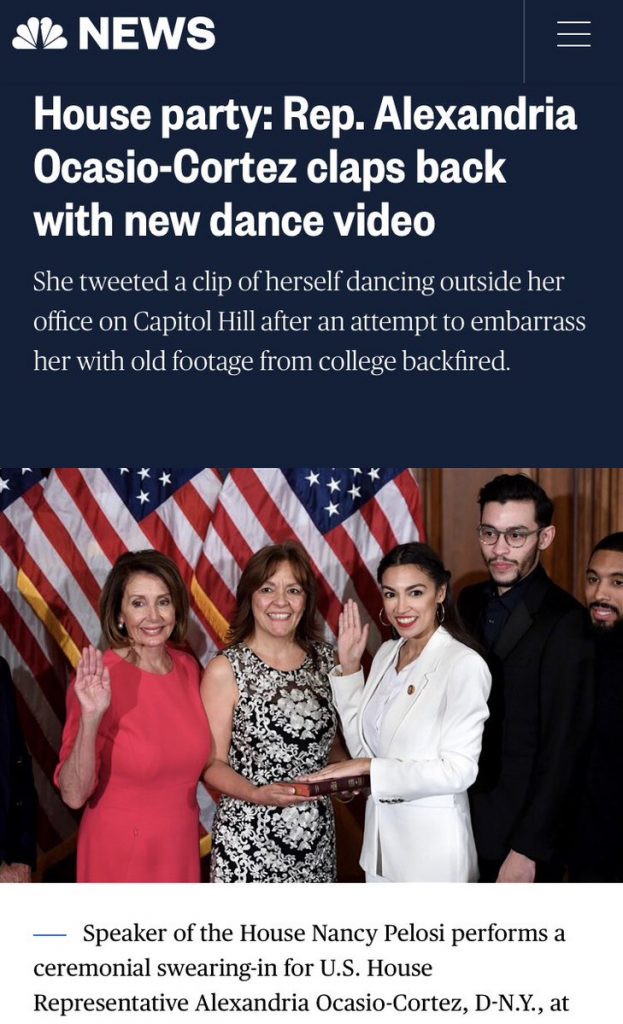 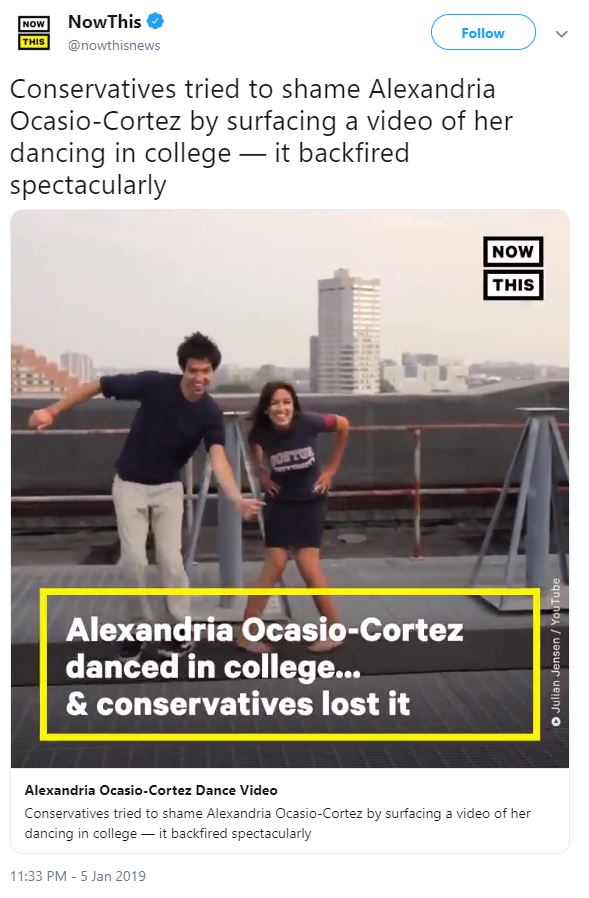 Ocasio-Cortez posted a short dance clip with her at the House office that has been shared over 150,000 times and liked almost 800,000 times:

I hear the GOP thinks women dancing are scandalous.

Wait till they find out Congresswomen dance too! ????????

Have a great weekend everyone 🙂 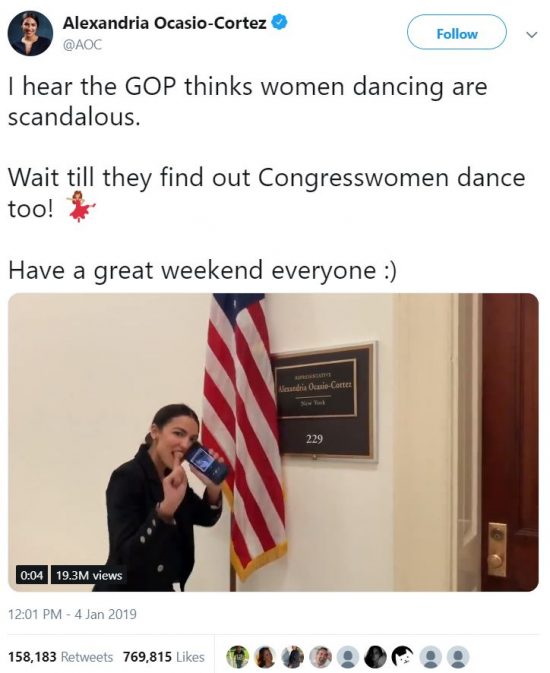 This was a media invented fabrication.But now it’s part of the political landscape. Here’s how an author at the L.A. Times plays it, Right-wing blowhards are having a tough time with this whole women-in-power thing in Congress:

Having calculated that savaging House Speaker Nancy Pelosi wasn’t firing up the he-man pitchfork crowd as much as they had hoped, conservatives are now trying to smear Ocasio-Cortez as young, dangerous, naive, stylish and a good dancer. They also seem unaccountably panicked that she was once known as Sandy.

To many of the attacks, Ocasio-Cortez has issued Twitter clap-backs that deftly surface the barely concealed sexism of her detractors. When conservatives this week tried to make hay out of a dance video she made in college, she made another dance video, chiding the GOP as prigs who hate women who dance.

Like that fabrication that Sarah Palin said she could see Russia from her backyard, the media has created an alternative reality that becomes political truth.

In isolation, the Fake News about Ocasio-Cortez’s dance video doesn’t make a difference. But it’s not in isolation. It’s an example of how a dishonest media manipulates political perceptions and narratives. Multiply it by a thousand times a year, year after year, and you understand the liberal privilege in this country.