www.youtube.com/watch?v=V3wVJIWIjBA
www.dailymail.co.uk/news/artic…
Trump has the golden touch in first full month in office: Construction boom fuels job growth, unemployment is down and wages are up
U.S. employers added 235,000 new jobs in February, the first full month of Donald Trump’s presidency
About 95,000 of those were in the manufacturing sector, and another 58,000 are in construction
The labor participation rate is now 63 per cent, the highest it’s been in nearly a year
Stock markets celebrate
You’re seeing the start of a robust economic expansion, but you won’t hear about it in the media because its favorable for Trump
twitter.com/Pamela_Moore13/status/840276392692613122
Trump’s first 50 days: 235k jobs, cut debt 68B, stock market record high, killed TPP, border crossings down 40%, revitalizing coal industry, manufacturing at its most robust since 1984, small/medium biz confident about future, EO to end sanctuary cities and more

With Donald Trump approaching his first 50 days in office and with today’s news that the U.S. has added 235,000 new jobs, it’s truly astounding to consider what Trump has achieved in just the short time he has been president.

– Trump is already beginning to fulfil his promise of being the best jobs president ever.

U.S. employers added jobs beyond expectations in both January (238,000) and February (235,000), with the unemployment rate falling to 4.7% and wages growing 2.8%. According to Bloomberg, America’s labor market is getting better “by any measure”.

– Trump has cut the U.S. debt burden by $68 billion dollars.

Since the day of his inauguration, Trump has wiped $68 billion off the national debt, which had ballooned to $19,947 billion under Obama.

– Manufacturing is at its most robust since 1984.

The Philly Fed Index, a survey of how well manufacturers are doing, hit its highest level since 1984.

– Small and medium businesses are confident about the future.

The NFIB Small Business Optimism Index is at its highest level since 2004. Economic confidence is surging.

Trump reduces debt in first 50 days by over $60 billion. I must have missed this story on ABC, NBC, CBS, FOX, CNN, MSNBC, and NY TIMES & Washington Post. Hmmmm 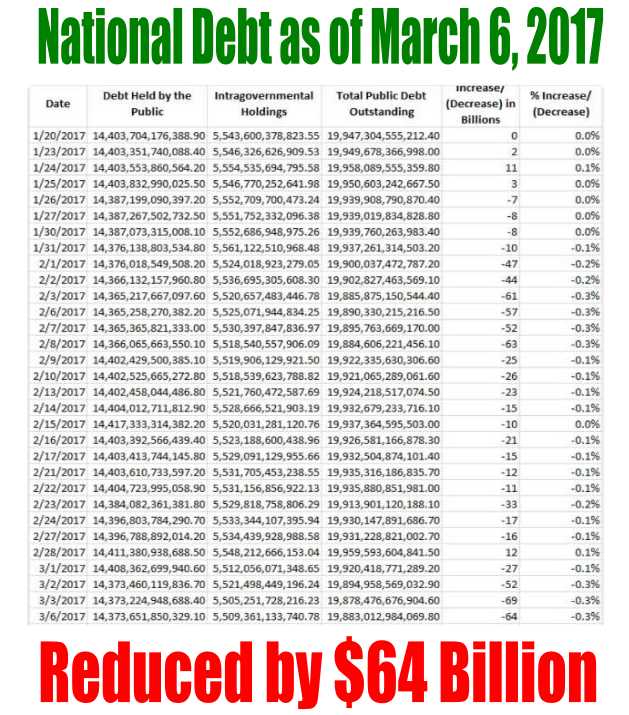 Trump DOJ reportedly plans to send fleet of judges to illegal immigration detention centers to solve the backlog of over 550,000 cases — Trump is dispensing speedy justice with the efficiency of a well oiled machine; this is both humanitarian and upholding the law!

See also  Trump's $DWAC stock, the SPAC that merged with Trump Digital & Technology Group, breaks the Internet: It’s up over 1,200% in two days.
See also  Democrats Make It Impossible To Have Empathy
1,311 views

2 thoughts on “OUCH! TRUMP HAS REALLY BAD NEWS FOR DEMOCRATS”