Skip to content ﻿
Sharing is Caring!
I can’t get over a state where sheriffs are allowed to make money starving prisoners. And I can’t get over the state and feds letting them do it. This reminds me of stories of Indian agents who were given money to feed the Indians, stole the money and let the Indians starve. To death. Hard to believe there were and are people like that. 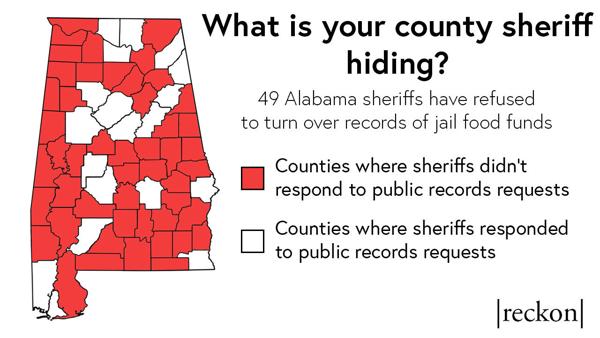 Alabama Appleseed and the the Southern Center for Human rights requested documents showing how sheriffs spent their jail food funds and how much those sheriffs put in their own pockets. 49 sheriffs ignored the requests and are fighting the public information request in court.

I’m looking back in our archives at the same story, written again, and again and again.

Sometimes it ends with the sheriff spending some time in jail.

Other times, it doesn’t.

But always it begins with the food fund.

Under Alabama law, the state gives sheriffs the funds to feed their prisoners, and while the language is a bit fuzzy, it has been interpreted by some to mean that what’s left over goes to the sheriff as a sort of performance bonus.

That’s one way of looking at it. Another is that it incentivizes sheriffs to starve the inmates in their jails.

Alabama lawmakers say there isn’t enough time to pass legislation governing county sheriffs and their handling of excess money for inmate feeding. They may attack the issue locally, with constitutional amendments in Morgan, Etowah and Cullman counties.

In 2005, a Mobile County grand jury indicted Sheriff Jack Tillman for taking food funds to start a retirement account for himself. Tillman later pleaded guilty to perjury and an ethics violation and gave the money back.

In 2009, a federal judge briefly jailed Morgan County Sheriff Greg Bartlett after he pocketed $212,000 from the fund while feeding prisoners a truckload of old corn dogs he bought for $500. Breakfast, lunch and dinner — for three months.

Even though Morgan County remained under a federal court order to spend its jail food money on jail food, Bartlett’s successor, Ana Franklin, stroked herself a $150,000 check which she invested in a shady used car lot run by a felon previously convicted of bank fraud. Franklin was held in contempt of court for violating the federal consent decree and fined $1,000.

And now comes Etowah County Sheriff Todd Entrekin who, over three years, pocketed at least $750,000 of left over jail food money, according to his reports with the Alabama Ethics Commission. As Reckon’s Connor Sheets has reported, this was around the same time Entrekin bought a $740,000 house in Orange Beach.

And yet, other sheriffs keep taking.

Entrekin has gone on TV multiple times since then to plead his case, all but saying he’s the real victim here, and the national media have hooked onto a story so absurd, of course it came from Alabama.

And that’s all on the sheriffs — because they can’t follow a simple law, the Alabama Open Records Act.

After the latest funny business in Morgan County, the Southern Center for Human Rights and Alabama Appleseed sent public records requests to 66 of Alabama’s 67 counties other than Morgan to see how much money those sheriffs were putting in their pockets.

Some county commissions have taken control of jail food service from their sheriffs, and those sheriffs quickly replied that they didn’t have anything to do with it anymore.

Monroe County Sheriff Thomas Tate dutifully turned over his records, even though they showed he had pocketed $110,000 over three years.