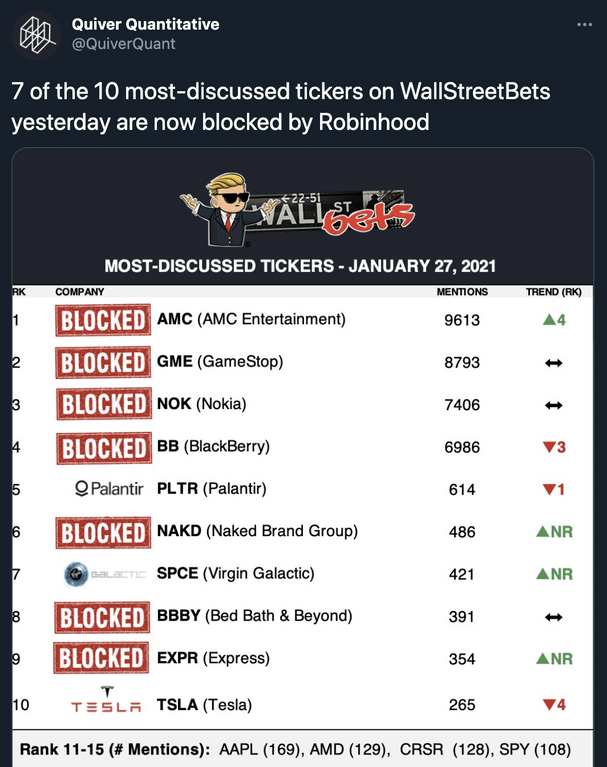 Throughout social media, angry users reported the inability to buy the stock — only to sell. Barstool Sports’ Dave Portnoy, who became a popular trader as the pandemic shuttered sports and fans turned to the markets, chimed in as well.

“Either @RobinhoodApp allows free trading like they say they do or they die. It’s really that simple,” Portnoy tweeted. Searches for AMC Entertainment (AMC) on the app also came up blank. (AMC, BlackBerry (BB), Nokia (NOK), and other stocks were among those that have gotten huge boosts from the Reddit forum.)

Past performance is no guarantee of future results: ‘Scumbags:’ This old tweet from Robinhood is coming back to haunt them in a big way: Robinhood has framed the decision as a way to “help our customers navigate this uncertainty” in its blog post. The Verge meanwhile noted one hedge fund suffering amid the GameStop surge was Melvin Capital Management, which another hedge fund, Citadel, has since bailed out. Citadel’s founder is Ken Griffin, who also founded Citadel Securities, a big investor in Robinhood that also works with TD Ameritrade and Charles Schwab.

It’s the return of what Michael Walsh would call “the Permanent Bipartisan Fusion Party:” Exit question: “So, is it over?” GameStop Shares Are Collapsing, Pelosi Says “Will Be Reviewing Issue.”

As the “Wu-Tang Financial” account tweets, “The congressional hearings on this GameStop activity gonna be even more boomer cringe than the social media ‘grillings’ where it was so clear our Great Leaders have no clue how most of society functions on the internet.”

UPDATE: It’s pretty rare for the Zodiac Killer and Evita Peron to be on the same page: