Natural disasters are sudden and terrible events in nature that cause widespread property damage and loss of human life. The coronavirus pandemic does not technically count as a true natural disaster. As if 2020 weren’t already one of the worst years ever, there was also substantial economic damage from more “traditional” natural disasters as well. Our latest visualization charts the destruction throughout 2020 for both total and insured losses. 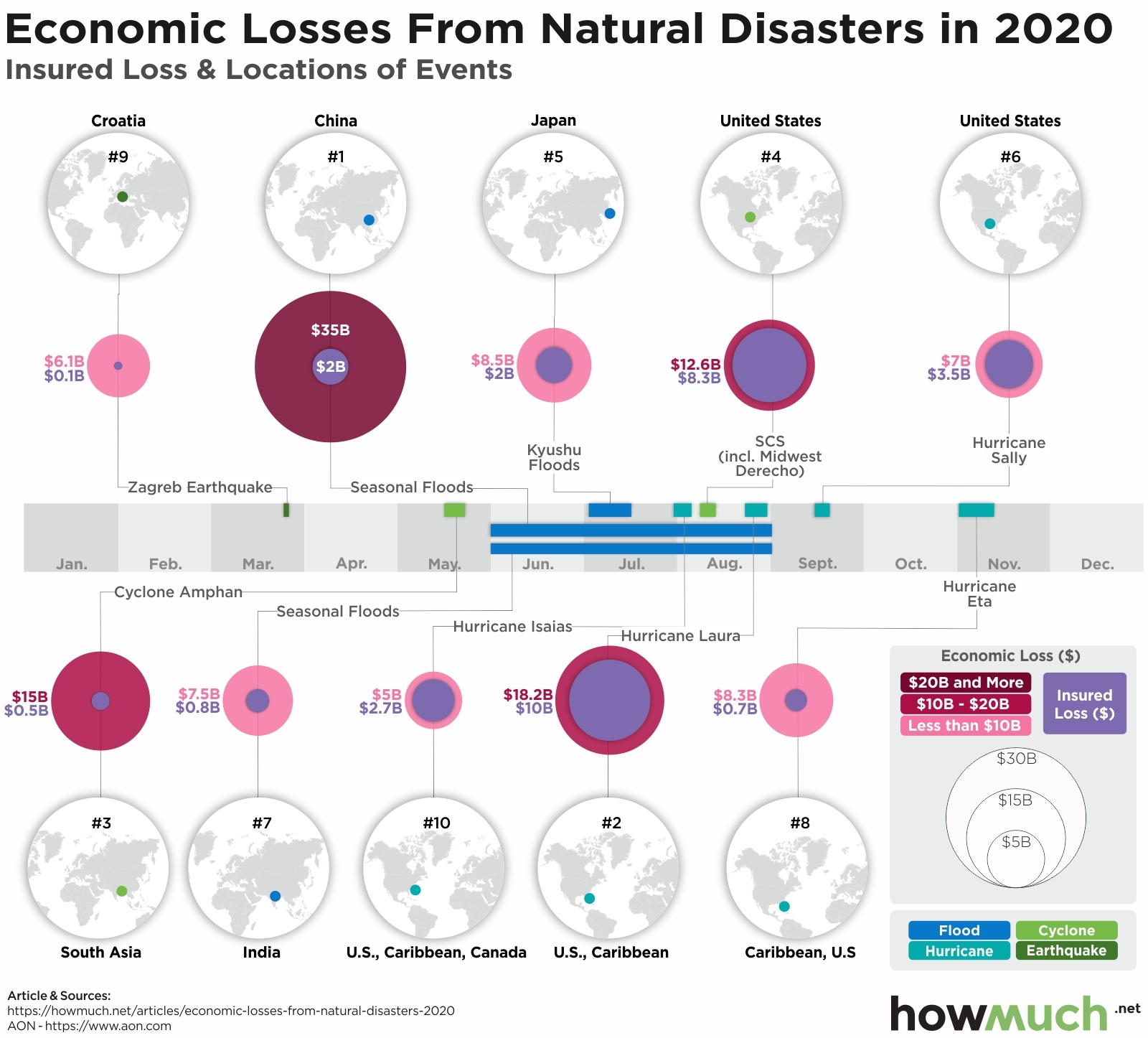 We found the figures for the top 10 worst natural disasters in 2020 thanks to an annual report from Aon. Some of the figures represent researchers’ best approximation of total economic costs and might be changed when complete assessments are done. We plotted both the total financial cost of each natural disaster as well as the amount insured across a timeline for 2020. We also added a quick map of where the event occurred, creating an intuitive snapshot for the most challenging year yet in this century.

Our visualization illustrates the magnitude of economic loss last year. The top 10 worst disasters account for some $123.2B in damages out of a total $268B catalogued by Aon. But this economic impact was not distributed evenly around the world. None of the top 10 disasters occurred in the Southern Hemisphere, and 7 happened in the summer months from May through August. The single worst event was a flood that occurred in China over the summer, totaling an incredible $35B in destruction. Only $2B of that was covered by insurance.

Our visualization tells this deeper story about the true toll of natural disasters, especially for uninsured property. Out of the total $123.2B in natural disaster damage, only $30.6B was covered under insurance. In other words, property owners were personally liable for recovering over $92B in losses. In fact, although 5 out of the 10 worst disasters occurred in the U.S., almost all of the damages to Americans was covered by insurance. Compare that to the situation in Asia, where $33B of uninsured property damage hit China in a single flood alone. It is precisely because floods can be so economically damaging that the U.S. subsidizes flood insurance.

Although major natural disasters clearly don’t happen all the time, they can be catastrophic if they hit a small business. That’s why it is smart to carry insurance, and our business interruption insurance guide is a great place to start.