– The global economy is wobbling and is predicted to grow at just 3.3 percent this year
– Trade tensions, policy uncertainty taking a toll on confidence
– WTO on Tuesday cut its forecast for trade growth in 2019 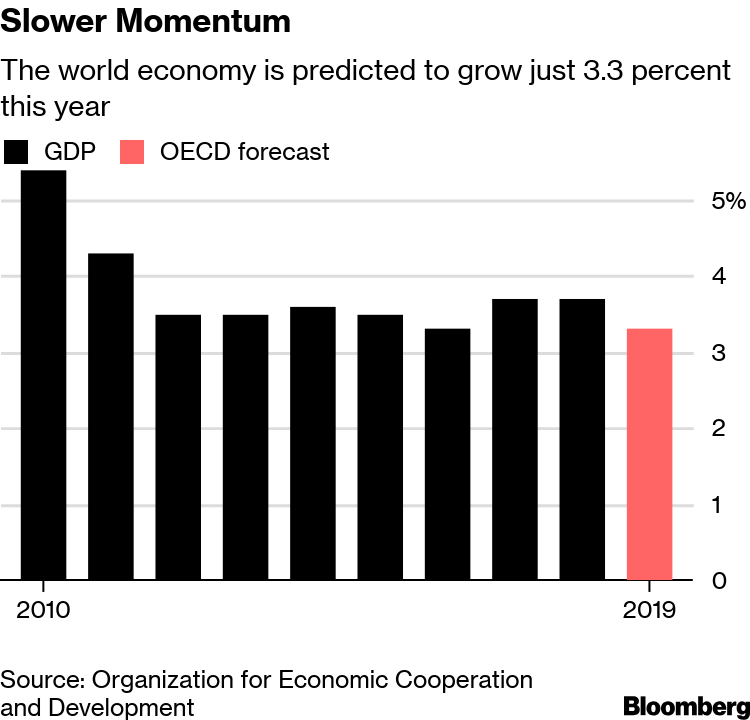 The global economy is wobbling in 2019, giving rise to recession fears and forcing the world’s central banks to consider renewed policy easing.

The stresses have prompted repeated forecast downgrades by governments and other authorities. On Tuesday, the World Trade Organization slashed its 2019 trade projection to the weakest in three years. The OECD cut its economic forecast last month and warned of downside risks that could mean an even worse outcome.

Across trade, equities, currencies and interest rates, here are a few reasons analysts are worried about the global economic outlook:

U.S.-China trade talks sputter on, without any clear sign of resolution. The Chinese economy has been a difficult one to pin down, sliding more than expected and then improving in fits and starts. That’s feeding into a broader malaise in global demand, which has shown up in the form of dramatically slower trade flows.

While quarterly data show a frightening drop at the start of 2019, a more timely Bloomberg Economics dashboard of 10 critical gauges has pointed to ongoing weakness. German companies’ sentiment showed a glint of hope in March after six straight declines.

And the pain is felt acutely in Asia, home to some of the world’s most export-reliant economies. Purchasing manager indexes across the continent are only starting to show hints of a China-led rebound after several months of souring.

Trade talks and the tariff wars have fed into the guessing game around how politics and policy will interfere with the fundamentals. Also in the mix are Brexit, a spate of elections — some of them messy, like Thailand — and the sharp turn in the global monetary policy cycle. China’s policy uncertainty has been especially pronounced as analysts try to pick apart how officials will manage the slowdown there.

In the U.K., Brexit has become the weight that won’t go away, still holding back capital spending and broader economic growth, as London-based Bloomberg Economics economist Dan Hanson shows. The British Chambers of Commerce said this week that investment intentions are at the lowest in eight years as firms refuse to commit to projects in such an uncertain backdrop.

The financial markets have taken some of the developments in stride, while still showing signs of stress.

It’ll be a gauge to keep an eye on, but for now, the Bloomberg U.S. Financial Conditions Index — which measures the overall level of financial stress in money, bond and equity markets — is at least looking better than it did since touching a 2 1/2-year low in December. A positive value in that measure indicates accommodative financial conditions, while a negative value indicates tighter financial conditions relative to pre-crisis norms.

READ  "It’s About To Get Much Worse" Supply Chains Implode! Are You Prepared To Starve? We’re Really Close

Emerging-market officials especially are attuned to any durable signs that the greenback will return to the strengthening path that added a lot of pressure in 2018. The dollar remains in a relatively stronger band against a basket of major currencies, particularly compared with its position a year ago.

Adding to the gloomy hard data is the fact that analysts just haven’t been very good at forecasting recently. Releases have been surprising on the negative side more often — across the U.S., Europe and Asia-Pacific.

It’s even more concerning when you consider economists’ terrible record on predicting recessions.

Since Federal Reserve chief Jerome Powell branded it “one of the major challenges of our time,” stubbornly low inflation has garnered even more attention around the world. Despite unprecedented monetary support, central bankers have been constantly frustrated in their attempts to generate sustainable price growth. Central bankers’ worries about price growth aren’t going away.