A bell curve is a useful tool to show how Hillary Clinton’s current scandals are evolving and how they may ultimately resolve themselves.  The scandals center on whether Clinton broke any laws regarding national security with her private email server or whether she traded government favors for contributions to the Clinton Foundation or payments to her husband for speeches he made.

Below is a typical bell curve used to reflect a typical distribution of events as they unfold over time. All possible occurrences are equally distributed around the most probable event, which creates a downward-sloping line on each side of the peak. 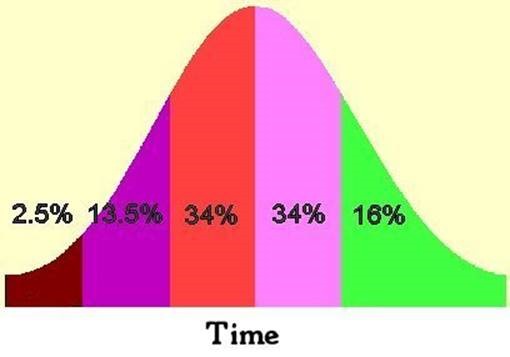 Let’s start at the left side of the bell curve, shaded in brown.  This is the time period during which the alleged scandalous behavior took place, unbeknownst to the public.  By definition, scandals are born and thrive in the shadows.  No one is supposed to find out what occurs during the commission of a crime or an ethical breach.  It is a safe zone for the perpetrator.  The activities are never intended to be an approach ramp to a bell curve, which exposes the improprieties to public scrutiny.

The area of the curve, shaded in purple, is the timeframe when the Clinton scandals first emerged and appeared before the public.  The existence of Clinton’s private email server first came to light during the Benghazi investigation.  Questions regarding the Clinton Foundation and potential conflicts of interest first appeared in the book, Clinton Cash, by Peter Schweizer.  Both events brought public attention to potentially unethical, if not criminal, behavior on the part of the Hillary Clinton.  As the budding scandals emerged, they drew increasing attention from the media and the public.

During the red portion of the scandal, more information has come to light as congressional, media and law enforcement investigators uncover more details and damning evidence supporting allegations of questionable conduct.  We are currently in this section of the bell curve.  Over 1300 emails that Clinton had on a private server have been deemed classified so far.  Making matters much more troublesome is the fact that a full-blown FBI investigation, involving a team of 150 agents, is taking place in parallel with Clinton’s presidential campaign for the White House.  It is possible that other players within the Clinton circle could be drawn into the scandals, some of whom may decide to divulge what they know about the scandals in exchange for leniency.

The crest of the bell curve, indicated by a transition from the red to pink shaded area, is where the matter reaches a turning point and begins to resolve itself.  The Clintons, in the past, have been able to navigate across this delicate threshold by simply letting the march of time lance the boil.  As other newsworthy events take center stage, the scandals recede slowly but surely from the public’s eye.  The Clintons count on the public’s short attention span to win the day.  As long as no criminal charges are filed against them, they know that the public and the media, as well as congressional committees investigating them, will grow wary and the scandals become yesterday’s news.  After all, if the government doesn’t take criminal action against them, the public will conclude that the whole affair was just a tempest in a teapot. The interest in the scandals dissipate as it slides down the right side of the bell curve until it reaches the shoulder of the curve, shaded in green.  At that point, the scandals become additional footnotes in the list of prior Clinton scandals, and the Clintons once again ride out the storm.

On the other hand, the bell curve could play out in a way inimical to Hillary Clinton.  We don’t know yet, but the transition from red to pink, could evolve in a completely different way.  The crest of the curve could be the point where the Justice Department indicts Hillary Clinton on various criminal counts relating to her private email server and/or conflicts of interest involving the Clinton Foundation during her tenure as Secretary of State.  Indeed, a criminal referral to the U.S. Attorney General by the FBI after it completes its investigation might be sufficient to derail Clinton’s presidential campaign.  Any serious negative development, backed up by hard evidence, stemming from ongoing criminal and congressional investigations could also be the catalyst marking the peak of the bell curve.  If Clinton is forced to terminate her candidacy for president, it would begin an unwelcome slide for her down the right side of the curve.  As she approaches the shoulder of the curve, she will slowly fade from public view as she deals with the fallout of the scandals and law enforcement authorities.  Under this scenario, she would enter the green zone potentially facing jail time and/or public disgrace.

Within the next few months, Hillary’s scandals will resolve themselves as we approach the top of the bell curve.  If past is prologue, Hillary will make the transition over the curve unscathed.  On the other hand, these scandals, under the klieg lights of a presidential campaign, might actually have consequences where she is held to account.