If you haven’t heard about the massive gun control movement by now, you’ve obviously been living under a rock. The political establishment has used every dirty trick in the book to demonize anyone who criticizes the teenage gun control activists from Marjory Stoneman Douglass High School. However, that doesn’t change the fact that most of their arguments are irrational at best. In this article, I’ll go over the popular arguments used by the anti-gun protesters and how to refute them.

The gun control crowd often makes the argument that the 2nd Amendment doesn’t apply to things such as semi-automatic weapons because it was written during a time when muskets were used. An easy way to disprove this argument is by examining the history that led the founders to create the 2nd Amendment. The founders were students of ancient Greek and Roman history. Consider this quote from the Greek philosopher Aristotle:

This quote was written well before the invention of firearms. The founders got their ideas from a time when swords and spears were the most efficient weapons, but they still applied the same standards to the much more advanced muskets and cannons of their time.

Firearms were also much more advanced during the late 18th century than most people realize. Check out the video below to see Steven Crowder debunking this common argument by examining the semi-automatic and fully automatic weapons of that time.

Appearances can be deceiving. Someone who is uneducated in firearms will take one look at the AR-15 and assume that it is a military weapon. To make matters worse, there is a highly dishonest piece of propaganda going around in which military veterans equate the AR-15 to the M-16, which is actually used in the military.

However, there is one massive difference between the AR-15 and the M-16: the AR-15 is semi-automatic while the M-16 is fully automatic. This means that with an M-16 you can simply hold down the trigger and the gun keeps firing. The fully automatic feature can dish out way more damage to the intended target than an AR-15 can. In reality, military grade weapons are far superior to AR-15s. Examining the basic functions of both the AR-15 and the M-16 immediately disproves this common gun control argument.

See also  Government Spending is Out of Control

Many gun control advocates attempt to make the argument that civilians don’t need guns because they would never be able to defeat a tyrannical government. These people are obviously uneducated when it comes to history. There are plenty of examples in which an outnumbered and technologically less advanced group has defeated a military behemoth.

The American Revolution, the Vietnam War and the Soviet-Afghan War are a few notable examples. In all these cases, the victor was a much less advanced society. However, through asymmetrical/guerilla warfare techniques, a group like the rice farmers in Vietnam were able to defeat the world’s greatest superpower. 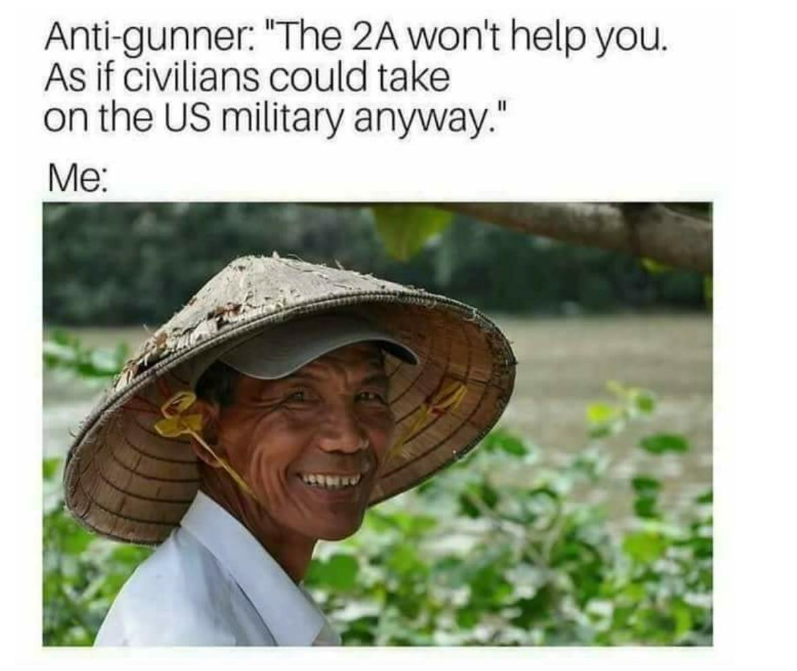 These arguments also miss the primary goal of warfare, which is to conquer a nation or territory. Weapons such as fighter jets, tanks and nukes can obliterate a society but not necessarily conquer it. Would the US military use all their power to turn the country into rubble? I highly doubt they would destroy their own money-making machine. Furthermore, would the individuals in the military be willing to destroy their own communities? I highly doubt that as well.

“The Second Amendment Only Applies To Well-Regulated Militias”

This misinterpretation of the 2nd Amendment could easily be the most frustrating to refute. First, let’s look at the founders’ intentions for the right to bear arms.

Thomas Jefferson wrote this in a letter to James Madison in 1787:

George Mason said this to the Virginia Ratifying Convention in 1788:

Samuel Adams said this to the Massachusetts Ratifying Convention in 1788:

George Washington said this to Congress in 1790:

This is also what the Supreme Court decided in the District of Columbia vs Heller case. Here is Justice Antonin Scalia’s reasoning behind the court’s decision to allow private ownership of firearms:

“The Second Amendment is naturally divided into two parts: its prefatory clause and its operative clause. The former does not limit the latter grammatically, but rather announces a purpose. The Amendment could be rephrased, “Because a well-regulated Militia is necessary to the security of a free State, the right of the people to keep and bear Arms shall not be infringed.” See J. Tiffany, A Treatise on Government and Constitutional Law §585, p. 394 (1867); Brief for Professors of Linguistics and English as Amici Curiae3 (hereinafter Linguists’ Brief). Although this structure of the Second Amendment is unique in our Constitution, other legal documents of the founding era, particularly individual-rights provisions of state constitutions, commonly included a prefatory statement of purpose.”

See also  Male flight attendants with stubble in dresses... It’s real and it’s out of control.

The arguments formed by gun control activists are almost entirely based on their emotions. If you can navigate through their emotional pleas, their arguments are quite easy to refute. I hope I have given readers more ammo (pun intended) to dismantle these poorly formed arguments. Millions of dollars are now flowing into the anti-gun lobby with midterms coming up. The left will gain back power sooner or later, which means this gun control movement will likely get much worse. Stay informed and speak out against the will to infringe on our natural rights.