The funny thing about slashing your budget to survive a recessionary storm is that it works wonders whether the recession is deep or shallow.

We know that after 10 years of expansion, a recession is baked in. Trees don’t grow to the moon, etc.

We also know that some people will hardly notice the recession while others are devastated. I addressed this in The Recession Will Be Unevenly Distributed(January 10, 2019). A retiree on Social Security and a bit of income from Treasury bonds isn’t going to be affected much, and a power couple in Washington DC who are high up the food chain in the federal government will also shrug off the recession.

What we don’t know is what kind of recession we’re going to get. It’s been almost 40 years since the U.S. experienced a “real recession,” i.e. a downturn that was severe and not limited to narrow slices of the economy.

The recession of 2008-09 was over before it started, and the damage was largely limited to the speculative housing-mortgage sectors and finance and everyone who was over-leveraged in the housing market.

The recession of 2000-02 was limited to the tech sectors that were exposed to the dot-com meltdown and investors in speculative dot-com companies.

The recession of 1991-92 was brief and shallow by historical standards.

The “real recession” of 1981-82 laid waste to numerous sectors and spread devastation throughout the economy. Interest-sensitive industries were crushed, and this impacted sectors such as government that are typically impervious to recessions.

Even further back, the Oil Shock recession of 1973-74 was also an economy-wide upheaval.

Those pundits who aren’t denying a recession is baked in are busy assuring us it will be a mere slowdown. What the well-paid pundits of the status quo can’t or won’t discuss is the economy’s fragility and vulnerability to self-reinforcing declines.

I’ve often discussed this systemic fragility as buffers have been thinned and transparency has been replaced with asymmetric information. The neofeudal-rentier structure of our economy is brittle, inflexible and grossly inefficient. As a result, a “downturn” will unleash a tsunami as opaque, brittle skims and scams break down.

Few participants are expecting a “real recession” and so they’re ill-prepared for a “real recession.” Discussing how to weather a recession is akin to discussing oral hygiene and home maintenance: everyone nods their heads at the same old advice, but they don’t actually clean their gutters.

Recessions slash income but leave fixed costs–rent, auto and student loan payments, mortgages, etc.–untouched. It sounds too obvious to be useful but if incomes decline while major expenses remain unchanged, that’s a problem for every household and entity with high fixed costs.

Put another way: fewer bad things can happen to households and entities with no debt and low fixed costs.

The solution to high debt/fixed costs in expansive eras is to increase income.Very few people manage to increase their incomes in recession; most suffer declining income and higher fixed costs as local governments raise taxes to cover shortfalls in their revenues.

The age-old advice to survive recessions is: get rid of debt, diversify the household’s income streams, slash fixed costs and build up some savings.

The more radical the slashing of debt and fixed costs the better. Assuming the household will have to survive a 50% drop in income is a good place to start.

Selling (overpriced) assets to liquidate debt is one way to get rid of debt payments. Eating 95% of all meals at home slashes food/dining expenses, eliminating media subscriptions (and reducing the time spent staring at screens) cuts fixed costs, and so on.

The funny thing about slashing your budget to survive a recessionary storm is that it works wonders whether the recession is deep or shallow. If your income doesn’t take a hit, then you’re saving money to buy recession-discounted assets or spend on important purchases later without having to go into debt.

If your income does take a significant hit, you’re already prepared.

Look at what the 1% own and what the bottom 80% own. The bottom 80% “own” debt and the top 1% owns income-producing businesses and assets. Who is better prepared to survive a “real recession”? Those with zero debt and income streams they control. 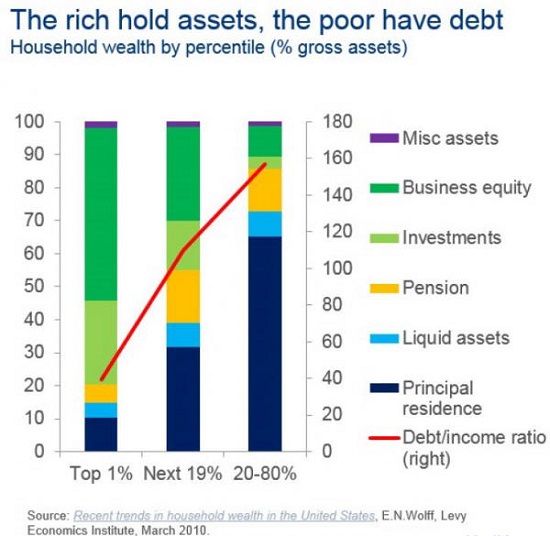