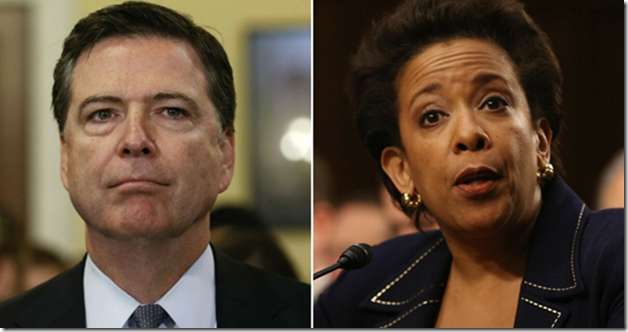 The following translations of Comey’s statements are offered by a professional skeptic after hearing Ex-FBI Director James Comey’s answers to George Stephanopoulis’s questions that aired on ABC last Sunday evening.  You can read a transcript of the interview here:

JAMES COMEY: I went to the Attorney General (Loretta Lynch) and said, “You and I are both going to have public events coming in the next–” I think it was a few days later. “Do you think it’s time to do what the Department of Justice policy permits, in the appropriate case where there’s a public interest that justifies it, confirming that you have an investigation?” And she agreed.

Translation: Since we were both appearing at public events, I wanted to make sure Lynch and I were on the same page.  And I’m glad I did since there was a difference between us as to how to characterize the FBI’s probe into Clinton’s handling of classified information on her private server.  I cannot overemphasize how important it was to carefully coordinate details of one the biggest cover-ups in American history.

GEORGE STEPHANOPOULOS: She– but– she agreed. But you write that she didn’t want to call it an investigation?

JAMES COMEY: That’s right. She agreed. Loretta Lynch I had a great relationship with and still have a lot of respect for. And she said, “I agree. But call it a matter.” And I said, “Why would I do that?” And she said, “Just call it a matter.” And I didn’t know exactly why she was doing that, but I decided in that moment that the whole world would miss the distinction between investigation and matter. And so I dropped it at that point. At my press event, I said– used the term matter, and I was right, the press missed it and said we’d confirmed an investigation.

Translation:  Loretta and I know which side our bread is buttered.  This means we would do everything in our power to clear Hillary Clinton.  There was no way we would jeopardize the candidacy of Clinton, who was clearly the front-runner to be the next president of the U.S. at the time.  And, incidentally, someone who could be our next boss.  Lynch was absolutely correct when she suggested that I call the FBI’s Clinton probe a “matter” instead of an “investigation.”

GEORGE STEPHANOPOULOS: Did– did you think she was doing that to protect Hillary Clinton?

See also  Cities that CRASHED the Hardest during the last Housing Downturn. Might be time to sell if you own in CA, FL, AZ, or NV.

JAMES COMEY: I didn’t know. It worried me. It gave me an uncomfortable feeling because the Clinton campaign, since the matter had come in, the investigation had started in July, had been trying to come up with other words to describe it. They had used “Review” I think, “Security referral,” things like that. And it did worry me that the attorney general’s direction was tracking that effort to avoid using the word “investigation.” And so, to be honest, it gave me a bad feeling. And maybe I should’ve pushed harder in the moment.

Translation: Frankly, I regret that I myself didn’t think of using the term “matter “from the start when referring to the Clinton investigation.

GEORGE STEPHANOPOULOS: Yeah, did you push her on it?

JAMES COMEY: I didn’t because I’ve known Loretta for a long time. We worked a case together in the early 1990s. And she’s a very smart person. And if she’d had a reason that I couldn’t see in Justice Department policy or something, she’da given it to me. But her answer, “Just do it,” told me this is an order from the attorney general. So it’s not improper, it’s a little bit off axis from the actual facts. But people are going to miss the distinction. And so I’m not going to fight this new attorney general. This is not going to be our first battle.

Translation:  Lynch deserves a lot of credit for her brilliant recommendation and her leadership.  Her political instincts were flawless.  Obviously, I was politically tone-deaf in this regard and should have known better than to characterize the FBI’s one-year investigation involving over a hundred agents as anything other than a “matter” — and a minor one at that.

GEORGE STEPHANOPOULOS: You think you should have?

Translation: Why would I push Lynch harder when there was no daylight between us as to how we viewed the Clinton matter?  But that was then.  Now that I am no longer a government employee and I no longer work for Lynch, I don’t mind pushing her under the bus.  Besides, she foolishly got caught talking to Bill Clinton on a Phoenix tarmac and that changed everything.  She should have been more careful.  It was understandable that Bill was getting anxious because his wife had a campaign to run and the cloud over her head needed to be lifted.  He wanted the investigation brought to its foregone conclusion.  And that is exactly what I did a week later when I exonerated Hillary Clinton on national TV.  I seized the opportunity to appear in the spotlight, which I relish.  I believe I did a superb job of convincing the public and legal pundits why Clinton should be exonerated.  I would like to extend my gratitude to Loretta Lynch for foolishly meeting with Bill Clinton and making that possible.  The fact that this interview will air nationwide is another wonderful opportunity for me to dazzle viewers with my brilliance while simultaneously promoting my book, which stands to make me a millionaire many times over.  God Bless ABC and God Bless America.