Every year, migrant workers living in other countries send money back to their home countries. The flow of money earned in one country and sent to another is known as remittances. Remittances account for one of the main forms of international money transfers, in addition to foreign direct investment and development aid. 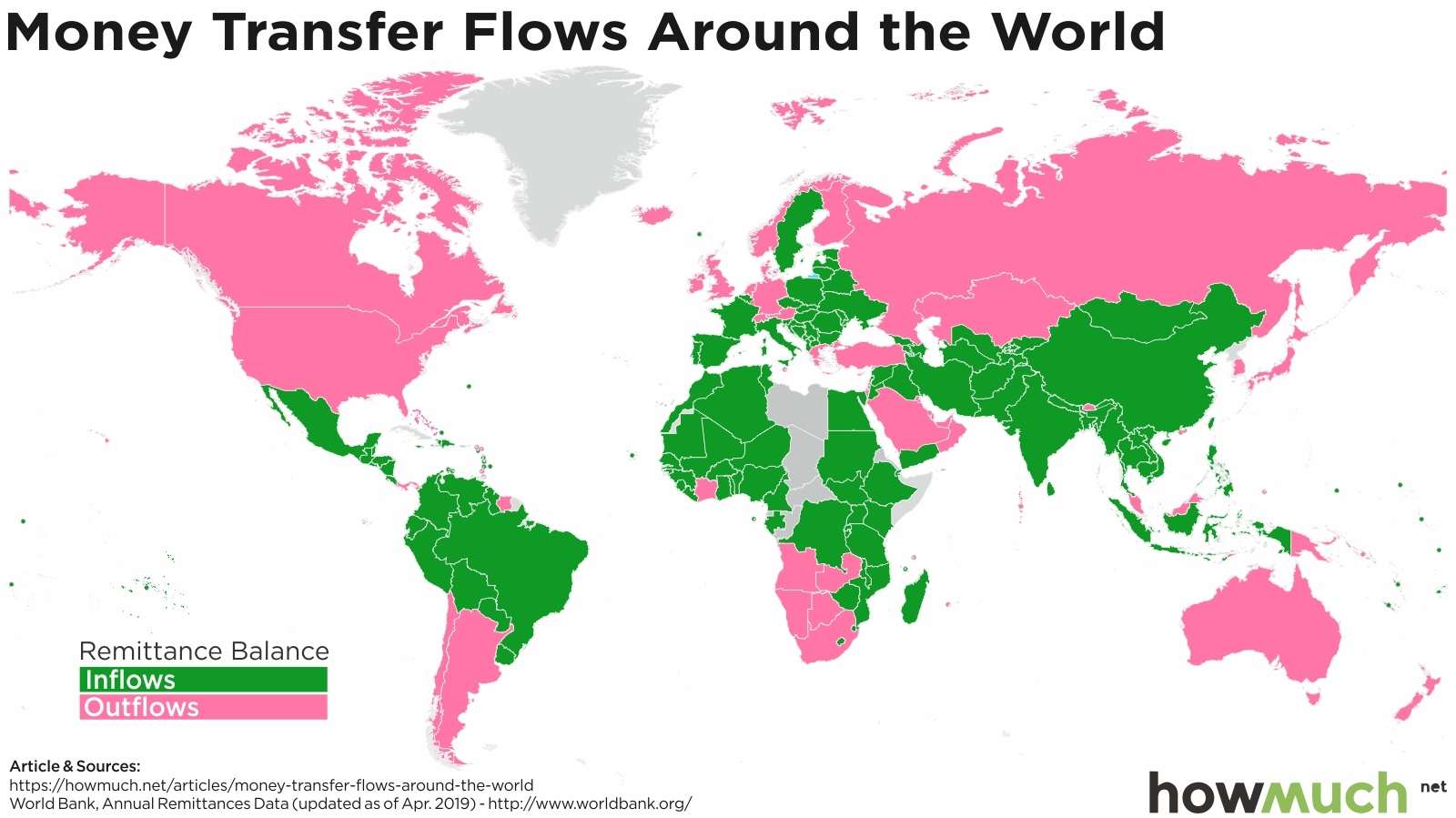 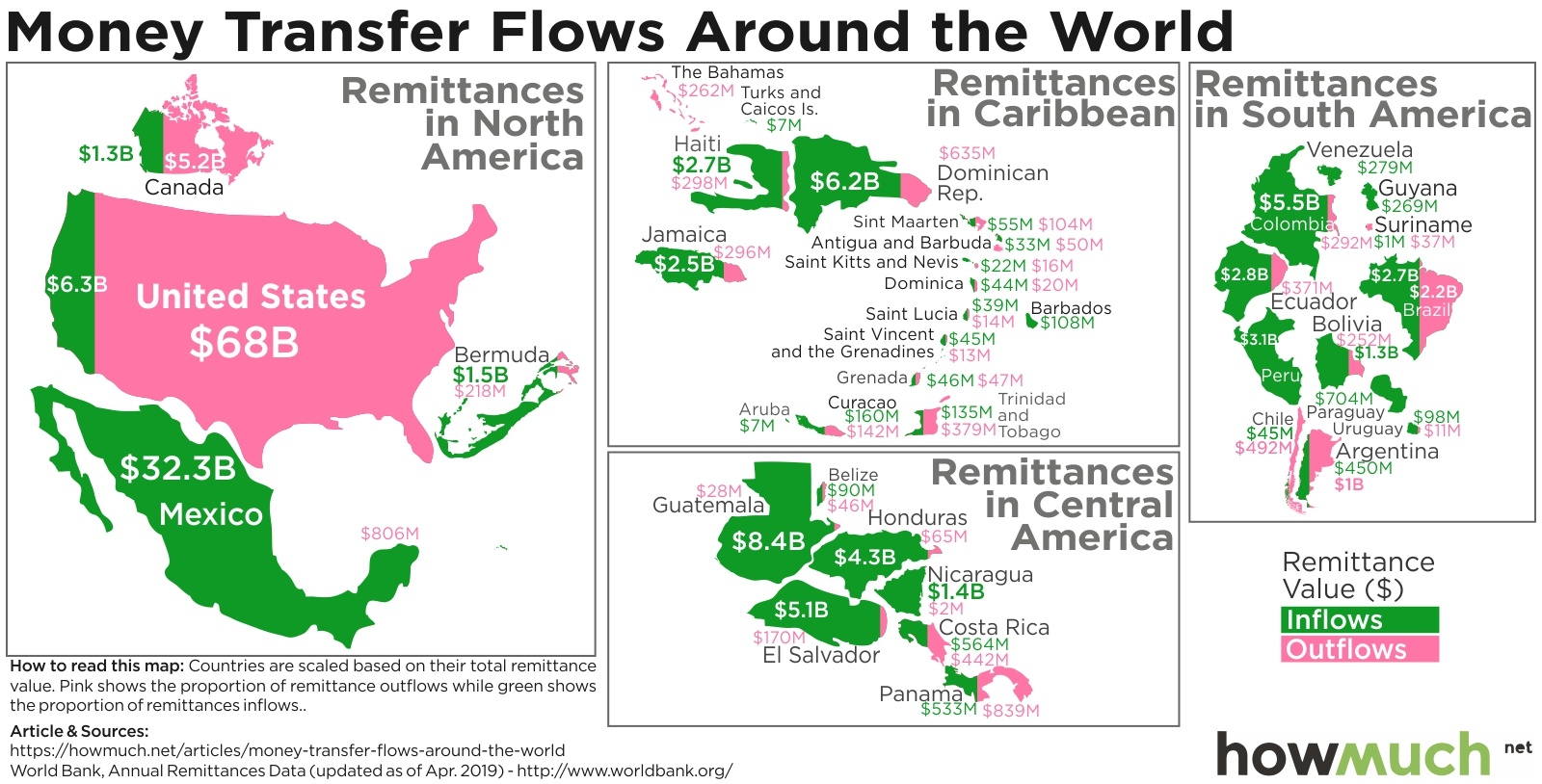 Among all world countries, the U.S. has the largest number of outflows at $68 billion. Conversely, almost all remittances in Mexico are inflows ($32.3 billion). Countries in the Caribbean vary greatly in whether inflows or outflows are the greater proportion of remittances, while countries in Central and South America tend to have more inflows. A few notable exceptions are Chile, Argentina, and Panama, which all have a higher volume of outflows. 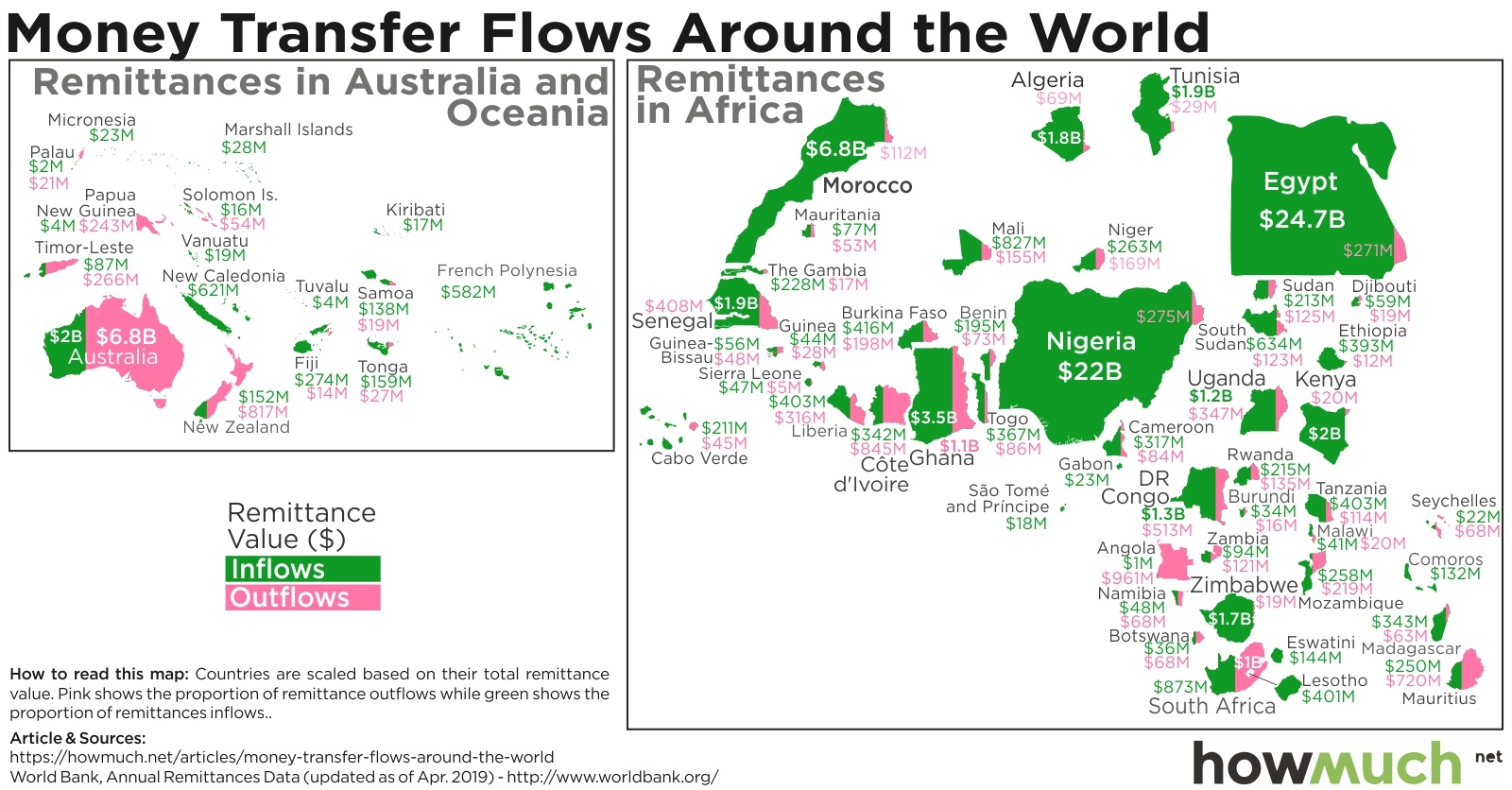 In the Australia and Oceania region, Australia ($8.8 billion) and New Zealand ($969 million) have the highest total remittances. Unlike most of the Oceania region, both of these countries also have a significantly higher proportion of outflows. In Africa, Egypt ($25 billion) and Nigeria ($22.3 billion) have the highest volume of remittances. Interestingly, most of the countries in northern and central Africa have a higher volume of inflows, while countries in the south like South Africa and Angola have more outflows. 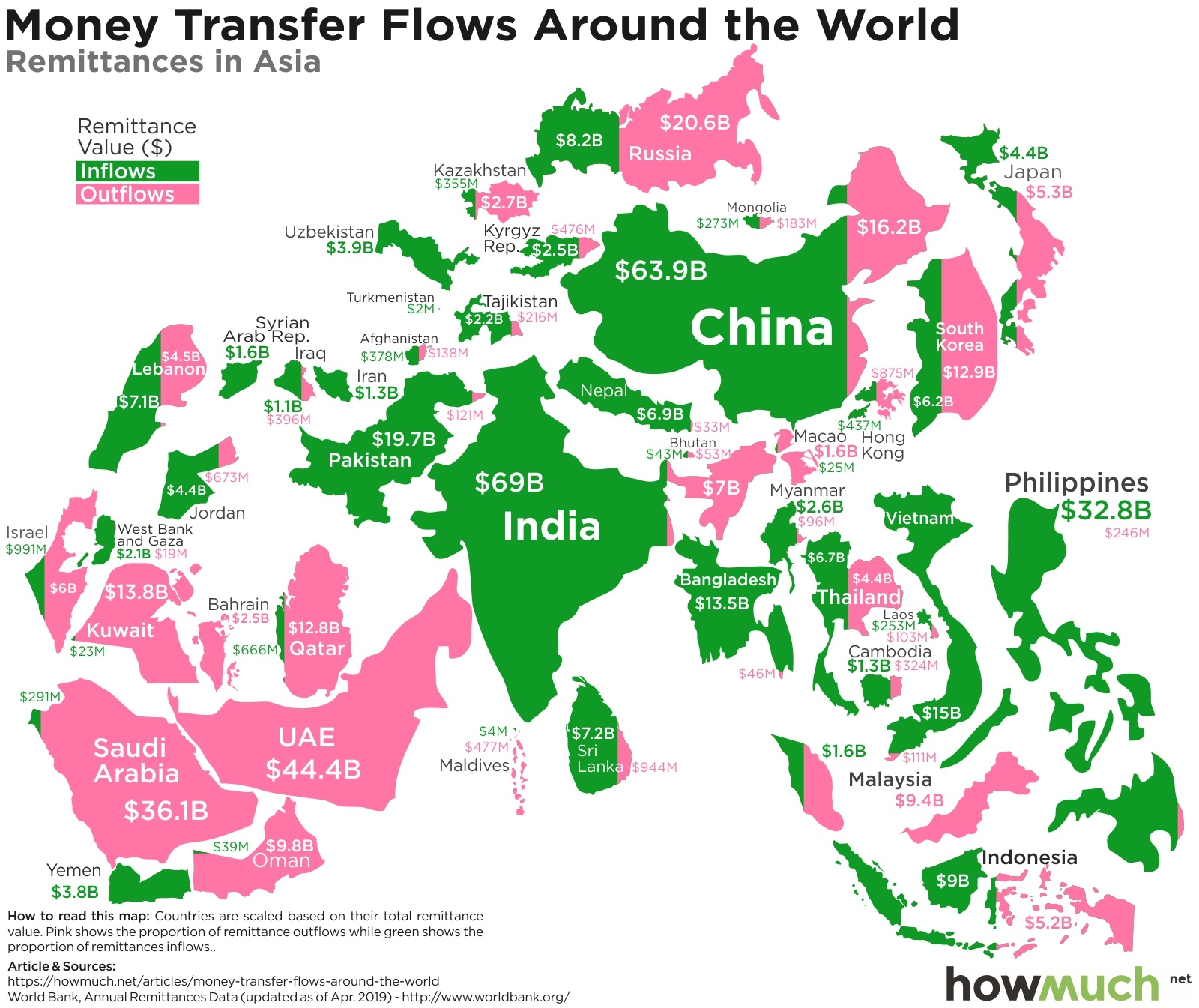 Overall, countries in east and southeast Asia tend to have more inflows than outflows. Outliers include the highly developed nations of South Korea and Japan, which send out more money than they take in as remittances. Worldwide, India has the highest volume of inflows, at $69 billion. By contrast, most countries in the Middle East have a greater percentage of outflows. For example, the United Arab Emirates sends $44.4 billion as outflows, but does not have any significant inflows. 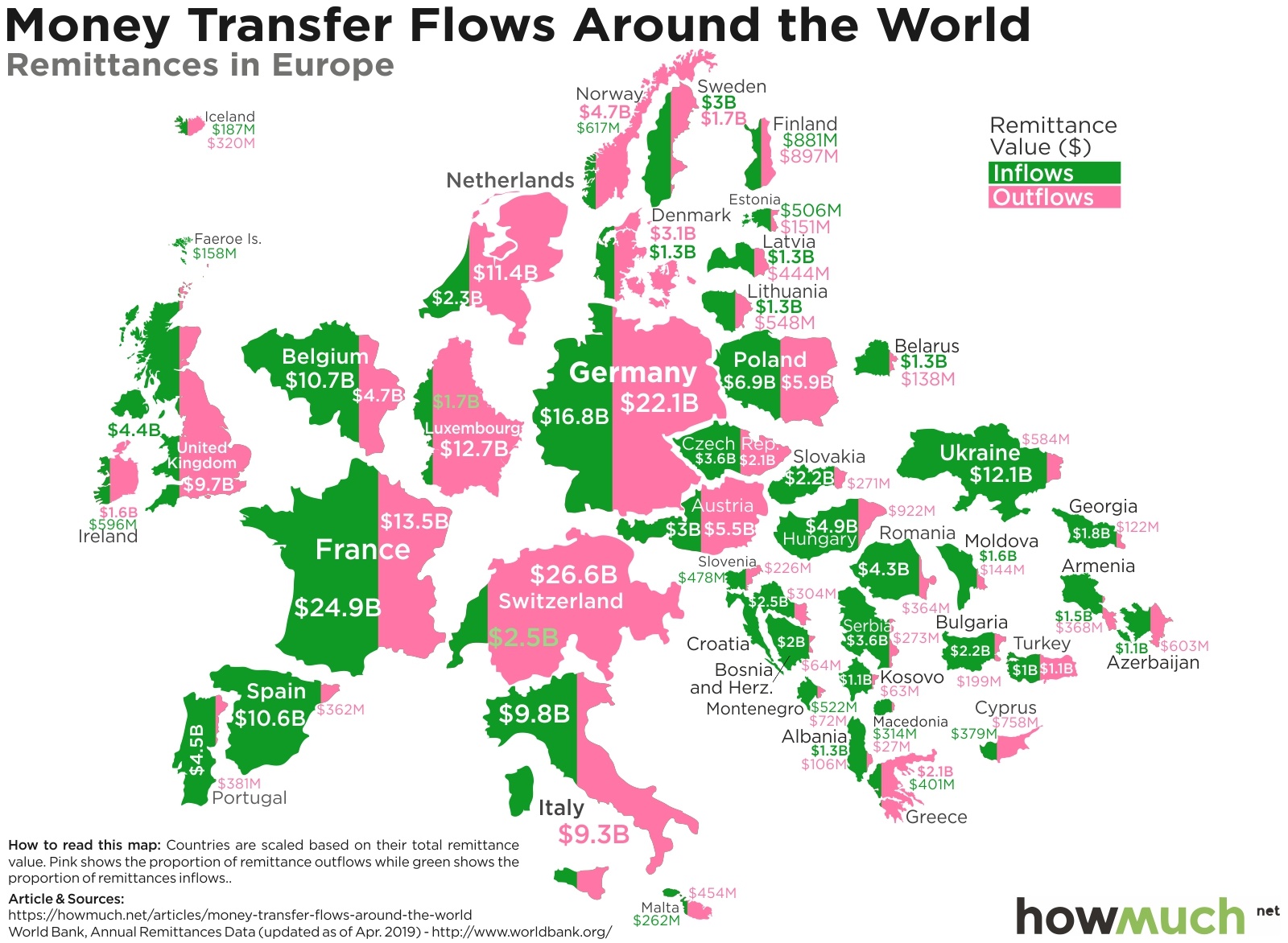 In Europe, wealthy northern and western countries like the UK, Germany, Norway, Switzerland, and Luxembourg have a greater volume of outflows. By contrast, countries in eastern Europe like Ukraine, Hungary, and Croatia take in more inflows. At $38.9 billion, Germany has the highest number of total remittances.

Due to the high cost of regular remittance services like Western Union, new innovations in fintech and mobile banking are flourishing, especially in Latin America and sub-Saharan Africa. There is a lot of money on the line for the providers of these services, and newcomers like the TransferWise “borderless” bank account are entering the race to make money transfers as seamless as possible. Even established businesses are trying to get in on the action. Facebook, for example, wants to add cryptocurrencies to the mix to compete in the money transfer market too. As technology related to money transfer continues to evolve, it remains to be seen how these remittance statistics are going to change.

Have you worked abroad and sent remittances back home? Leave a comment below to share your experience.