Herds get spooked and run. That’s the crash scenario in a nutshell.

We have all been trained by a decade of central bank saves to expect any stock market swoon will soon be reversed by central bank sweet talk and/or rate cuts. As a result of such ever-present central bank willingness to intervene in the stock market, participants have been trained to believe a stock market crash is no longer possible: should the market drop 10%, or heaven forbid, 20% (i.e. into Bear Territory), the Federal Reserve and the other global central banks will save the day with direct purchases (The Plunge Protection Team), happy talk of future easing or, some unconventional quantitative easing measure or a rate cut–whatever it takes, in Mario Draghi’s famous words.

But irony of ironies, such complacent confidence in the efficacy of central bank interventions is actually setting up a crash scenario. Crashes and melt-ups are both manifestations of herd sentiment. Though this is often simplified into greed or fear, this might better be described as confidence in near-term prospects or the lack thereof.

Confidence in the absolute efficacy of Fed intervention breeds complacency, which is the essential backdrop of stock market crashes.

Markets are said to “climb a wall of worry,” that is, move higher as the market discounts potential threats to the ongoing rally. This skittishness, when coupled with ample volume (i.e. plenty of buyers), is the backdrop for sustained rallies.

Crashes don’t arise from a skittish herd, they arise from a complacent herd.Crashes aren’t characterized by skittish participants with low confidence in forecasts and short sellers piling into big bets on declines. Crashes are characterized by the exhaustion of short sellers who have tired of losing money betting against the melt-up, low volume and a herd milling about in complacent confidence the Fed can reverse any market decline.

This chart depicts such a scenario.

3. Every air pocket / dip caused by skittish punters selling is bought as traders are confident in the Fed’s complete control of the market.

6. As volume fades and confidence is the permanence of the melt-up rises, the next sharp drop “surprises” participants, but they dutifully buy the dip.

7. This rebound reaches a lower high, and the sell-off resumes. Unbeknownst to most participants, the herd’s confidence in the Fed’s omnipotence has eroded. Rather than manifest a wall of worry that the market can climb to new highs, the herd is undergoing a loss of confidence.

8. On the next decline, momentum accelerates the drop, and Fed pronouncements and emergency rate cuts do little more than reverse the downtrend for a few hours. The very fact that the Fed has to resort to emergency measures fatally weakens confidence, and selling begets selling. 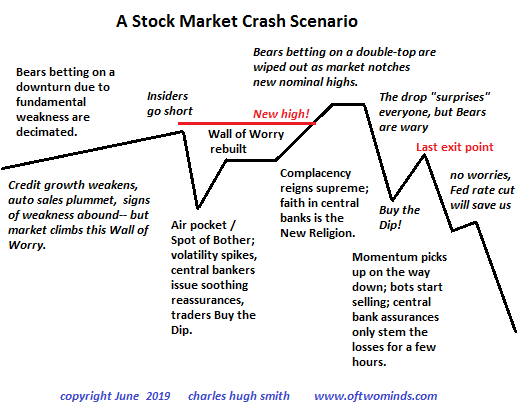 Herds get spooked and run. That’s the crash scenario in a nutshell.