I can’t imagine living in South Africa being any worse.

Here’s the deal: a black kid has shot up his school, injuring four people. The media have focused on the fact that he was, like most school shooters, bullied.

The police have only charged him with aggravated assault. If he says he heard the N word, he can probably get $150 million. The FBI will come in and finish off the four people he shot, because that is justice in 2021 America.

The myth of the White mass shooter is entirely media driven.

Liberals online assumed it was a White kid that did it. Blacks actually commit the majority of mass shootings, and shootings in general in America, but the media outright lies and reports the opposite.

We all know that if a White kid had done this the entire political establishment would be screaming “terrorism”.

The message is that black lives matter more than White lives in today’s America.

We’re now at a stage where the prevailing ideology of this decadent, suicidal empire excuses criminality & violence as an act of morality if the crime is committed by a member of an exalted group.

Consequences are reserved for the immoral deplorables who resist this insanity. I better not ever hear another shitlib say ‘Dylan Roof’ in response to a shooting ever again.

The student in the video above shot several people in Texas yesterday was released on bail. Name me one White school shooter who was released on bail the next day, I'll wait it didn't happen. This country has a black privilege problem, and it's lethal pic.twitter.com/EyO5GGLRkx 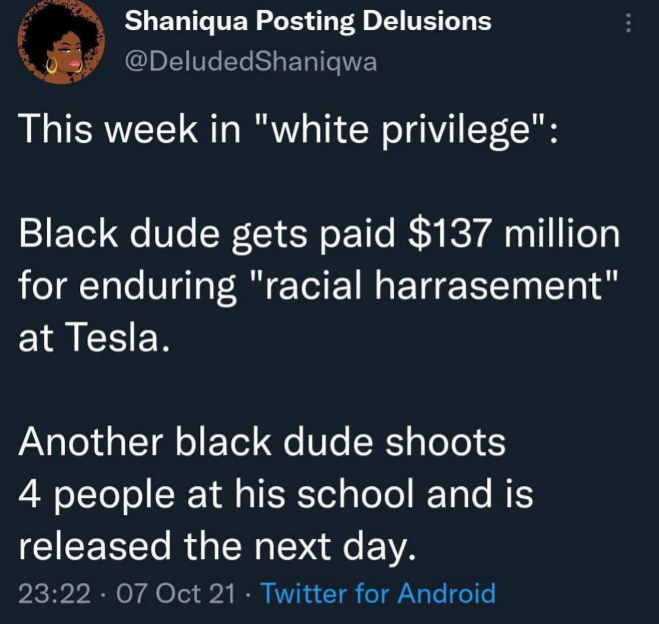 If your criminal relative dies near a cop, and you’re black, you deserve millions.

If you’re black and shoot up a school, it doesn’t even make the national news, and you get released on bail.

But if you are a white grandma and walk into the Capitol with a flag, you get thrown in Federal prison without being charged with a crime.