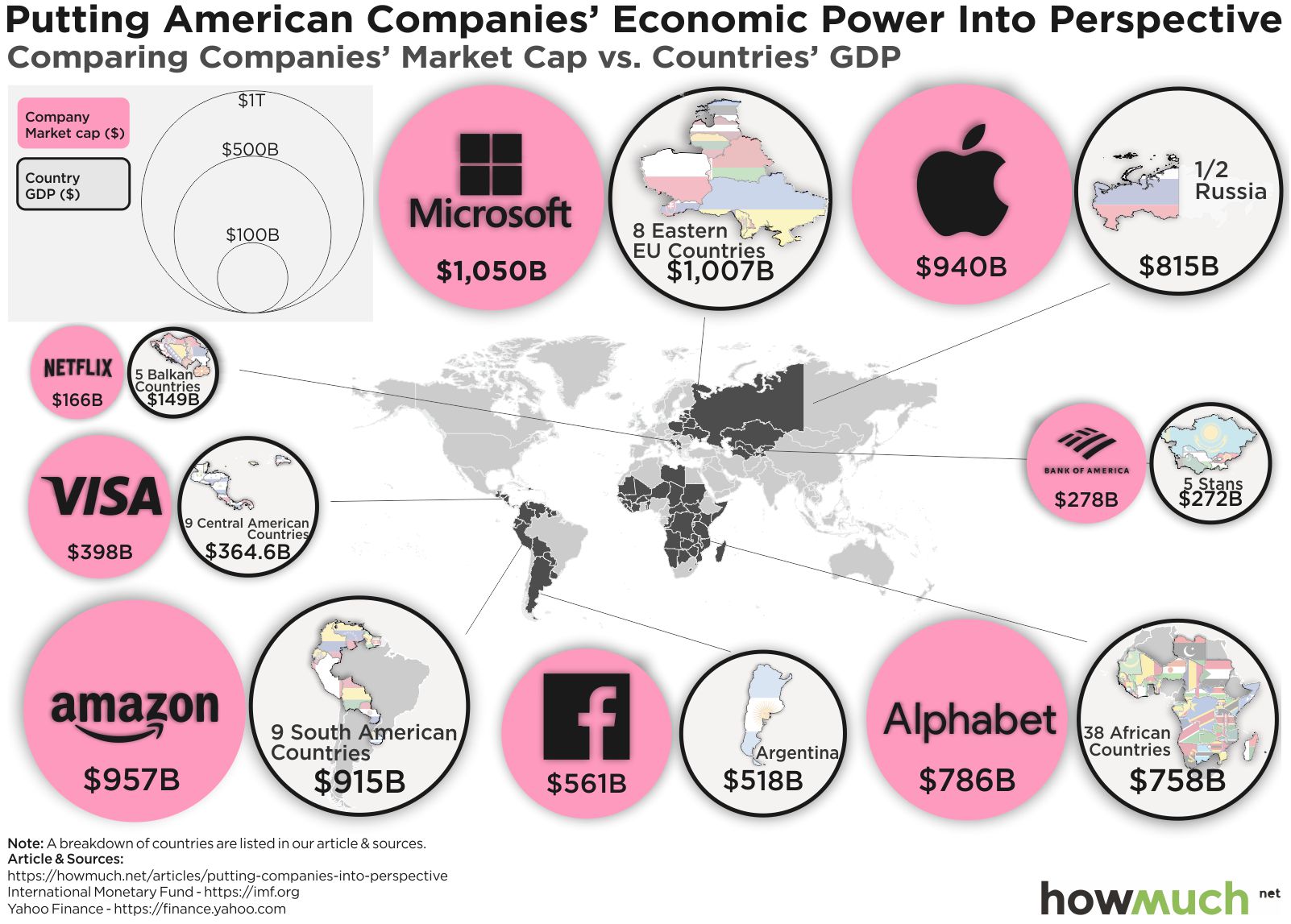 We used information from the International Monetary Fund to compile information about each country’s GDP and Yahoo Finance to find market caps for public companies, as of July 8, 2019. In the visualization above, the pink bubbles represent the companies and the gray bubbles represent the countries or regions that have a similar GDP. The bubbles are sized proportionally to the GDP and market cap values; the greater the value, the larger the bubble. All currencies are expressed in USD.

The first major social media network to go public, Facebook remains a top player in the tech space. In recent years, Facebook has grown through its acquisition of other social media platforms such as WhatApp and Instagram. Facebook has also announced its intention to launch its own cryptocurrency, Libra, further diversifying its offerings. Facebook’s current market cap ($560.622 billion) is comparable to the GDP of Argentina ($518.092 billion), which is the second-highest in South America after Brazil.

Initially founded as a DVD rental store, Netflix is now one of the most popular streaming services in the world. In recent years, Netflix has transitioned from being a database of movies and TV shows to also creating its own original content, such as “Stranger Things” and “Orange is the New Black.” Netflix’s market capitalization of $166.384 billion is greater than the GDP of five Balkan states, including Serbia ($50.651 billion), Bosnia and Herzegovina ($19.881 billion), Montenegro ($5.402 billion), North Macedonia ($12.669 billion), and Croatia ($60.688 billion). These five countries have a combined GDP of $149.291 billion.

The brainchild of Steve Jobs, Steve Wozniak, and Ronald Wayne, Apple has revolutionized the tech industry through its innovative products, ranging from the Mac computer to the iPhone. The company has recently been under fire over privacy concerns, especially related to products like the iPhone and the Apple Watch.  Apple’s market capitalization of $939.678 billion is equal to more than half of Russia’s GDP ($815.3295 billion). Russia has the twelfth-highest GDP in the world.

Big companies’ influence is spreading everywhere, and not everybody likes that. For example, the ECB has already shown some concerns about Facebook’s intention to launch its own currency. Some people are also concerned about the political influence that these tech companies hold; Google alone spent $21.7 million on lobbying last year. As more calls for tech regulation arise, it will be interesting to see how market capitalization changes, if at all.

What surprised you most about big companies compared to different countries’ GDP? Please let us know in the comments.