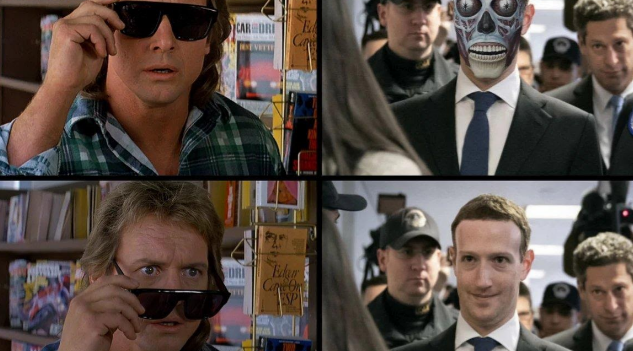 Many of you already heard about the revolving door concept in US politics, also known as regulatory capture,  which is basically corporate cronyism going amok.

To be more precise, regulatory capture means that regulatory agencies like the FDA are dominated by the interests they regulate (Big Pharma), and not by the public interest. The result is that the agency instead acts in ways that benefit the interests it is supposed to be regulating.

This has been happening since the seventies maybe. The revolving door thing means that officials in the executive branch, Congress and senior congressional staffers spin in and out of the private and public sectors, so too does privilege, power, access and, of course, money.

Speaking about our corporate overlords and their politics, it’s amazing that people don’t really comprehend the gravity of PayPal, the biggest internet payment processor with a market share of 93% give or take (a monopoly basically) starting sharing all of its records with the ADL.

Why is this important?

Well, the ADL is a powerful foreign interest group, a Zionist/Jewish organization respectively, primarily based in the US (has branches in other countries, including Israel), founded more than 100 years ago to protect a convicted pedophile murderer (Leo Frank).

The ADL receives funding from various entities, including the US government, business leaders, and mafia money. It’s an established fact that the ADL was connected with Meyer Lansky, Moe Dalitz, Bugsy Siegal, and illegal arms trafficker Hank Greenspun. The ADL gave gangster Moe Dalitz the Torch of Liberty Award. Dalitz was partnered with Galvastan’s Sam Marceo and his brother Rosario of international narcotic trafficking fame.

In recent years, the ADL under CEO Johnathan Greenblatt was one of the main organizations working to defame their political enemies and to censor free speech online. The ADL is a “trusted fact checker” for Twitter, Google/YouTube and Facebook, to name just a few, and they censor any type of discourse they don’t like under the pretense of “hate speech”.

As a corporation, Google and Facebook can implement any policy they choose based on their own backgrounds and prejudices. As a global monopoly, Facebook and Google can abuse or ignore the human rights of their content creators and viewers, while being responsive only to shadowy interest groups like the ADL, operating behind the scenes.

Which brings us back to PayPal: all their records, including people’s real names and addresses would be turned over to the ADL , which by the way supplied confidential information to foreign governments that it obtained from police and federal agencies in the US, i.e. they were spying on US soil back in the 1990’s.

What does it mean? Any records of the donations to any “far right” organization or outlet through PayPal will be an open book for the ADL.

So, they will be starting to make lists of “literal right wing Nazis”, like Trump supporters, conservatives, what have you, and track everyone who they identify as a supporter of hate, i.e. anyone to the right of Greenblatt. Here’s from The Hill:

The new domestic “War on Terror,” kicked off by the riot on Jan. 6, has prompted several web giants to unveil predecessors to what effectively could become a soft social credit system by the end of this decade. Relying on an indirect hand from D.C., our social betters in corporate America will attempt to force the most profound changes our society has seen during the internet era.

China’s social credit system is a combination of government and business surveillance that gives citizens a “score” that can restrict the ability of individuals to take actions — such as purchasing plane tickets, acquiring property or taking loans — because of behaviors. Given the position of several major American companies, a similar system may be coming here sooner than you think.

Last week, PayPal announced a partnership with the left-wing Southern Poverty Law Center to “investigate” the role of “white supremacists” and propagators of “anti-government” rhetoric, subjective labels that potentially could impact a large number of groups or people using their service. PayPal says the collected information will be shared with other financial firms and politicians. Facebook is taking similar measures, recently introducing messages that ask users to snitch on their potentially “extremist” friends, which considering the platform’s bias seems mainly to target the political right. At the same time, Facebook and Microsoft are working with several other web giants and the United Nations on a database to block potential extremist content.

The actions of these major companies may seem logical in an internet riddled with scams and crime. After all, nobody will defend far-right militias or white supremacist groups using these platforms for their odious goals. However, the same issue with government censorship exists with corporate censorship: If there is a line, who draws it? Will the distinction between mundane politics and extremism be a “I’ll know it when I see it” scenario, as former Supreme Court Justice Potter Stewart described obscenity?

If so, will there be individuals able to unilaterally remove people’s effective ability to use the internet? Could a Facebook employee equate Ben Shapiro with David Duke, and remove his account?

See also  Yet Another Story About America’s Modern Day KGB

According to the libertarian mantra, corporations as private entities can do whatever they like, including banning you from the internet and deplatforming you from the financial system. There are countless people out there who have had their PayPal/bank accounts closed for political speech.

You cannot hold a corporation responsible for its actions, because you have no say in what the overlords are doing to you.

If Wal-Mart et al decides tomorrow that you cannot buy food from their stores, you have no recourse.

PayPal agreeing to turn over all of their users’ information to the ADL marks a turning point, but it’s only the last step of a process that has been obvious since Charlottesville and most recently January 6th, when the narrative was set that anyone who is a Trump supporter/right-winger is basically a white supremacist and a literal Nazi with no Constitutional rights.

In case you forgot, there are hundreds of people in prison, many of them in solitary confinement, tortured by diversity hires while awaiting trial with no bail for a misdemeanor, i.e. trespass on the US Capitol on January 6th.

Moreover, the reality of “private company” libertarian ideology means that we have the same system of censorship in America as exists in Europe, enforced by corporations working with shady NGOs to silence dissent and circumvent the Constitution.