Another “Doomsday Moment” for High-Yield Strategies

Felsenheimer, a high-yield and distressed portfolio manager with XAIA Investments, began by warning that his presentation, “The Devil in Disguise,” would be pessimistic. Then he made a strong case that risk in high-yield markets is as high as it has ever been.
As Felsenheimer sees it, years of excessive liquidity from central banks have completely warped the market, forcing investors to move farther out along the risk curve in search of yield. In his opinion, current market yields do not adequately reflect the actual risks that investors are exposed to.
“We do not live in a world of competitive markets,” Felsenheimer said, pointing to negative interest rates as Exhibit A in his manipulation argument. He explained that money pouring into the high-yield sector, largely via exchange-traded funds (ETFs), was another source of market distortion, contributing to a massive misallocation of capital that sustains unsustainable enterprises.
The growing concentration of high-yield products in the ETF market is particularly worrisome to Felsenheimer. “There are many worthless companies accessing the credit markets,” he said. “I understand these companies have no way to survive. The only reason is the search for yield forces investors to fund them.”
The search for yield has also driven many new investors to the sector who do not understand the risk in the asset class. “I’ve never seen so many investors in high yield who don’t understand high yield,” he said. “The younger generation of traders didn’t experience 2007.”

Yield-Starved Investors Giving In to the Demands of Bond Sellers

Hellman & Friedman LLC and other investors sought last month to borrow money in the bond market to finance a takeover. The U.S. private-equity firm offered a yield of about 3%, but few of the protections once considered routine. Still, the investors bought.
Rampant demand for leveraged loans is allowing private-equity firms to water down legal safeguards for investors. Many lawyers and bankers increasingly worry that such changes could result in higher losses for investors during the next downturn, as creditors find themselves with less protection.
Terms on loans from Hellman & Friedman’s takeover of Denmark’s Nets A/S allowed greater flexibility for the borrower to take on more debt, extract cash from the company and even restrict who owns the loans. That, though, is no longer unusual in the loan market. In the financing of a previous takeover of Nets in 2014, a separate group of private equity borrowers had to prove that debt at the Danish payments company wasn’t rising too quickly. Such a requirement wasn’t present this time.
The move to more borrower-friendly terms has come in both the U.S. and Europe. But the most dramatic shift has been in Europe, where the imbalance between loan supply and demand is most acute.
Investors are clamoring for leveraged loans as years of low interest rates and central banks’ bond buying have pushed down returns elsewhere. Trillions of dollars of sovereign debt, primarily in Europe, continue to sport negative yields, meaning investors pay to lend governments money. With “far too much cash trying to find too few homes,” private-equity firms “can be more aggressive and lenders will take it,” said Adam Freeman, a partner at Linklaters LLP.
Some of the year’s largest leveraged buyouts in Europe have either removed covenants and legal protections, or allowed the borrower to control who buys its debt. That included Bain Capital and Cinven’s takeover of German drugmaker Stada Arzneimittel AG, Lone Star LP’s acquisition of German building materials maker Xella Group, as well as the takeover of Nets A/S.
Analysts say that along with low borrowing costs, the weakening of deal terms has helped boost the appeal of loans to private-equity firms. In Europe, around 88% of the debt funding for leveraged buyouts came from loans this year, according to S&P Global Market Intelligence’s LCD unit, up from 73% in 2015. Meanwhile, 81% of loans in Europe this year have been “covenant-lite,” meaning they lack many standard investor protections, up from 21% in 2013, according to LCD.
Among the first changes was the stripping out of so-called financial-maintenance covenants, which are investors’ main defense against borrowers taking on too much debt. They require quarterly tests of a company’s leverage level, allowing lenders to force the firm into default if it rises too high.
Private-equity firms’ desire to make terms ever more flexible comes as the money they themselves invest in deals has risen around 12 percentage points above where it was before the financial crisis in Europe, according to LCD. That means they have more skin in the game should it go wrong.

U.K regulators forbid CoCos from being sold to mass retail market because they are ‘complex and can be highly risky’
Some big U.S. mutual funds are investing in high-yield securities that overseas regulators warn may not be suitable to retail investors.
The securities at issue are called contingent convertible, or CoCo bonds. A recent Wall Street Journal report said contingent convertible bonds are ending 2017 with near-record low yields, warning that regulators should be vigilant if and when the bonds rally, since the high yields may attract more retail investors.
CoCo bonds, also known as additional Tier 1 notes, are hybrid capital securities with higher yields than better-rated debt from primarily European banks, issued to satisfy regulatory capital requirements. The securities absorb losses prior to, or at the point of, a bank’s insolvency by either converting into common equity or by taking a principal write-down triggered by the regulator or because of the decline of a specific capital ratio.
The British regulator has warned in the past about retail investing in these securities. Non-euro area investors hold €116 billion, or nearly 75% of the total amount outstanding of European CoCos, according to research published in February by Martijn Boermans and Sweder van Wijnbergen of DeNederlandsche Bank . 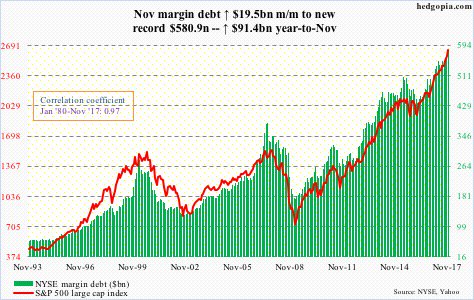 As is usually the case, there is a sudden and desperate scramble for liquidity to window-dress balance sheets and it has sent China 7-day repo-rates (the premium for locking in liquidity across the calendar new year) to 6.00% – the highest since year-end 2013.

Perhaps in response to this apparent crisis, The PBOC has also announced that banks will be allowed to use reserves at the central bank of up to two percentage points to meet liquidity needs during the February lunar new year celebrations.
China’s central bank is allowing temporary reserves use for 30 days to cover any liquidity needs.
Notably, at the same time, overnight Hong Kong Dollar HIBOR rates exploded higher…