For quite some time now, my answer has been: “Yes, but not just yet.”

That’s still what I think today, but more of the early warning signals I have used in the past are beginning to flash again.

I see some leading indicators weakening. I see smart people like Dave Rosenberg argue we may already be in recession today.

And I see Wall Street not really caring either way, so long as it gets enough rate cuts to prop up asset prices. None of that is comforting.

The storm clouds are gathering. Someone is likely to get hit. It might be you.

I think we all agree this recovery cycle has been both longer and weaker than in the past. Any growth is good, of course, and certainly better than the alternative. But the last decade wasn’t a “boom” except in stock and real estate prices.

I like this chart from Lance Roberts, Chief Investment Strategist at RIA, because it shows long-term (5-year) rates of change over a long period (since 1973) in three key indicators: productivity, wage growth, and GDP growth.

You can see all three are now tepid at best compared to their historical averages: 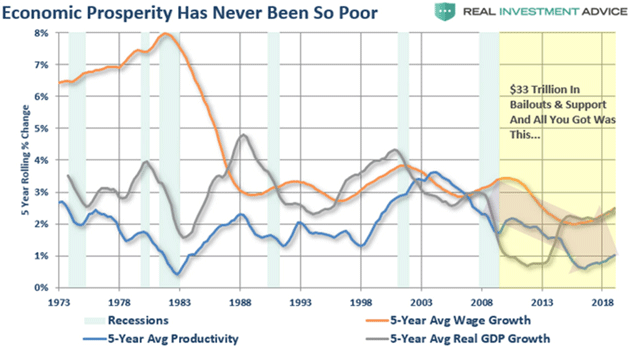 These measures have been generally declining since the early 2000s. It suggests that whatever caused our current problems preceded the financial crisis.

But we don’t need to know the cause in order to see the effects. While not catastrophic (at least yet), they are worrisome. And, as Lance points out, a decade of bailouts and dovish monetary policy didn’t revive previous trends.

The growth deceleration is also visible if we zoom into the recent past, via the Goldman Sachs Current Activity Indicator.

It peaked in early 2018 (not coincidentally, at least in my opinion, about the time Trump started imposing tariffs on China) and slid further this year. 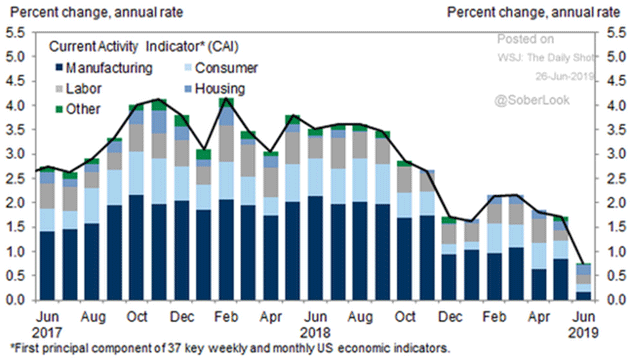 Much of it is due to a manufacturing slowdown, but the consumer and housing segments contributed as well.

Again, this doesn’t say recession is imminent. The US economy is still growing by most measures. But the growth is slowing and, unless something restores it, will eventually become a contraction.

Economies generally move into what he calls a “vulnerable stage” before something pushes them into recession. We all pretty much agree that the US economy, not to mention the global economy, is in a vulnerable stage.

It won’t take much of a shock to push it into recession.

Financial indicators are often somewhat disconnected from the “real” economy.

What’s happening on Main Street, where real people buy and sell real products used in everyday life? The news isn’t reassuring there, either.

The physical goods we buy—food, clothing, furniture, houses, and most everything else—have one thing in common. They (or their components) travel long distances to reach us.

Problems begin when those deliveries slow… and they are.

The Cass Freight Index (which I have followed for more than a decade) measures shipment volume (by quantity, not cost) across the economy: truck, rail, air, ship, everything.

The chart below shows its year-over-year percentage change. 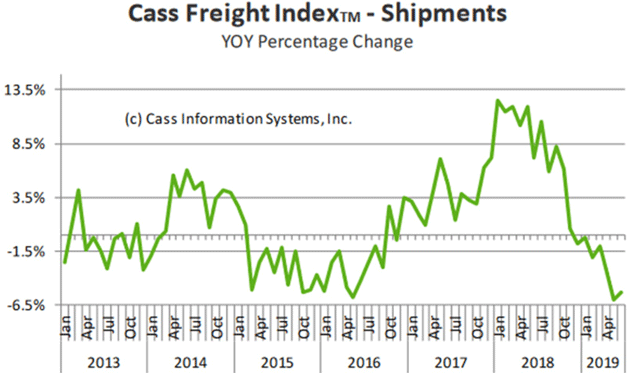 You can see shipment growth picked up in 2016 following an extended weak stretch. This continued into early 2018 then a steep slide ensued.

“What’s the big deal?” you may ask. Look how long that 2014–2016 contraction lasted. It didn’t signal a recession. Two points on that…

First, that retreat sprang from an oil price collapse that began in November 2014 and quickly affected US shale production. This greatly reduced freight volumes.

Second, while it didn’t spark a generalized recession, that particular part of the economy had its very own recession, and it was a nasty one.

The current shipment contraction is potentially far worse. We can’t blame it on a sudden event like OPEC opening the spigots, nor is it focused on a particular sector. The Cass data shows declines everywhere, in everything.

Do I blame this on Trump’s trade war? Partially, yes.

When you start matters, and now is not a good time. You want to buy on weakness, not strength. The weakness will come, but this isn’t it.

There is a counterargument, though. Maybe all this history doesn’t matter when we have central banks doing absurd things like negative interest rates. I see real risk that the Fed will go to NIRP before all this ends.

Imagine what that will do to the trillions presently stashed in bonds. Will people (not to mention pension funds) happily pay for the privilege of being owed money? If not, where will they put their cash?

The answer, for many, may be in stocks. The resulting money flow could keep equity prices high despite negative fundamentals. I’m not predicting that outcome, but it’s possible.

We are in such bizarre times, all bets are off. It is certainly not the time for “buy and hold” unless your goal is to lose everything. If not, then you need an active, flexible, defensive investment strategy now more than ever.