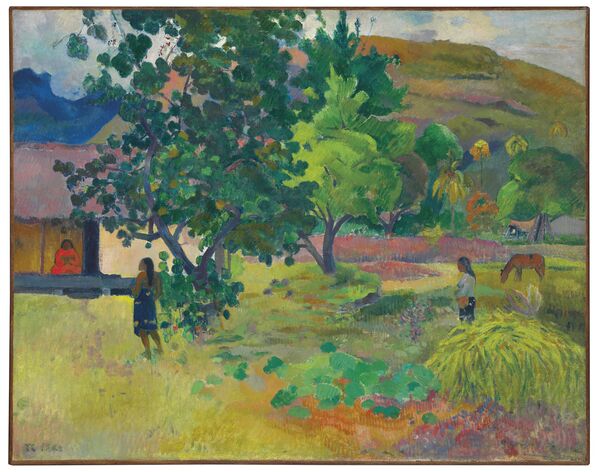 Te Fare by Paul Gauguin – Source: Christie’s
Russian billionaire Dmitry Rybolovlev paid €54 million or $85 million for a landscape by Paul Gauguin in a private transaction in June 2008. Yesterday, he incurred a whopping 74% loss on his store of value “investment” as reported by Bloomberg:
Gauguin’s 1892 landscape “Te Fare (La Maison)” fetched 20.3 million pounds ($25 million), including commission, at Tuesday evening’s sale of Impressionist and modern art at Christie’s in London. Rybolovlev will net about $22 million based on the hammer price. The auction house had estimated the value at $15 million to $22.4 million. The buyer was a client of Rebecca Wei, president of Christie’s Asia.
The Gauguin was one of four Rybolovlev pieces offered for sale on Tuesday. Another work, a Mark Rothko painting, will be auctioned March 7.
Rybolovlev — with a fortune of about $9.8 billion according to the Bloomberg Billionaires Index — invested about $2 billion in 38 works, from Leonardo da Vinci to Pablo Picasso. They were procured privately by Swiss art dealer Yves Bouvier, known for creating a network of tax-free art storage warehouses in Singapore and Luxembourg.
Two years ago, Rybolovlev sued Bouvier, alleging he was overcharged by as much as $1 billion, Bloomberg reported. Since then the Russian fertilizer magnate has been unloading works he acquired, some at record prices. He has already sold three for a loss totaling an estimated $100 million. The five works at Christie’s, all estimated below their purchase prices, were expected to deepen the loss.
The art industry is closely watching the London auctions running this week and next as the year’s first test of the global market following a significant contraction in 2016. Christie’s sales fell 17 percent to $4 billion pounds ($5.4 billion) last year, while Sotheby’s reported a 27 percent decline to $4.9 billion. Both houses saw steep declines in their two biggest categories: Impressionist and modern art, and postwar and contemporary art.
In May 2015, we warned about the bubble in the the fine art “investment market or indeed the Hyperinflation in Art Investment Market after a Picasso sold for $179 million. William Banzai
At the time, we pointed out that ultra high net worth and family office buyers may be viewing the fine art market as a form of super safety deposit box and as a way to protect their wealth from market crashes, systemic risk and the risk of bail-ins and deposit confiscation today.
Since then global art sales plunged in 2016 as the number of high-value works of art sold dropped by half, while China regained its status as the world’s top market according to an annual report recently released by Artprice. Art auctions worldwide totalled $12.5 billion (11.8 billion euros) last year, down 22 percent from $16.1 billion in 2015, the report said.
The world’s biggest database for art prices and sales, working with Chinese partner Artron, attributed the drop to a plunge in the number of works worth more than $10 million each – from 160 in 2015 to just 80 last year. “On all continents, sellers are choosing a policy of ‘wait-and-see,’” Artprice CEO Thierry Ehrmann said.
In recent years, very wealthy art buyers may have believed art was less risky than holding increasingly debased digital currencies in banks that may be subject to deposit bail-ins.
As a diversification, art has some merit as it is not correlated with financial assets, but only as a very small part of an overall portfolio.
Given the scale of risks facing investors and savers today we are advising clients to increase allocations to gold from the standard 5% to 10% allocation to higher allocations of as much as 25% to 30%.
Most investors and savers cannot afford a Picasso or a Gauguin but the proven, timeless store of value that is physical gold remains accessible. Gold in USD Adjusted for Inflation 1970-2017 – Macrotrends.net
Not only is it accessible but it remains relatively cheap from a long term perspective, at nearly less than half its real price high of $2,200 price in 1980 when adjusted for the considerable inflation of the last 37 years.
Gold is also relatively cheap compared to most stock, bond and property markets, many of which are at all time record highs. These highs are in large part due to quantitative easing (QE), zero and negative percent interest rates and global currency debasement on a scale never seen in history.
Access Breaking News and Research Here
Gold and Silver Bullion – News and Commentary
Gold down on hawkish comments by Fed officials, dollar pressure (Reuters)
U.S. Mint gold coin sales at 14-month low in February (Reuters)
Number of distressed U.S. retailers at highest level since Great Recession (Marketwatch)
Showdown in Indonesia brings world’s biggest gold mine to standstill (CNBC)
Online channels shine with gold-backed financial products (China.org)

749 views
READ  What The Boom In Fraud Says About The Current Market Environment
READ  The equity put-call ratio had fallen to a multi-year low recently. Is the market getting too complacent?