Avenatti is using his Twitter account to allow others to see this information, and it is powerful.  I pray for the Kavanaugh family during this time of turmoil. I, also, pray for all the women in this world, who have endured sexual assault.

Here is a picture of my client Julie Swetnick. She is courageous, brave and honest. We ask that her privacy and that of her family be respected. pic.twitter.com/auuSeHm5s0

Avenatti’s new client Julie Swetnick, has well established credentials. She worked for the U.S. Mint, State Department and Justice Department. She is the latest woman — the third — to accuse Brett Kavanaugh of sexual misbehavior.

Her words recorded allegedly about Brett Kavanaugh are shocking to the emotional system of any woman.  An immediate reaction is horror, and a monster suddenly appears in your mind. Avenatti posted a statement signed by her expressing her thoughts and what she said she could testify to under oath..

Here is a picture of my client Julie Swetnick. She is courageous, brave and honest. We ask that her privacy and that of her family be respected. pic.twitter.com/auuSeHm5s0

The following  screenshot is an update of the affidavit from ‘The Daily Caller.’

Now, I want to move on to an analysis of what is in the affidavit, how it was phrased, and what was left out.  If you are serious about the law, the following website is the place to go.

What Swetnick does not say is as important as what she says.  This will continue after the affidavit below. 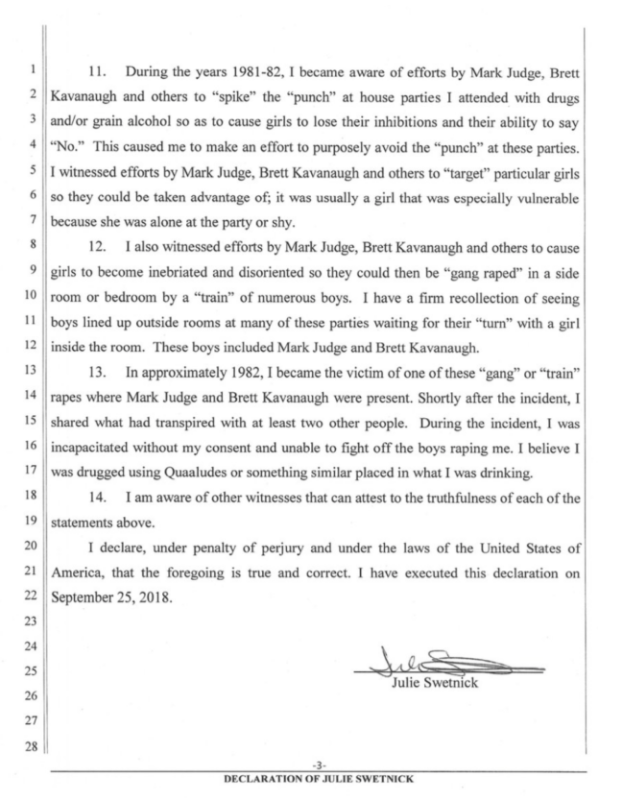 What does she not say that she has to say to legitimize her affidavit?

Swetnick’s allegations can easily be viewed as supporting the allegations made by Ford and Deborah Ramirez, and going against Kavanaugh’s own claims of innocence in his youth. Other statements from people who went to college and law school with Kavanaugh said these allegations do not match the person they know at all.

All things considered, Swetnick’s statement probably won’t sway too many people. Those who already believe the other allegations against Kavanaugh may have their beliefs bolstered by this. Those who doubt Ford and Ramirez will surely notice the holes in Swetnick’s story.

As for those who don’t know what to believe, this latest statement both includes and omits enough details that it probably won’t push anyone firmly into one camp or another. Many questions remain. Kavanaugh will have a chance to answer them Thursday before the Senate Judiciary Committee.

STATEMENT FROM LAW AND CRIME –

This is an opinion piece. The views expressed in this article are those of just the author. END OF QUOTE