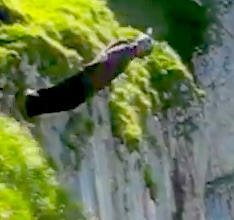 According to Bank of America, there is no time to leap into the stock market like the moment before its cataclysmic fall. BofA’s Michael Hartnett has no doubt that the stock market stands on the edge of catastrophic collapse, but the euphoric rise before it takes the plunge could be the greatest financial rush you’ll ever know:

As Hartnett explains, the catalyst for bull in equity and credit markets since 2009 was the “revolutionary monetary policy of central banks” who, since Lehman, “have cut rates 679 times and bought $14.2tn of financial assets.” And, once again, he warns that this central bank “liquidity supernova” is coming to an end, as is “the period of excess returns in equities and corporate bonds, as is the period of suppressed volatility.” (Zero Hedge)

The tail-end risk of this trade

What happens to the Fed’s economic recovery when the Fed ends its money boom just as irrational exuberance in the stock market is retreating? Unless Trump pulls a magic rabbit out of his hat that looks far better than his “great” health-care plan, the Trump Rally will quickly turn this year into the Trump Dump.
Consider what the Trump Dump could turn into: The Fed plans 3-4 rate increases into the unwind of the irrational Trump Rally. It also hinted this week at money-supply reduction. This unwind of Fed and folly will fall into an economy where earnings are far from justifying inflated stock prices, where jobs pay about the same as they did thirty years ago (adjusted for inflation) and where benefits are far below what they were thirty years ago, while the peak of retiring baby boomers dives into a pool retirement funds that have evaporated out from under them because of the Fed’s decade of near-zero interest. (That just names a few of the hazards that lie ahead on this trajectory.)
What could possibly go wrong?

Harnett writes that “risk markets continue to climb a wall of worry, defying bearish structural trends in the financial industry….” Demonstrating how insane just the past year has been in markets, Hartnett reminds us that just eight months ago belief in debt deflation & secular stagnation induced lowest interest rates in 5000 years! 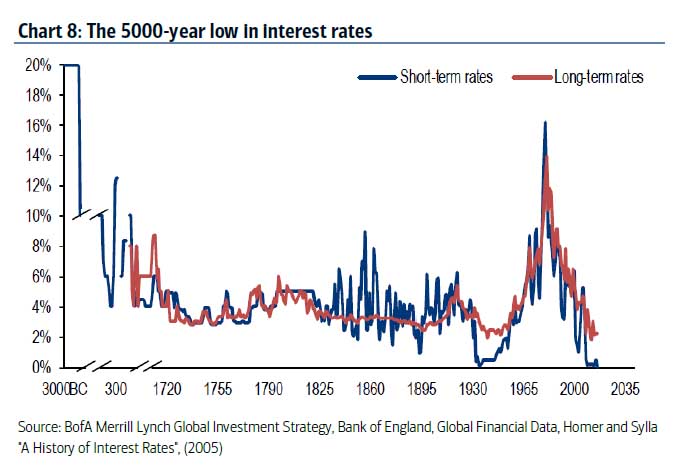 Hartnett believes the market will supernova before it collapses into itself as we exit the Fed’s masterplan of economic re-inflation. He thinks the blow-up of the Fed’s hyper-expansion will sail us through the first half of this year. He could be right. I’ve been saying it will take about that long before everything collapses, too. However, Hartness also believes this supernova is the prime time to trade because the top will blow off the market, and you can ride that explosion.
We’ve gone from “buy the dip” to “buy the blow-off.”
I, on the other hand, am more the type who is afraid I won’t get out before everyone else falls on top of me. No one has ever seen anything like the coming collapse, or “the Great Unwind,” in action. So, how can you be sure you’re timing your exit right? It’s hard even to time the right moment to exit before a normal market correction. So, I’m already fully out. (Staying in, if you are aware of the size of the coming collapse, is a question of whether you thrive on high-risk/high-reward.)
Even Hartnett says,

We believe we are closer to the highs than lows in risk markets. But tops are a process; lows are a moment.

Indeed, we are now at a point near the Great Unwind where you are timing the moment if you intend to experience the maximum rush. Those who try to time the moment are often wiped out in a moment, too.

Hartnett warns that what follows the final, Q2 “Icarus” rally will be far less enjoyable, because that’s when the infamous “great fall” is set to take place. “Great Fall” potentially comes in H2 as hubris, synchronized monetary tightening, EPS peak coincide; buy long-dated puts in anticipation; we believe best time to sell would likely be after a pop induced by a US tax reform bill (March Fund Managers Survey showed only 10% of institutions expect US tax reform passed before summer recess).

It’s an “Icarus Rally” all right — flying exuberantly into the sun until your wings melt off. Right after the final pop from the promised tax reform would certainly be the best time to sell in order to reap the highest rewards; but that “certainly” contains a big if because it is predicated on tax reform going as promised. If it does, there will be one more boom before the Big Bust.
However, that means tax reform has to go far better than healthcare reform went. Since President Trump was certain healthcare reform would be a quick slam-dunk until he got his first learning experience with congress, can we be certain that tax reform, already somewhat priced into the market as the Trump Rally, is coming — especially since most of it will require Democrat support?
What happens if you’re holding stock, waiting for tax reform to push prices for one last romp and then the tax push does the Healthcare Crush? The “Great Fall” or “Great Unwind” I am certain of; the final tax push I am not, though I’m not saying it won’t happen.
Even BofA’s Hartnett says the risk that follows will be hideous:

Our Longest Pictures argue for a treacherous period of potential manias, panics or crashes as policy makers try to normalize policy.

“Manias, panics and crashes” is how he describes the end of 2017. So, that’s what you are investing into if you’re still in stocks. You can aim for the fantasized run-up that precedes all that and try to time your parachute for the last second, and have the ride of your life. There are also people who jump from mountains wearing flying-squirrel suits, but there is not a lot of margin for error:

READ  HOUSING MARKET BLACK PILL: Or why housing prices will continue to rise until the complete collapse of the system.
READ  Understanding The Market Requires You To Understand Market Psychology

Try it if you want to. Some people love that kind of “extremely close” thrill ride.


What could possibly go wrong with this investment strategy?


As one failed cliff-leaper said, “There’s a euphoric feeling as you start to die.” Take the ride if you want, but bear in mind that the guy in the first video — rated one of the world’s best base-jumpers — died at his sport: (If you can’t watch the videos, you’re probably not made for staying in this year’s stock market either.)


Enjoy the euphoria while it lasts, I guess. Cliff jumping is the deadliest sport in the world. Investing for the final rush in this market could prove to be the same. (It doesn’t always go as planned, but what a thrill if you make it, huh?)

Jump into the market (or stay in) at your own risk.  Some people thrive on risk, but “this time is different” doesn’t always mean this time will be good. Without a doubt, though, it will be different, and it will be thrilling. Just think of what you might miss if you don’t take the plunge:


Well, that was fun.