The Amazon.com Inc. founder added $12 billion to his fortune as the company’s shares surged 6.3 percent to $1,614 in extended trading at 4:33 p.m. in New York — on top of a 4 percent gain during the regular session — after the retailer reported results that beat Wall Street estimates. That lifted Bezos’s net worth to to $134 billion, according to the Bloomberg Billionaires Index. 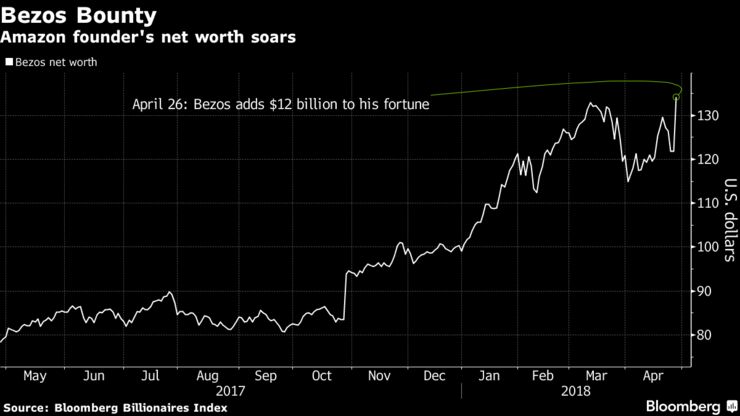 Amazon reported a huge beat across the board for its first-quarter earnings on Thursday, with particular growth coming from its AWS cloud service and advertising business.

Amazon stock is up roughly 7 percent in after-hours trading, soaring past its all-time high.

Here are the most important numbers:

Amazon will increase the annual cost of Prime for U.S. customers to $119 per year, up 20% from $99 currently — news coming after it blew the doors off revenue and profit expectations in the first quarter.

The price increase will take effect starting June 16 for existing Prime customers based on their renewal period, CFO Brian Olsavsky said on Amazon’s first-quarter 2018 earnings call. New members will pay the $119 price starting May 11. The company last raised the price of Prime in the U.S. in March 2014.

Asked on the call why Amazon was raising rates now, Olsavsky cited rising costs because of higher shipping expenses and spending on digital content. “It’s really nothing more than looking at the state of the program, and the high benefits it’s delivering,” he said. “There’s all kinds of new features we’ve continually added to the Prime program. It’s much different than it was in 2014.”