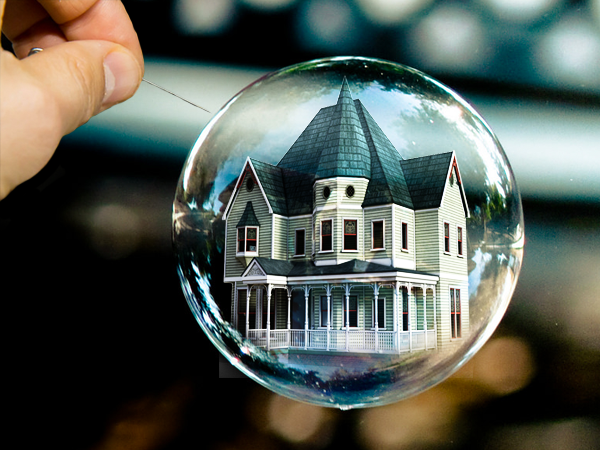 The U.S. has enough bumps on the road with mortgages following a similar script to 2008, the unwinding of QE, and the slowly rising “Goldilocks Economy” that’s about to have a hangover.

Well strap in, because housing sales in key markets are all signaling the imminent deflation of a massive housing bubble. And the dangerous thing about this kind of bubble popping is that the effects can last for decades.

The U.S. just went through a long period of low interest rates that fueled demand for housing and inflated housing prices.

But that ride is over. Now we watch as mortgage rates rise to levels not seen since the 2008-09 recession.

And this time is dangerously different than a decade ago. Paul Kupiec from the Wall Street Journal highlights the history:

During the last crisis, easy credit led home prices to rise at an unsustainable pace, leading marginally qualified borrowers to stretch themselves thin. Millions of Americans’ dreams became nightmares when the housing market turned. The lax underwriting terms that helped borrowers qualify for a mortgage haunted many households for the next decade.

Take Southern California for instance. CNBC reports the rather dramatic year-over-year increase of 7.3% in the median home price, now $536,250.

Big ticket home sales of $1 million or more are in stagnation, and overall house and condo sales fell 11.8% last month as prices soared.

A Corelogic report detailed by CNBC spells it out:

Southern California home sales hit the brakes in June, falling to the lowest reading for the month in four years. Sales of both new and existing houses and condominiums dropped 11.8 percent year over year, as prices shot up to a record high, according to CoreLogic. The report covers Los Angeles, Riverside, San Diego, Ventura, San Bernardino and Orange counties.

Naturally, if home sales continue to decline at this pace, median prices will fall dramatically. And similar patterns are happening elsewhere.

READ  Have Stocks Already Priced In The “Economic Boom?”

What Started in Southern California is Spreading Like a Virus

In the Seattle, Washington area, a rapidly inflating housing market may be getting set to crash, according to Jerry Martin, President of Washington Realtors from another CNBC report:

The demand for housing has hit nearly every sector — rental apartments, condominiums, as well as single-family homes. Seattle workers are being forced to look farther and farther from the city to find a place to live.

An even bigger question is how the boom will end. Will it be a soft landing? Or is Washington setting itself up for a crash?

That keeps home prices rising, and in Seattle they are up 13 percent over last year.

But Martin displayed concern about U.S. trade tariffs and rising rates as factors that could “pop” the Seattle housing market when combined with the rapidly rising prices:

“If jobs are lost based on tariffs, or if we have these trade wars going back and forth, people are going to be skittish, because they don’t know if they’re going to have a job tomorrow,” he said.

Also a concern: interest rates, which are on the rise as the economy heats up. A 30-year fixed-rate mortgage in Washington averaged 4.4 percent last week, according to Bankrate.com. They were under 4 percent a year ago.

Higher rates make homes even less affordable than they are now, and that could price some buyers out of the market.

So Seattle might be in a “sweet spot” now, but they seem to be straining to keep it. And this housing bubble inflation isn’t limited to the West Coast…

According to CoreLogic, nearly half of the top 50 markets across the country are overvalued. Frank Martell, President and CEO, anticipates trouble in 2019:

“While demand and home price growth is in a sweet spot, a third of metropolitan markets are overvalued and this will become more of an issue if prices continue to rise next year as we anticipate.“

Those are all pins, and once the demand drops as people are pushed out of these major markets, the next sound you’ll hear is “Pop!”

Make Sure Your Portfolio isn’t a “House of Cards”

These are interesting times indeed. As the market correction continues into 2019 we will see just how inflated this housing market is.

Until then, you can get started by hedging your bets. Precious metals can help. Start protecting your savings now, and make sure your portfolio is in a solid position.