The market correction in late December notwithstanding, 2017 was the year of bitcoin. The cryptocurrency made headlines both for its eyepopping returns and its highly speculativenature. Jamie Dimon, the CEO of JP Morgan Chase, famously said bitcoin was a “fraud,” and that people who buy it are “stupid.” Regardless of what you think about it, bitcoin’s inexorable rise got us wondering how it compares against the fastest growing publicly traded companies. So we ran the numbers and created a new graph to find out. 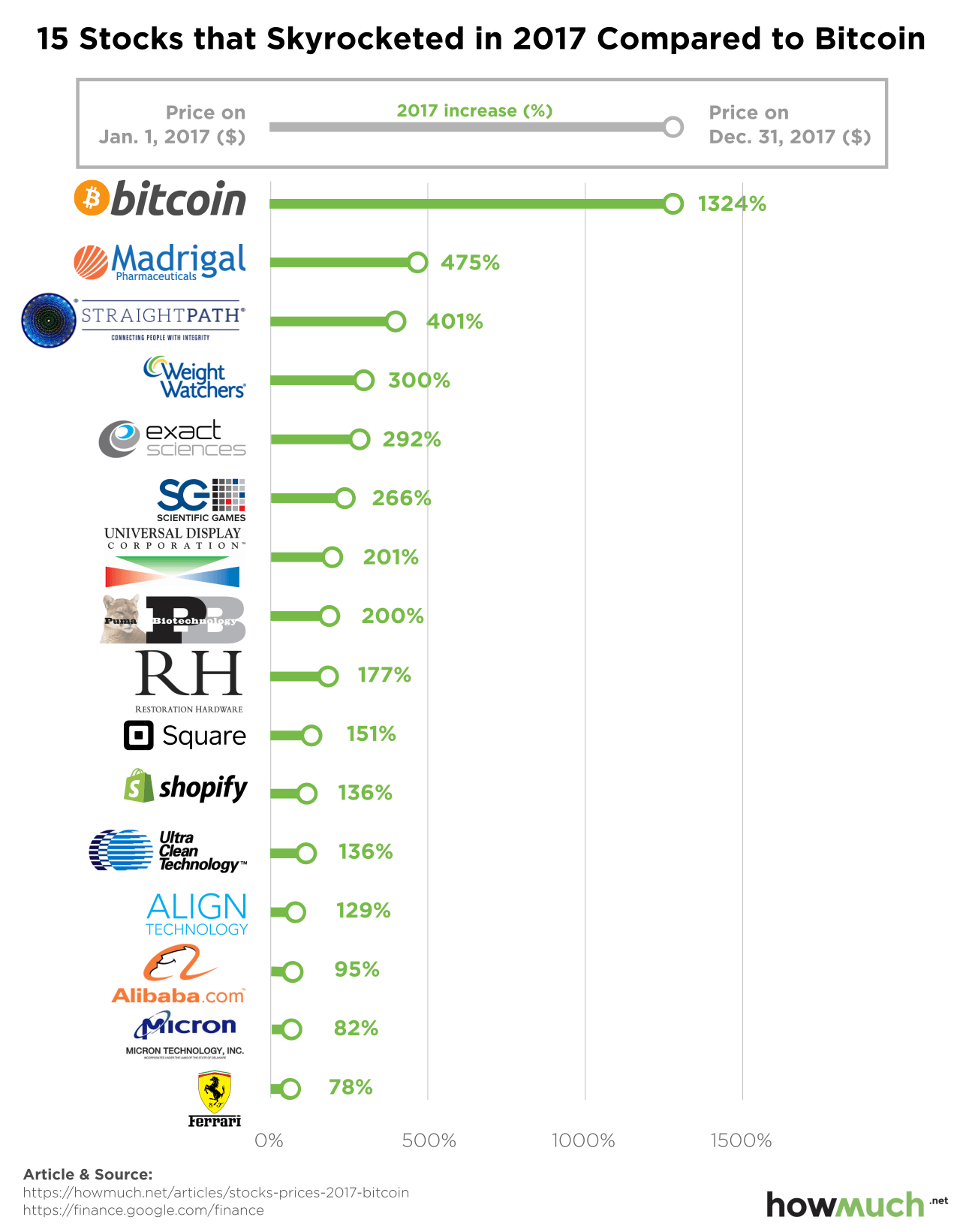 To get our numbers, we simply searched Google Finance for the top companies in terms of percentage growth year-to-date. We ranked each company (or cryptocurrency) from highest to lowest, placing each logo on a straightforward bar chart. This lets you see how the prices of different stocks behaved throughout the year, putting them on an even playing field with Bitcoin. This lets you easily see how Bitcoin’s performance stacks up against other high-growth companies.

As you can clearly see, Bitcoin investors by far saw the most growth in 2017, totaling an amazing 1,324%. That’s insane by any measure, especially when you compare it against other high-growth stocks. The second-highest performing stock was Madrigal Pharmaceuticals at an impressive 475%, but that’s only about a third as much as the rise of Bitcoin. Never heard of Madrigal? It’s a low-key drug company that recently discovereda promising treatment for liver disease. That’s right: Madrigal might have cured liver disease—which afflicts almost 4 million people—and the company didn’t even match half of Bitcoin’s rise in value.

The other company on our list boasting more than 401% growth is Straight Path Communications, which specializes in millimeter bandwidth licenses for 5G networks. 5G represents the next level of mobile network connectivity—imagine streaming Netflix directly on your phone, outside of WiFi coverage, with minimal lag. The Pew Research Center estimates that roughly 3 out of 4 Americans have a smartphone, a trend which is probably only going to increase. It makes a lot of sense that a company like Straight Path would skyrocket in value.

Things start to get crowded further down the list. Weight Watchers had a great year, posting 300% growth, followed by Exact Science (292%) and Scientific Games (266%). In fact, there are actually a lot of technology companies among the top-performers from 2017. Square (151%) and Shopify (136%) are obvious standouts, but take another look at Alibaba at 95% growth. Alibaba is a massive e-commerce and retail conglomerate in Asia. Think of it as the Amazon of China, only better. Alibaba was already a huge company, and now its market cap sits at $470B. For the sake of comparison, Bitcoin’s market cap is only$253B. No other company comes anywhere close to Alibaba.

See also  Stocks Bounce Off The Lows. Time To Buy?

No matter how you slice it, the rapid rise of Bitcoin blew away the competition in 2017. There’s no telling where the currency will be at the end of 2018, much less any of the other companies on our list. That being said, we will let you decide whether or not to invest in cryptocurrency.