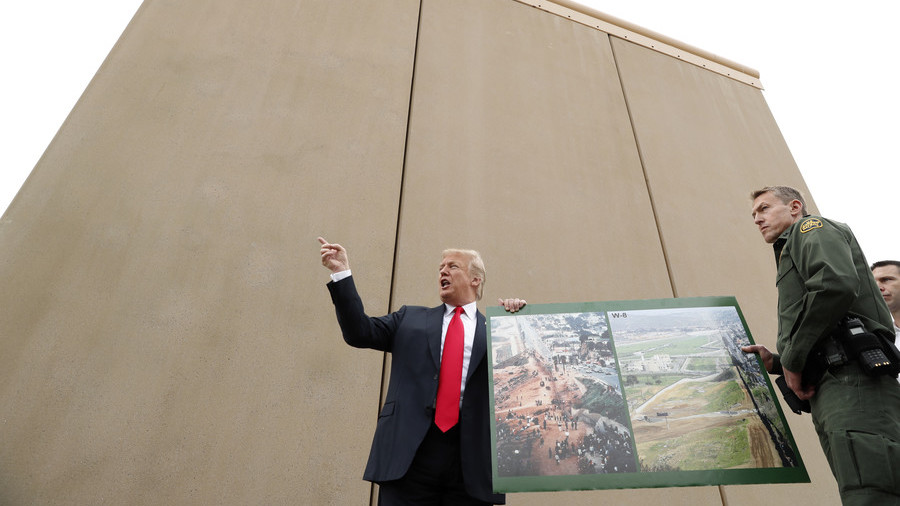 Life is not without a sense of irony, as we just got word about an illegal alien who broke both of his legs as he was trying to enter the land of the free, home of the brave by jumping over a brand-new (and beautiful) thirty foot high wall. Who said that border walls don’t work?

This unpleasant yet symbolic incident took place in the Golden sanctuary State of California on Sunday night, east of San Diego. The Border Patrol caught the incident on video, which shows the perpetrator laying on the ground after jumping over the bollard style border fence in downtown Calexico.

The Border Patrol released an official statement via spokesman Carlos Pitones, who told the press that usually speaking, the Federal Government takes care of the medical expenses for the people injured while crossing the border illegally. No, they don’t. The American taxpayer pays those expenses.

The good news is that illegals are deported back to their country of origin immediately after recovery. Why not immediately? Cast him, patch him up and toss him back to Mexico.

The US government is currently replacing a 2 mile portion of border barrier built from landing mat and recycled metal scraps with the new bollard-styled wall.

Here’s the low-res video with the incident (these guys from Border Patrol definitely need modern gear):

Has he filed a lawsuit yet? Where’s the ACLU? Remember how the failing NYT keeps claiming that border walls don’t work and they’re a waste of money? The same type of fake news is parroted by the LA Times. Now, if you ask me, if a big beautiful border wall is good for defending Israel, than it’s certainly good enough for us too. And it also pays itself, via less illegal aliens entering our welfare paradise, less drug trafficking and so on and so forth.

The best way to finance the full border wall is to make it part of the military budget. After getting approval, allow the C-BEES to start and finish construction. It they run into any Bolshevik-sparked trouble, remember they are also armed, besides being excellent builders who could probably finish the entire wall in under a year. Also remember that the US government has TOTAL jurisdiction 200 miles inland on the border, hence Brown and his ilk could not stop it, even if they went to court.

Moreover, studies have shown that 38 ft is typically a terminal height, and this guy missed it by that much. Let’s redesign the border wall to 40 ft and allow the Darwin effect take its course. Simple applied physics.

Most people who jump from the border wall get broken legs. Since they are injured on the U.S. side, they are taken to the nearest U.S. trauma center, in the custody of Border Patrol. All those picked up in the desert with any medical needs come to U.S. hospitals with B.P. The American taxpayers pick up the bills anyway.

See also  California's Port of Oakland shuts for a THIRD day in a row due to trucker protest : Supply chain crisis set to WORSEN

I’m not suggesting that we lower ourselves to their level, but here’s how Mexico handles expenses for injuries:

“ The father of a man involved in a fatal car crash in Baja California over the weekend criticized Mexican authorities Monday for holding two injured passengers on high bail amounts before releasing them.  Lewand and others also criticized a Mexican legal system that, they say, puts the lives of tourists at risk by emphasizing the demand for bail above the need for medical care after an accident. Mexican law requires foreigners to post bond before they can leave the country if they are under investigation in a traffic accident that is considered potentially criminal.”