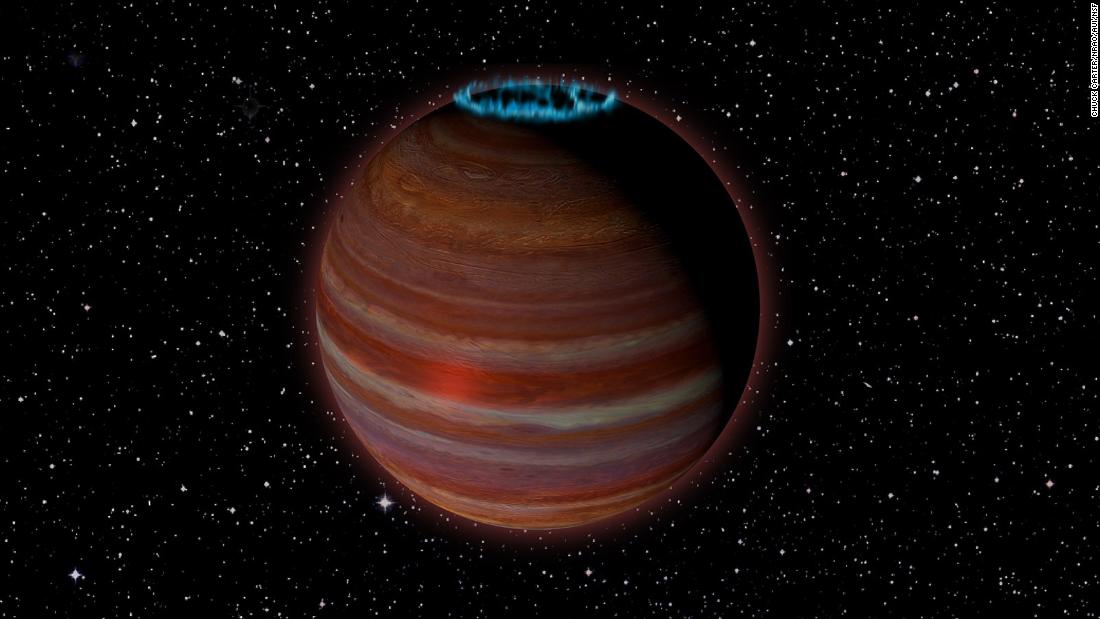 A planet more than 12 times bigger than Jupiter has been found drifting alone through space around 20 light years away from Earth.

The rogue planet is not attached to any star, and is the first object of its kind to be discovered using a radio telescope.

Both its mass and the enormous strength of its magnetic field challenge what scientists know about the variety of astronomical objects found in the depths of space.

“This object is right at the boundary between a planet and a brown dwarf, or ‘failed star’, and is giving us some surprises that can potentially help us understand magnetic processes on both stars and planets,” said Dr Melodie Kao, an astronomer at Arizona State University.

It’s not attached to any star and is 12 times the size of Jupiter, which has a radius of more than 69,000 kilometres.

The massive planet is the first object of its kind to be discovered using a radio telescope.

The discovery is challenging what scientists know about the variety of astronomical objects found in the depths of space.

“This object is right at the boundary between a planet and a brown dwarf, or ‘failed star’, and is giving us some surprises,” Dr Melodie Kao and astronomer at Arizona State University told The Independent.

“They [the surprises] can potentially help us understand magnetic processes on both stars and planets.”

Finding a solitary planet — called a “rogue” planet — is more difficult, but researchers just managed to spot one using a radio telescope, and it’s a real weirdo.

The planet is known as… *inhales* …SIMP J01365663+0933473. It’s an absolutely massive alien world that is nearly big enough to be classified as a brown dwarf. Brown dwarf planets are sometimes called “failed stars” because they’re nearly large enough for fusion to begin taking place in their core, but that’s not even the most unique thing about this particular planet.

What’s really special about that planet with the big long name is that it has a magnetic field 200 times stronger than even the mighty Jupiter. That’s an incredible finding, and it suggests that there’s some very interesting things going on above the planet’s surface. One of those things is a strong aurora, often called “Northern Lights” here on Earth.

Auroras on Earth are created when charged particles from the Sun interact with Earth’s magnetic field. This newfound world has no star in the neighborhood, and researchers still aren’t sure how planets like this are able to seemingly create their own auroras.

Another cool discover about this huge planet is that it’s just a baby. It’s thought to be only around 200 million years old, which makes it an infant in planetary terms, and its surface is boiling hot. If you were to stand on it (not a good idea) you’d be subjected to temperatures in excess of 1,500 degrees Fahrenheit. You’d have a bad time.

A HUGE “rogue” planet with an unexplained “glow” lurks beyond our solar system, scientists have claimed.

The mysterious world is 12 times larger than the gas giant Jupiter and is the first object of its kind to be discovered using a radio telescope, according to the National Radio Astronomy Observatory.

The observatory is dubbing the planet a “rogue” because it is independently “drifting” through space without any kind of orbit around a parent star, The Sun reports.

is its large mass and powerful magnetic field which is over 200 times stronger than Jupiter’s.

Picking apart its secrets could lead to the discovery of more alien worlds, the research team claimed.

“This object is right at the boundary between a planet and a brown dwarf, or ‘failed star’ and is giving us some surprises that can potentially help us understand magnetic processes on both stars and planets,” Arizona State University astronomer Dr Melodie Kao said.

The object, about a dozen times more massive than Jupiter, is a surprisingly strong magnetic powerhouse and a “rogue,” traveling through space unaccompanied by any parent star.

“This object is right at the boundary between a planet and a brown dwarf , or ‘failed star,’ and is giving us some surprises that can potentially help us understand magnetic processes on both stars and planets,” said Melodie Kao, who led this study while a graduate student at Caltech, and is now a Hubble Postdoctoral Fellow at Arizona State University.

Brown dwarfs are objects too massive to be considered planets, yet not massive enough to sustain nuclear fusion of hydrogen in their cores — the process that powers stars. Theorists suggested in the 1960s that such objects would exist, but the first one was not discovered until 1995. They originally were thought to not emit radio waves, but in 2001 a VLA discovery of radio flaring in one revealed strong magnetic activity.

Subsequent observations showed that some brown dwarfs have strong auroras, similar to those seen in our own Solar System’s giant planets. The auroras seen on Earth are caused by our planet’s magnetic field interacting with the solar wind. However, solitary brown dwarfs do not have a solar wind from a nearby star to interact with.

How the auroras are caused in brown dwarfs is unclear, but the scientists think one possibility is an orbiting planet or moon interacting with the brown dwarf’s magnetic field, such as what happens between Jupiter and its moon Io.

The strange object in the latest study, called SIMP J01365663+0933473, has a magnetic field more than 200 times stronger than Jupiter’s. The object was originally detected in 2016 as one of five brown dwarfs the scientists studied with the VLA to gain new knowledge about magnetic fields and the mechanisms by which some of the coolest such objects can produce strong radio emission. Brown dwarf masses are notoriously difficult to measure, and at the time, the object was thought to be an old and much more massive brown dwarf.

So what exactly is this rogue object?

A study published this month in the Astrophysical Journal Supplement Series includes details from the detection.

This is the first radio-telescope detection and first measurement of the magnetic field of such an object beyond our solar system. Astronomers found it using the National Science Foundation’s Karl G. Jansky Very Large Array radio astronomy observatory in New Mexico.

The surprising find is peculiar because it could be a planet or a brown dwarf.

Brown dwarfs are often considered too massive to be planets, but they aren’t quite massive enough to sustain the process of hydrogen nuclear fusion at their core, which powers stars. The first brown dwarf was discovered in 1995, although they were first theorized in the 1960s.

Twenty light-years away, a massive, magnetic exoplanet without a sun is generating brilliant auroras that would put Earth’s northern lights to shame.

According to a recent study in The Astrophysical Journal, the rogue planet has a magnetic field almost 4 million times stronger than Earth’s and a mass 12.7 times the size of Jupiter. The discovery marks the first time radio observations and magnetic field measurements have been made of such a body and opens the door for future insights into exploring exoplanetary magnetic fields.