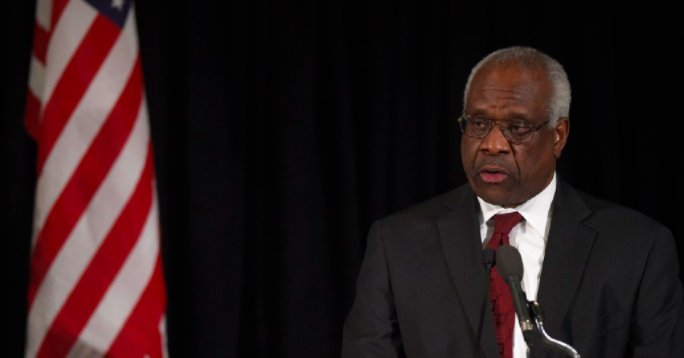 Thomas went on to note that the appeals court’s “deviation from ordinary principles of law is unfortunate, though not surprising,” and said he has observed a trend among the lower courts to resist the Supreme Court’s decision in the cases Heller v. District of Columbia and McDonald v. City of Chicago.
The justice said that in resisting the high court’s decisions in each of those cases, the lower courts are “failing to protect the Second Amendment to the same extent that they protect other constitutional rights.”
“In the Ninth Circuit, it seems, rights that have no basis in the Constitution receive greater protection than the Second Amendment, which is enumerated in our text,” Thomas wrote.
www.washingtonexaminer.com/clarence-thomas-rips-high-courts-decision-not-to-hear-case-challenging-california-gun-law-second-amendment-is-disfavored-right/article/2649503
Almost on a daily basis, we hear stories of why men should have the right to use the women’s bathroom and vice versa. Where is this written in the constitution? How many rapes/molestation/murder will happen over this? We’re supposed to ignore the risk to our children because people have rights you know.
We are told that women have the “right” to kill their unborn child. Teenagers supposedly have the “right” to murder their baby without even telling their parents. Even illegal aliens supposedly have the “right” to an abortion. Where is this right written in the constitution?How many children are murdered by abortion on a daily basis? Is it more than 17?
Today there was a story of a teenager who was taken away from her parents because they would not support her in her gender transition: www.washingtontimes.com/news/2018/feb/20/religious-parents-lose-custody-transgender-teen/ So teenagers have the “right” to decide to change their gender, and when the parents disagree, the government can remove them from your care. Where is the right to change your gender in the constitution? Who gave the government the right to take your children for such a reason?
But yet, we are told that we must negotiate with our 2nd amendment rights. Many people want to take that right away completely. Some want to impose new age restrictions. A little here, a little there:
“Passing a law that makes it illegal for a 20-year-old to purchase a shotgun for hunting or adult single mother from purchasing the most effective self-defense rifle on the market punishes law-abiding citizens for the evil acts of criminals,” she added.
Any law that requires an individual to be 21 or older to buy a firearm “effectively prohibits” adults aged 18-20 from buying a firearm, Baker said, “thus depriving them of their constitutional right to self-protection.”
The NRA comments come in the wake of a new push for legislation to curb gun violence after 17 people were killed last week at a high school in Parkland, Fla.
thehill.com/regulation/administration/374981-nra-opposes-new-age-limits-on-gun-purchases
So an 18 year old man can be drafted for war against his will, but he won’t be able to purchase a gun or buy a drink?
An 18 year old woman can choose to murder her unborn child, but she can’t purchase a gun for self protection?
Despite what many seem to think, there are still 18 year olds left in this country that have let go of their mama’s apron strings. They are told to leave the home and make their own way in the world. Their parents don’t have a basement for them to live in, nor do they have the funds for the “college experience.” They go out and get a job, some start a family (planned or unplanned). Some seem to think these adults should be denied their right to protect themselves against their own government and common criminals. People find all kind of creative ways to justify it, but the words “shall not be infringed” are pretty self explanatory. Not sure what in the hell has happened in this country, but people seem to have lost their minds.

Some like to say that this country’s founders could never have known what type of firearms would be available in the future. Surely the words “shall not be infringed” weren’t meant to cover something like an AR-15?
But they will twist the words “life, liberty, and the pursuit of happiness” to justify this perversion:
“It is unfortunate that this case required resolution by the Court as the family would have been best served if this could have been settled within the family after all parties had ample exposure to the reality of the fact that the child truly may be gender-nonconforming and has a legitimate right to pursue life with a different gender identity than the one assigned at birth,” Judge Hendon wrote in her decision.
www.washingtontimes.com/news/2018/feb/20/religious-parents-lose-custody-transgender-teen/
Now what do you think our founders would have had to say about that if they could have only seen into the future?

As Justice Scalia ably articulated in Heller, the Second Amendment was designed to protect what Blackstone called “the natural right of resistance and self-preservation.” Without access to the weapons in common use in our time, the law-abiding citizen will grow increasingly — and intolerably — vulnerable to the lawless. Thus, to properly defend life and liberty, access to assault weapons and high-capacity magazines isn’t a luxury; it’s a necessity.

READ  Loudoun County Eighth-Grade Girl Defends Her Right Not To Change In Front Of Boys
READ  Clowns to the left of us, rogues to the right – here we are, stuck in the middle of poo
774 views

2 thoughts on “Clarence Thomas: The 2nd Amendment a Disfavored Right”