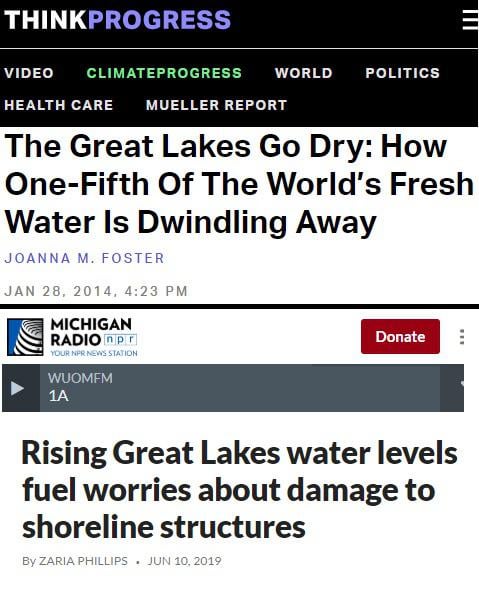 Largest glacier in Greenland is growing for third year in a row, thickening occurring across an increasingly wide area

US National Park Service (Glacier MT) showing signs of going straight (toward truth). Could it be “something to do with the Meander Minimum?”

The Stubborn Glaciers of Montana

The first headline is speaking in the present perfect tense. “are dwindling away”. It does not infer a long term trend, it infers it is happening now (2014). It didn’t happen.

Just another example of crying wolf and being wrong. There are many, many more examples.

1.“Due to global warming, the coming winters in the local regions will become milder.”

3** “More heat waves, no snow in the winter… Climate models… over 20 times more precise than the UN IPCC global models. In no other country do we have more precise calculations of climate consequences. They should form the basis for political planning… Temperatures in the wintertime will rise the most… there will be less cold air coming to Central Europe from the east…In the Alps winters will be 2°C warmer already between 2021 and 2050.”**

4.–“The new Germany will be characterized by dry-hot summers and warm-wet winters.”

5.“Clear climate trends are seen from the computer simulations. Foremost the winter months will be warmer all over Germany. Depending of CO2 emissions, temperatures will rise by up to 4°C, in the Alps by up to 5°C.”

6.“In summer under certain conditions the scientists reckon with a complete melting of the Arctic sea ice. For Europe we expect an increase in drier and warmer summers. Winters on the other hand will be warmer and wetter.”

7.“The more than ‘unusually ‘warm January weather is yet ‘another extreme event’, ‘a harbinger of the winters that are ahead of us’. … The global temperature will ‘increase every year by 0.2°C’”

8.“Harsh winters likely will be more seldom and precipitation in the wintertime will be heavier everywhere. However, due to the milder temperatures, it’ll fall more often as rain than as snow.”

9.“We’ve mostly had mild winters in which only a few cold months were scattered about, like January 2009. This winter is a cold outlier, but that doesn’t change the picture as a whole. Generally it’s going to get warmer, also in the wintertime.”

10.–“Winters with strong frost and lots of snow like we had 20 years ago will cease to exist at our latitudes.”**

12.“In the northern part of the continent there likely will be some benefits in the form of reduced cold periods and higher agricultural yields. But the continued increase in temperatures will cancel off these benefits. In some regions up to 60% of the species could die off by 2080.”

13.“Although the magnitude of the trends shows large variation among different models, Miller et al. (2006) find that none of the 14 models exhibits a trend towards a lower NAM index and higher arctic SLP.”

14.“Based on the rising temperature, less snow will be expected regionally. While currently 1/3 of the precipitation in the Alps falls as snow, the snow-share of precipitation by the end of the century could end up being just one sixth.”

15.“Assuming there will be a doubling of CO2 in the atmosphere, as is projected by the year 2030. The consequences could be hotter and drier summers, and winters warmer and wetter. Such a warming will be proportionately higher at higher elevations – and especially will have a powerful impact on the glaciers of the Firn regions.”

“The ski areas that reliably have snow will shift from 1200 meters to 1500 meters elevation by the year 2050; because of the climate prognoses warmer winters have to be anticipated.”

Why are banks still financing homes on the coast of Florida? Why dont investment disclosures warn of the risk of total loss within x amount of years? I see few organizations positioning themselves defensively against climate change; I see many capitalizing on ‘green’ branding. I’m butchering the argument, but Dan Pena makes the argument much clearer if it’s something peaks your interest.

Why would the power of the banking industry not take rising sea levels into any sort of consideration? Just ponder that — I couldn’t come up with an answer that made sense for myself. I’m not saying I’m sure I’m correct; I’m just not sure why, like you said, we trusted scientists and fixed the problem before, but we wont now? The #1 greenhouse gas polluter in the world is the US military industrial complex. Shouldn’t we be scaling back military operations in response? Shouldn’t we be avoiding confrontation with Iran at all costs? Shouldn’t private jets be outlawed? Why is the only proposed solution for climate change put on the populus, rather than the biggest perpetrators?

I’m honestly not trying to be a dick. These are questions I couldn’t rectify with reality if climate change is real. Canada and Europe tax gas usage in the name of climate change. If it’s so dire and drastic, let’s outlaw petroleum, no?