On June 24, the Champlain Towers South condominium building fell, killing at least 24 people. The collapse of this building provides a surprising number of insights into the collapse of a currency.

The following discussion is based on information that is emerging about the incident. Some of the particular details we cite may later prove to be wrong. Our focus is not to try to prescribe remedies for the construction or maintenance industries, but to shed light on problems in our monetary system.

The first take-away from this disaster is that problems can fester for a long time. Years, or even decades, can go by.

During this time, the parties responsible are surely telling themselves that “it works”. By “work” they mean they are getting away with it.

It doesn’t really work, but the consequences are postponed for a long time.

Two, the politicization of decision-making is an important factor. Especially where there is a long-term capital investment, and something like a fiduciary duty of care.

The condo Board is not just a social club, deciding how to decorate the Clubhouse for the Fourth of July. They have a duty to hire engineering firms to assess the health of their building, and to hire contractors to perform the maintenance recommended by the engineers.

Unfortunately, some people think that if the consequences are off in the future, they can squander time and money. They fail to realize that it’s much easier to pay for maintenance, via a small charge every month, than it is to wait until there is a crisis and then assess a large amount. Maintenance deferred becomes more expensive.

Three, there is an element of dishonesty. No matter how nice the Board members may have been, wishing everyone “good day” at the pool, they were dishonest in a sense.

By their actions, and their inactions, by their words, and by the words they did not say, they led the residents to think that the building was safe. All during the time when it was gradually decaying. And up until the moment when it fell. The Board was getting away with it, while knowing that it cannot be gotten away with forever.

See also  Global Currency Collapse Will Get MUCH Worse.

Four, it seems likely there was a corrupt element. Cronyism.

We are not casting aspersions on the Board of this particular building, but instead speaking in general to all situations of long-term neglect of maintenance required for safety.

From voting not to increase the assessment, out of deference to some residents who may have wanted to sell soon or who were old enough that they expected that any disaster would be after they were gone, to the choice of engineering firms and those contractors they hired, there is often a perverse incentive at work.

Board members will not gain any popularity, if they vote for big assessments to spend on things that most people don’t see. Conversely, those who say there’s no need to spend now will win over most of the residents who vote for their reelection.

Five, this is a clear example of consumption of capital. While their building decayed, leading inexorably towards its collapse, the residents were spending more on Bimmers, boats, and benders to Vegas than they could really afford.

If, that is, they were paying for the necessary work to keep their tower standing.

By not paying to upkeep the capital in the form of the building, they could consume more. It’s a false economy, that seems to be working for decades.

Six, and this may be the most counterintuitive point about the monetary system. We hope that seeing it in this analogous situation with a collapsed building, it becomes clearer.

The decay in value—and certainly market price—is not linear. We assume that the selling price of a condo in this building held steady up until 23 June. Zillow shows one unit sold for $700k as late as 17 June. On 24 June, the price went to zero. 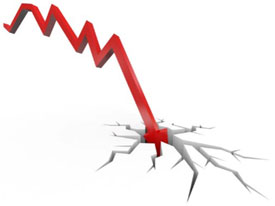 This is because it’s not a problem of quantity, dilution, hidden tax, or a transfer of purchasing power. It is a problem of soundness. That is, the building slowly became unsound as the structure rotted. Then it failed, catastrophically. Such failures tend to be that way.

See also  Will The Collapse Of Credit Suisse Be Europe’s “Lehman Brothers Moment”?

Finally, there are horrific consequences.

These are suffered by guilty and innocent alike. Whether one voted for or against spending to repair the building, one can be killed in the collapse. And the same is true about monetary collapse. Indeed, in a catastrophic failure, one may be lucky to get out alive.

In certain things, there are perverse incentives. Those in charge seek to cheat, neglect the capital, and conceal the consequences. So consumptions of the edifice on which everyone depends continues.

This dynamic is especially dangerous when the people are aggressively indifferent, when they eagerly look away because they feel it expedient to do so. On the surface, everything seems to be working, which is to say they’re temporarily getting away with it.

But the structure that holds it up is degrading. This process can go for a long time, perhaps many decades.