After my last two posts in Tesla, I was planning to take a break from the company, since I had said everything that I had to say about the company. In short, I argued that Tesla, notwithstanding its growth potential, was over valued and that to deliver on this potential, it would need to raise significant amounts of capital in the next few years. In an even earlier post, I described Tesla as the ultimate story stock, both blessed and cursed by having Elon Musk as a CEO, a visionary with a self destructive streak.  Even by Musk’s own standards, his tweet on August 7 that Tesla would be going private, adding both a price ($420) and a postscript (that funding had been secured), was a blockbuster, pushung the stock price up more than 10% for the day. The questions that have followed have been wide ranging, from whether Tesla is a good candidate for  “going private” to the mechanics of how it will do so (about funding and structure) to the legality of conveying a market-moving news story in a tweet.
1. Public to Private – The Why
When we talk about transitions between private and public market places, we generally tend to focus on private companies going public. That is because it is natural and common for a small, privately owned business, as it grows larger, to move to public markets, with an initial public offering. That said, there are publicly traded companies that seem to move in reverse and go back to being privately run businesses, as Tesla may be proposing to do.
The Trade Off
To understand both transitions, the more-common private to public and the less-frequent pubic to private, let us consider the trade off between being a private business and a publicly traded company, from the perspective of the business:
The simple summary is that as a private company’s need to access capital increases, it will accept more information disclosure and a more outsider-driven corporate governance structure, and make the transition to being a public company.  In recent years, the market for private equity has broadened and become deeper, allowing companies to stay private for far longer; Uber, for instance, is worth tens of billions of dollars and is still a private company. To fully understand the transitions, though,  we also have to look at the choice from the perspective of investors:
In the classic structure of going public, private firms raise money from venture capitalists who accept less liquidity, but structure their equity investments to often get more protection and a bigger say in how the company is run. It is the desire for liquidity that makes venture capitalists push private companies to go public, so that they can cash out their investments. To be able to negotiate better disclosure and control, private company investors have to be investing larger amounts, and it is one reason that regulatory authorities have been wary of allowing small investors to invest in private companies, since they may end up with the worst of all worlds: illiquid investments in businesses, where they have no say in how the company is run, and no information about how well or badly it is doing.
The Public to Private Transition
With this trade off in mind, why would a public company choose to go back to being a private business? This transition makes sense if a company feels that the easier access to capital and a continuously set market price (which delivers liquidity), two features of public markets, no longer provide it with sufficient benefits, and/or the costs of disclosure and outsider intervention (from activist investors), that also come with being a public company, increase. In short, it has to be a company:
It should come as no surprise that most companies that have gone through the public-to-private transition have been aging companies (no growth, no capital needed), trading at prices that are below their peer group (lower multiples of earnings or cash flows) and that need to shrink or slim down to keep operating.
The Tesla Case
As I look at the list of criteria for a good buyout company, I see nothing that would bring Tesla onto my radar as a potential candidate:
There are, of course, the short sellers in Tesla and Musk’s frustration with them was clearly a driver of his “going private” tweet. His argument, which many of his supporters buy into, is that short sellers in public markets make money from seeing stock prices go down, and that some of them may do real damage to companies, because of this incentive. I will not dismiss this complaint, but I will come back to it later in this post, since I do think it is playing an outsized role in this process.
Public to Private – The Funding
When you decide to take a publicly traded company into the privately owned space, you have to replace the public capital (public equity and debt) with new capital that can be either private equity or new debt.

The key questions then become what mix of debt and equity to use, how to raise the private equity needed to get the deal done and what the ultimate end game is in the transaction. Specifically, you may take a company private, because you want to control its destiny fully, and keep tit a private business in perpetuity. More often, though, the end game is to make the changes that you think will make the company more attractive to investors, and either take it back public or sell it to another public company.
The Analysis
If the company in question fits the buyout mold, i.e., it is an aging company with a lower market capitalization, relative to earnings and cash flows, than its peers, the going private transaction can be funded with a high proportion of debt, explaining why so many buyouts have leverage attached to them, making them leveraged buyouts.

Given that the equity investors in the transactions have to give up public market governance tools, it should come as no surprise that in many of these deals, the private equity comes from a single firm, like KKR or Blackstone, with top managers holding some of the private equity, to align interests, after the deal goes through. Success in these deals comes from taking the reconfigured company public again, at a much higher value, leaving equity investors with outsized gains.
The Tesla Case
Tesla is a money-losing company, burning through significant amounts of cash. Not only is the company in no position to borrow more, I have argued before that it should not even carry the debt that it does. If this deal is to make sense, it has to be predominantly equity funded, but that does create some challenges.
1. The No-pain solution: Musk, in his Tuesday tweets, seems to offer a solution, which, if feasible, would be relatively painless. In his set up, existing shareholders will be allowed to exchange their shares in Tesla, the public company, for shares in Tesla, the private business, and those shareholders who are unwilling to take this offer will sell their shares back to the company at $420/share. In the extreme case, where every existing shareholder takes this offer and if existing debt holders are willing to continue to lend to the new private enterprise, Tesla will need no new funding: 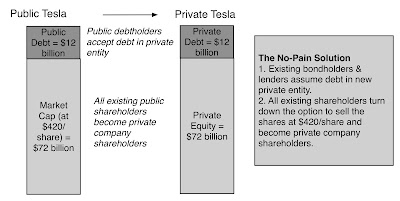