Vladimir Putin recently addressed the need for Russia to move away from USD-denominated trade, especially in the oil market.

Russia continues to take actions on two fronts to make this a reality; they are an active participant in China’s new petro-yuan backed oil exchange, and the country is now into its fourth straight year of nonstop monthly gold purchases

“We need to increase the level of our economic sovereignty but this is not a straightforward decision,” Putin said. “Oil is traded in dollars on the exchange.”

“Certainly, we are thinking about what we need to do in order to get free of this burden. Furthermore, our partners are helping us by introducing all these unlawful restrictions and violating principles of the global trade, because the whole world sees the dollar monopoly is unreliable; it is dangerous for many, not only for us,” he added. 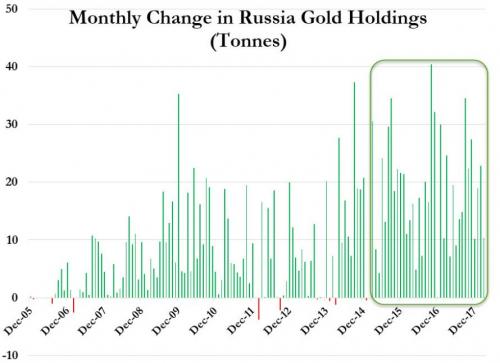 Russia bought another 300,000 troy ounces of gold in March bringing Russia’s total gold reserves to 1,891 tonnes or 60.8 million troy ounces as of the start of April, the central bank announced loudly at the weekend.

The build-up of gold reserves by non-Western countries is something which could end up tipping the scales of the global order.

Many believe that should bad relations continue between the US and these nations then US-denominated assets currently held in forex holdings by the relevant central banks, could be dumped for alternatives. Nations may opt to diversify into the Chinese yuan (in the case of Russia) but also gold. Most likely it would just take either Russia or China to do this, before many others followed suit.