The 2008 financial crisis hit China hard, as it did everyone else.

Not every country responded like China did, though. Most couldn’t do what China did because they lacked either financial resources or political ability.

China had both. And so it launched a stimulus program of mind-boggling proportions.

The intention was to put people to work and bolster public confidence.

It’s no surprise that China has doubled its debt relative to GDP since 2000. And the bulk of that was after 2009: 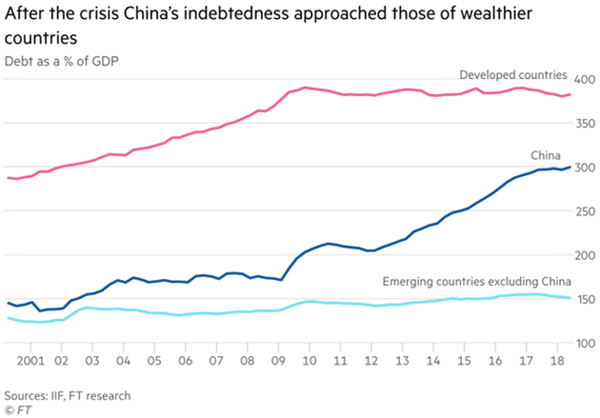 But it’s how they grew that debt I find amazing. Half of the total debt is from the nonfinancial (i.e., shadow banks) sector. 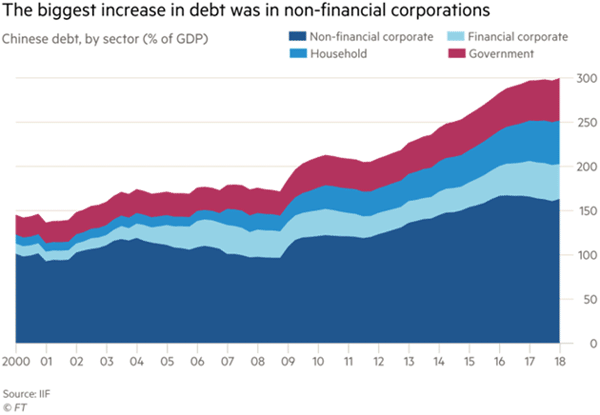 And remember that the Chinese economy is managed from the top down. So the Chinese government is very aware of how its shadow banking system operates.

This Debt Has to Be Paid Off—Sooner or Later

All of this debt has a carrying cost. Even in a top-down economy. Yes, much of it is internal. But China also has a big amount of dollar-denominated debt.

According to official data, short-term debt accounted for 62 percent of the total [of almost $2 trillion in debt] as of September, meaning that $1.2 trillion will have to be rolled over this year. Just as worrying is the speed of increase: Total external debt has increased 14 percent in the past year and 35 percent since the beginning of 2017.

External debt is no longer a trivial slice of China’s foreign-exchange reserves, which stood at just over $3 trillion at the end of November, little changed from two years earlier. Short-term foreign debt increased to 39 percent of reserves in September, from 26 percent in March 2016.

The true picture may be more precarious. China’s external debt was estimated between $3 trillion and $3.5 trillion by Daiwa Capital Markets in an August report. In other words, total foreign liabilities could be understated by as much as $1.5 trillion after accounting for borrowing in financial centres such as Hong Kong, New York, and the Caribbean islands that isn’t included in the official tally.

So, China could owe non-Chinese lenders as much as $3.5 trillion. Much of it is in USD which are more expensive than they used to be.

This is why a trade war is so threatening to China. Revenue from exports to the US helps pay that debt.

The internal debt is also a problem.

Yes, a state-dominated economy like China’s can deal with debt in its own currency. It has many ways to extend and pretend.

But they have limits and don’t work forever. The debt eventually has to be worked off.

Worse, debt is like drugs to which the body adapts. Then you need more to get the same effect.

Likewise, debt is no longer having the same effect on China. An IMF study last year estimated that in less than a decade, the amount of debt needed to produce the same GDP output more than tripled.

That tells us something important. In the next downturn, slowdown, or whatever you call it, Beijing may not be able to borrow its way out of the hole.

Or if it does, the amounts could be astronomically high.

But absent debt stimulus, what else can they do? I seriously doubt Xi Jinping has any way to restore growth to what everyone wants without massive adjustments.

That being the case, it’s not the best time for a trade war between the US and China. Yet we find ourselves in one.

(Quick disclaimer: Yes, China hasn’t played fairly in a number of ways. I get that. We have issues and problems that need resolution. Prior efforts haven’t worked. I get that, too. We have national security concerns about China, totally apart from our trade disputes. Granted on all counts.)

But it does not mean that slapping tariffs on Chinese imports is the right answer. We have to fix these things, but without shooting our own feet.

American and Chinese businesses have spent the last two decades integrating supply chains. The markets have been built on this integration. Every one of us benefits from it every single day.

Could we reverse the integration and become less interdependent? Yes, of course.

It’s happening already due to technology that is moving production closer to consumers. That’s a natural process that will continue.

Rushing that process, while probably possible, would have a cost.

One of my greatest short-term fears is that Trump’s hardline tactics will push China into recession. For them, less than 4% growth.

The president himself seems to relish the prospect. He’s talked proudly of the way Chinese markets fell due to his policies.

Maybe he thinks the threats will make Xi back down. I don’t think they will. We are pursuing a high-risk policy that will have massively negative consequences if it fails.