We often hear the economists raising the most profound questions of declining living standards in the U.S. We have analyzed this issue and here is the analysis build using various sources.

Per capita gross domestic product is much higher in the U.S. than in the other major developed economies, and no one really seems to be catching up:

Source: Bloomberg
Life expectancy, on the other hand, is lower in the U.S. than in those same peer countries — and the gap has been growing.

Recent research by Princeton University economists Anne Case and Angus Deaton, however, shows that since 1999 longevity gains have slowed most dramatically, and in some cases reversed, among white Americans. This is from their latest bombshell paper, released last week:

Source: Bloomberg
Nicholas Eberstadt’s in his book Men Without Work states: “The progressive detachment of so many adult American men from the reality and routines of regular paid labor poses a threat to our nation’s future prosperity. It can only result in lower living standards, greater economic disparities, and slower economic growth than we might otherwise expect. And the troubles posed by this male flight from work are by no means solely economic. It is also a social crisis – and, I shall argue, a moral crisis.”

Larry Summers did a review of Eberstadt’s book for the Financial Times. In a blog post about his review, he offers this rather sobering prediction: “Job destruction caused by technology is not a futuristic concern. It is something we have been living with for two generations. A simple linear trend suggests that by mid-century about ¼ of men in the US aged between 25 and 54 will not be working at any moment.” 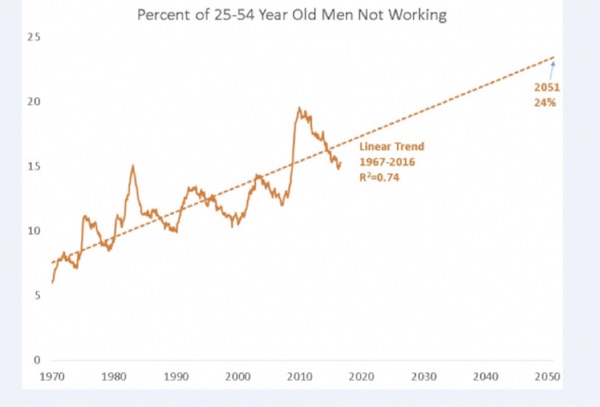 The rate of deep poverty — defined as the share living on a household income less than half of the official poverty level — increased among the group of people who are not working, from 32 percent in 1996 to around 40 percent in 2013. Source: washingtonpost
Poverty is higher in U.S. than it was in 1996 as is shown in the chart given below. 
Despite of all this the U.S. economy’s ability to keep finding new ways to grow, and keep spawning world-beating corporations that lead that growth, is a remarkable thing. But it clearly hasn’t been enough to keep living standards from declining for large swaths of the population. And countries with big welfare states have done a better job of maintaining living standards than the U.S. has. If we buy the notion that welfare states slow growth, then the U.S. has made a possibly reasonable tradeoff. If this notion is wrong (and there are economists who argue that real-world welfare states have been a “free lunch”), then the U.S. certainly has followed a wrong path.

1 thought on “Declining Living Standards In The U.S.; Myth Or Reality?”