In April, an op-ed in The Wall Street Journal titled “So Long, California. Sayonara, New York,” published by conservative economists Arthur Laffer and Stephen Moore, warned about a provision within the brand- new tax bill that could trigger a mass migration of roughly 800,000 people — fleeing California and New York for low-tax states over the next several years.

Laffer and Moore said capping the deduction for state and local taxes (SALT) to $10,000 will accelerate the velocity of the migration of high-income earners from New York and California to regions like “Arizona, Nevada, Tennessee, Texas, and Utah.”

Now that the SALT subsidy is passed, how bad will it get for high-tax blue states, and more specifically New York?

New evidence suggests that New York City could be the first visible region where the mass migration could begin. Take, for example, the number of homes listed for sale in Manhattan, Brooklyn, and Queens had a parabolic spike in May, with inventory across 60 percent of the boroughs reaching all-time highs, according to the latest StreetEasy Market Report. While residential inventory traditionally peaks at the end of May, this year — the supply set new record highs and could continue through summer.

Laffer and Moore’s prophecy (above) of the great migration from New York — triggered by Trump’s new tax bill could be the most logical explanation of why NYC homeowners are rushing all at once to sell their homes.

With housing inventory piling up across much of the boroughs, the total number of sales declined for the third consecutive month. StreetEasy said sales plummeted in every submarket across Brooklyn, Manhattan, and Queens; with more significant declines visible in the Upper East Side, Midtown and the Rockaways. Despite the flood of new inventory threatening to stall the market, the StreetEasy Price Index advanced in all three boroughs since last year.

“Sellers are betting on a wave of demand from the peak shopping season, but this summer’s market has turned out to be a crowded one,” says StreetEasy Senior Economist Grant Long.

“However, prices are high and continue to rise. More affordable homes are the hardest to find, and are sure to sell quickly. But higher-end homes, particularly those joining the market from the ongoing stream of new development, will be pressured to lower prices or linger on the market.

This summer is poised to offer an excellent negotiating opportunity for buyers with big budgets.”

As Bloomberg notes, the abnormal amount of supply hitting the NYC residential markets is not sufficiently being met with demand, which could eventually be problematic for prices and serve as a potential turning point. Recently, the mainstream media cleverly changed their narrative and called the ‘housing shortage,’ a ‘housing affordability crisis,’ as it sure seems that the housing bubble, or whatever you want to call it, is in the later innings.

See below for more StreetEasy trends across Manhattan, Brooklyn, and Queens: 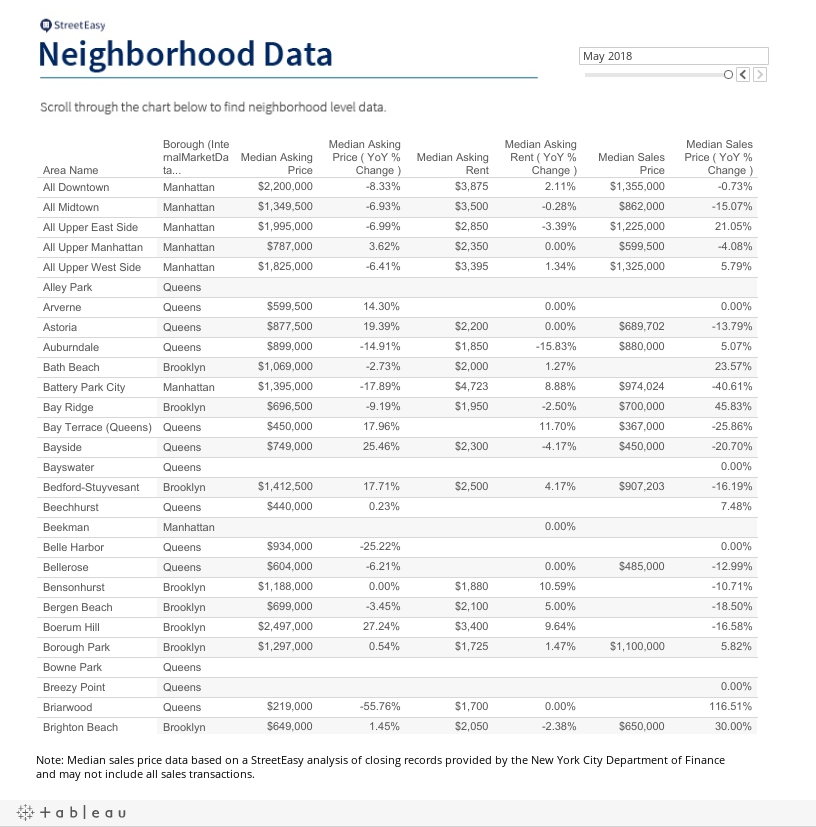