Almost half of all homeless people in the United States are in California with 19% living in Los Angeles. This is just one of many problems residents of California face since the criminal organization democrat party got control of the state. The top three things you can always count on the democrats are being dishonest, corruption and destroying everything they touch.   The first two is how they got control of California.  It appears they are making a huge effort to accomplish the third in California.  At times there seems to be no logic, no intelligence behind some of the decisions they make.  It does not appear that they are concerned the Residents of California.

They didn’t get full control overnight.  It took a few years but they were successful.   Dishonest, but successful.  They got there by winning elections.  When it comes to elections, “Democrat” is synonymous to “election fraud”.  I have yet to see an honest democrat.

In California, the Secretary of State responsible for securing the elections.  “An election is only as fair and honest as the people that oversee it.”

Lets go back to 2007.  Voting systems compromised by democrats

Debra Lynn Bowen , a member of the Democratic Party, was the Secretary of State of California from 2007 to 2015.  In  2007  Bowen commissioned a “Top to Bottom Review” of California’s electronic voting systems, to determine their security.  In August  2007, Bowen withdrew approval and certification and conditionally re-approved three electronic voting systems (Diebold Election Systems, Hart InterCivic, Sequoia Voting Systems), and rescinded approval of a fourth system, (Election Systems & Software), after the top-to-bottom review of the voting machines found the machines to be highly insecure.  So basically after finding the systems faulty, no real changes were made.  For these efforts she was awarded the Profile in Courage Award by the John F. Kennedy Presidential Library and Museum.  Which is about as laughable as Obama’s Nobel prize.

*The following election in 2008 is where we see an increase of democrat voters and a decline of republican voters.  This trend repeating  itself each year until present date.

Below are screen shots of the voting systems used in California before the review and after the review.  I’ve also provided links to view the voting systems from 2006 to 2018. Clicking on the year will link you to the original PDF.  I should point out that between 2008 and 2018 some of the counties  switched brands of equipment.  Some of the new brands of equipment are the the same company as the original ones, Same product with a new name .  All of these, new and old have a history of errors.  None of them are 100% secure. For more details about security of each brand and general information click here  and scroll to the lower part of page.   Far too much for me to cover today but is worth taking the time to take a look. 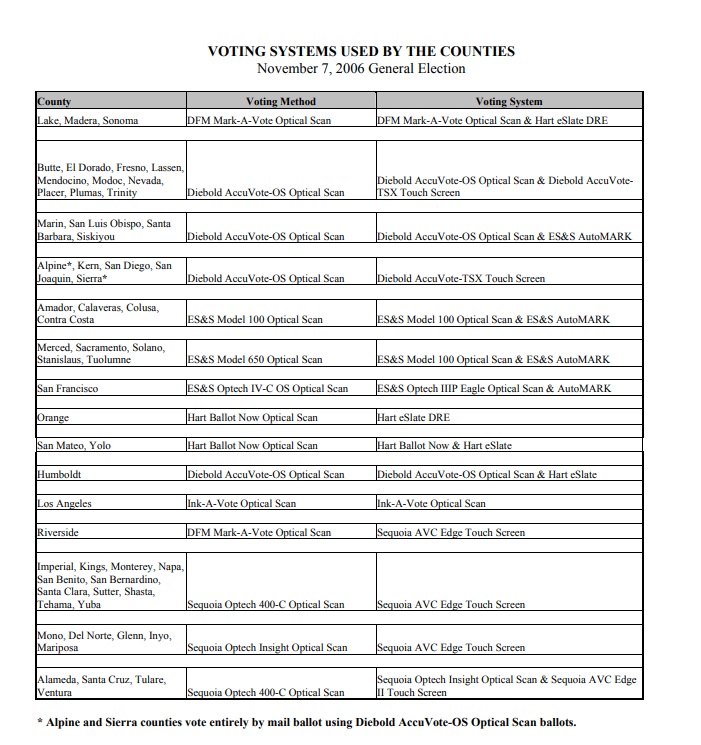 In 2015 California got a new Secretary of State. Alex Padilla, a democrat.   After the 2018 elections, Padilla made a decision to replace all voting machines in California. “Padilla has long been concerned about the vulnerability of the nation’s voting machines. “We have done more to respond to hanging chads,” he told NBC News, “than we have done to respond to Vladimir Putin and the threats by Russian intelligence officials against our elections.”    Many of the current systems have only been used once, some twice.  Why didn’t he  replace them before the 2018 elections?    A feature with some of the current systems is that they record voting data that can be reviewed for a recount or audit.  Maybe that’s why he is in such a rush to change machines.

There are more changes in California.  Tens of thousands of neighborhood polling places, are being replaced by absentee ballots and secure drop boxes.  This only creates more opportunities for voter fraud.

Since “voter fraud” came up, we have to take a minute to talk about the democrats and the 2018 elections in California.  At the end of election day all republican candidates were leading in votes.  After the mail in votes were counted and the votes the democrats turned in (ballot harvesting), every republican ended up losing.  Many people blame this on the fact that democrat lawmakers in California made changes with ballot harvesting, creating more opportunities for voter fraud.  That is entirely possible but I think there was a bigger problem.

In California, county clerks are required to examine, one percent of their electorate’s original paper ballots once they have been electronically tabulated to ensure that the machines’ results have not been compromised and are accurate. The inspection is only applied to ballots that have been turned in before or on election day.  Anything after election day do not get inspected.   This means that millions of  Vote-By-Mail (VBM) and provisional ballots are exempted from further examination.  In California about 1/3 of the votes were mail in.  This is how I believe the democrats stole the election in 2018.

Another problem is California’s automatic voter registration at the DMV.  Beside their new Kiosk being totally insecure and are waiting to be hacked.   Some past problems with the automatic voter registration are , mistaken records showing up at local election offices, upward of 100,000 inaccurate documents. Party preferences were wrong. Some non-citizens were mistakenly added to the voter rolls. Other DMV customers didn’t know they’d been registered. These errors were blamed on hackers.  These events happened 6 days before the program was launched.  Since then, at least 255k voter registration errors have been found.  Padilla none of the errors effected the election results in 2018.  He also blames the DMV  for the problems, but the only person responsible is Padilla himself .Bill AB 1461 Motor voter program.   What is also interesting is that  since the automatic voter registration launched,  there has been  an increase of registered democrats and a increase in “no party preference” with a decline of registered republicans. 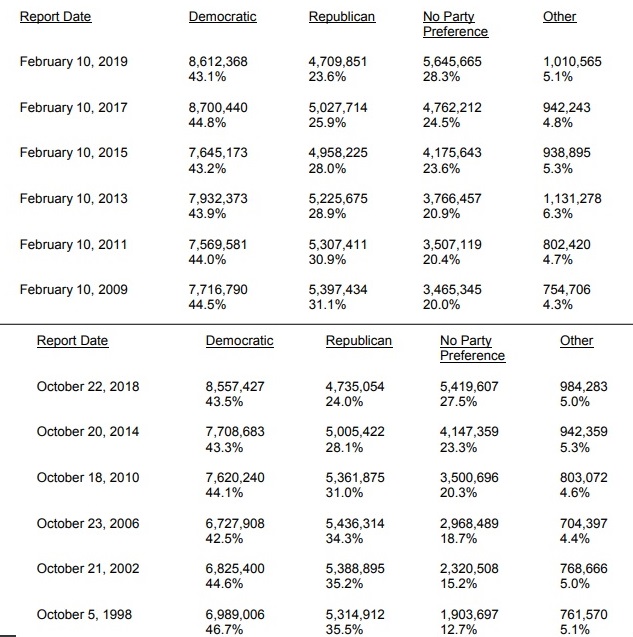 Currently it looks as democrats are making a huge effort to make elections less secure.  I also don’t believe the number of republicans are declining in California.  I think it’s just another part of the democrats con game for reasons I will discuss at a future date.  There is a bigger problem in California.  A problem that all residents of California should be concerned about.

Taking on the problems that exist at Californias’ DMV , Gavin Newsom made the decision to bring in a third party to solve the problem.  This was part of his “strike team?  The third party is “Code for America “  Code for America  describes themselves as follows, “We are a network of people making government work for the people, by the people, in the digital age. How do we get there? With government services that are simple, effective, and easy to use, working at scale to help all Americans, starting with the people who need them most.”.  They also like to refer themselves as “civic hackers”.  Their 60 member team is made up of 43 women and 17 men. They have 7 members on their Board of Directors.  One being the Founder and Executive Director who also heads the 60 member team.  At least 2 of the members were part of the Obama administration. They have 85 locations across the USA. Click here for a complete list of who funds them.  Here is a screen shot of the top donors.

Here is where you should be concerned.  Gavin Newsom gave full DMV access to Code for America.  That means that this group of “civic hackers” had full access all data, including voter information, of every resident in California.  Take a minute and think about what information the DMV  has on you.   Now what are the odds that 6  companies like Google that invested over $1,000,000 in Code for America now has that information.  Microsoft invested $999,000. You think they have your information.  Pretty good odds that your information is in their hands.  As if they didn’t have enough already. Go click the link I provided that shows who funds Code for America.  Actually here is the link again. Click here.

The data breach is only part of the problem.  Newsom brought in a non government source to make decisions  on how part of our state government should be operated.  That source being Code for America which all final decisions are made by 1 person.  That person is Jennifer Pahlka,

Jennifer Pahlka is the founder and executive director of Code for America. She served as the U.S. Deputy Chief Technology Officer in the White House Office of Science and Technology Policy from 2013–2014

Code for America getting full access to the DMV is pure speculation on my part.  Considering the circumstances I could not see how they could complete their task without access.  What I do know is that I don’t like third parties with their own agenda making  decisions on how to any part of the state should function.

Newsom is no stranger to Code for America as you can see here.

This is just another example of how the democrats are selling out the residents of California.  No matter where you stand in politics this is an issue everyone should be concerned about.

By now you should be just as confused as I am as far as my ballot situation goes.  I had an easier time signing up to run for president in 2020.

QAnon community-8chan will be up and running soon.