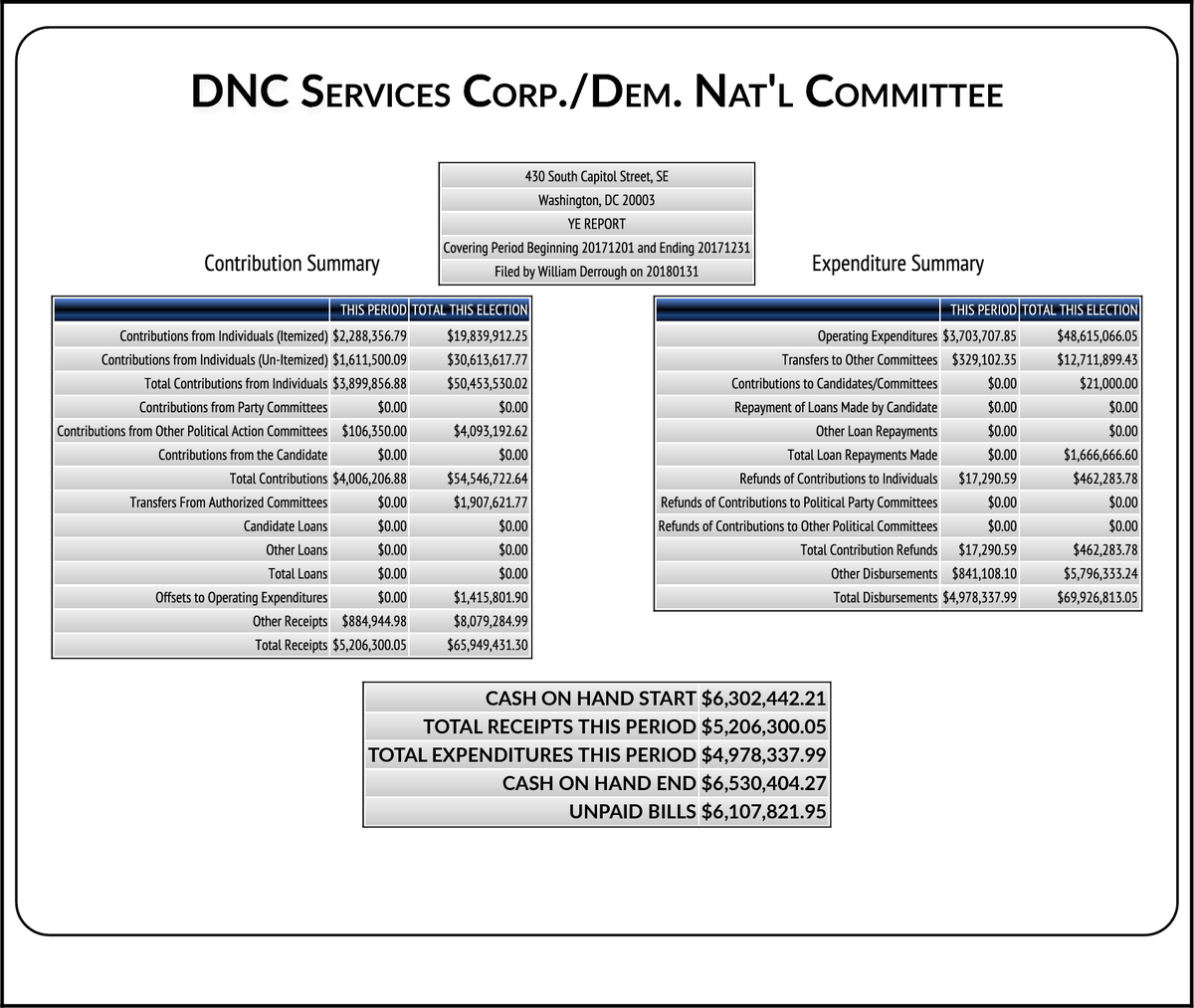 The DNC is reportedly ‘dead broke.’ The RNC has nearly $40 million.
10:25 a.m. ET
The Democratic National Committee had a rough 2017, plagued by leadership troubles, internal squabbling, and unflattering reports. To top it off, the party ended the year “dead broke,” says The Intercept’s Ryan Grim.
The Democratic Party is carrying more than $6 million in debt, according to year-end filings — and has just $6.5 million in the bank. Do the math, and the party is working with just over $400,000 overall. Meanwhile, the Republicans are swimming in pools of money. The Republican National Committee had raised $132 million by the end of 2017 — about twice as much as the DNC — and entered 2018 with almost $40 million to spare, with not a penny of debt.
theweek.com/speedreads/752743/dnc-reportedly-dead-broke-rnc-nearly-40-million
Billionaires backing away from Demoncraps
Steyer…Billionaire doner yanks funding from Dims.
dennismichaellynch.com/dem-billionaire-donor-yanks-funding-from-democratic-party/
Either because the Dims didn’t keep the Goobermunt shut down
or perhaps the real reason is that he might lose entire fortune if he is connected to Human trafficking
(TRUMP-EXECUTIVE ORDER)…and
corruption of the Dims-AHAHAHAHAHAHAHAHAHA-NOT FUNNY FOR
THOSE BEING TRAFFICKED !!!!!
WHAT TRUMP DID TO PROTECT THE “NEW” King of Saudi Arabia..
then the Saudi’s took out the CORRUPT Princes that
were funnneling money and perhaps other things to the Dims.
(supposedly 3,000 children SAVED from further abuse)
TRUMP is killing the swamp creatures by cutting their throats
and cutting out their hearts by cutting off the CORRUPT MONEY
that formally came from Saudi Arabia. (btw-there are many
GOPe-establishment republicraps- probably a majority…/
but they were under threat because BarrythePerv had “everything on everyone”…NOW TRUMP has everything
and can use it against the Swamp Creatures-some are not running for office …others are getting on the TRUMP-BANDWAGON.
Either go along with the NEW Godfather or….not.
It’s not personal….
it’s only business.


Maybe John McShitstain can bail them out? McCain hand delivered the dossier to the FBI.
www.thegatewaypundit.com/2017/10/idiot-rino-stooge-john-mccain-delivered-trump-dossier-fbi-investigation/
h/t OldWhiteGuy