‘The “anti-terrorism” Patriot Act is introduced in Congress on October 2, 2001 (see October 2, 2001), but it is not well received by all. [US CONGRESS, 10/2/2001] One day later, Senate Majority Leader and future anthrax target Tom Daschle (D-SD) says he doubts the Senate will take up this bill in the one week timetable the administration wants.’

Patriot Act and Other Political Implications

The “anti-terrorism” Patriot Act is introduced in Congress on October 2, 2001 (see October 2, 2001), but it is not well received by all. [US CONGRESS, 10/2/2001]One day later, Senate Majority Leader and future anthrax target Tom Daschle (D-SD) says he doubts the Senate will take up this bill in the one week timetable the administration wants. As head of the Senate, Daschle has great power to block or slow passage of the bill. Attorney General John Ashcroft accuses Senate Democrats of dragging their feet. [WASHINGTON POST, 10/3/2001] On October 4, Senate Judiciary Committee Chairman and future anthrax target Patrick Leahy (D-VT) accuses the Bush administration of reneging on an agreement on the bill. Leahy is in a key position to block or slow the bill. Some warn that “lawmakers are overlooking constitutional flaws in their rush to meet the administration’s timetable.” Two days later, Ashcroft complains about “the rather slow pace…over his request for law enforcement powers… Hard feelings remain.” [WASHINGTON POST, 10/4/2001] The anthrax letters to Daschle and Leahy are sent out between October 6-9 as difficulties in passing the Patriot Act continue (see October 6-9, 2001). 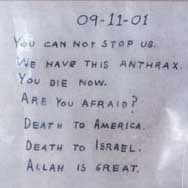 The message of the anthrax letter addressed to Tom Daschle. [Source: FBI]On October 9, two letters containing deadly anthrax spores are postmarked. One letter is sent to Senator Tom Daschle (D-SD) and the other is sent to Senator Patrick Leahy (D-VT). The letters are sent from a mailbox in Trenton, New Jersey. They could be sent any time after 5 p.m. on October 6 (the last pick up on the day, a Saturday), and before 5 p.m. on October 9. (There is no pickup on October 7, a Sunday, and October 8 is Columbus Day.) The letter to Daschle is opened by one of his staffers on October 15 (see October 15, 2001). It contains the message:

YOU CAN NOT STOP US.

WE HAVE THIS ANTHRAX.

ALLAH IS GREAT.
The writing is the same slanted, block style used in the earlier wave of anthrax letters (see September 17-18, 2001), and the content of the message is very similar. The letter to Leahy is mis-routed and not discovered until mid-November (see October 15, 2001). It contains the exact same message. Unlike the earlier wave of letters, both of these letters contain return addresses, but to bogus addresses in other New Jersey towns. The anthrax in the letters is also deadlier than the anthrax in the earlier letters. [VANITY FAIR, 9/15/2003]

On October 9, 2001, Senator Russ Feingold (D-WI) blocks an attempt to rush the Patriot Act to a vote with little debate and no opportunity for amendments. He criticizes the bill as a threat to civil liberties. [ASSOCIATED PRESS, 10/10/2001] One day earlier, in the story “Cracks in Bipartisanship Start to Show,” the Washington Post reported, “Congress has lost some of the shock-induced unity with which it first responded to the [9/11] attacks.” [WASHINGTON POST, 10/8/2001]Also on October 9, identical anthrax letters are postmarked in Trenton, New Jersey, with lethal doses to Senators Tom Daschle and Patrick Leahy. Inside both letters are the words, “Death to America, Death to Israel, Allah is Great” (see October 15, 2001). [ASSOCIATED PRESS, 8/7/2008]

FBI has no objection to the destruction of possible evidence

The federal inquiry into the anthrax attacks has stumbled in several areas and may have missed opportunities to gather valuable evidence as criminal investigators have been unable to fully grasp the scientific complexities of the case.

Government officials, scientists and investigators said the Federal Bureau of Investigation’s initial unfamiliarity with the intricacies of anthrax had contributed to a series of missteps and other possible errors.

The F.B.I. came under withering criticism this week in Congress for the lack of progress in the investigation, and bureau officials acknowledged in interviews that they had been forced to turn to outside experts for advice on how to investigate the most serious bioterrorism attack in the nation’s history. But they said the inquiry was following a logical strategy.

In a plan announced yesterday by Attorney General John Ashcroft, the bureau, and other parts of the Justice Department, would be revamped to better prevent terror attacks, and the government would use new powers to tap lawyer-client conversations with defendants in terrorist cases. [Page B1.]

Several experts, including some on whom the F.B.I. has relied, said the anthrax investigation had taken some wrong turns.

READ  Attacks On Independent/Alternative Media Intensify: Another Helpful, Informative And Very Useful Website Gets Defunded
READ  I don't know how much more anyone can take of this old man...

The role of the neocon thinktank Project for a New American Century in this is particularly interesting.

PNAC published the paper Rebuilding America’s Defenses in September 2000. It laid out plans for colossal increases in military spending and a “core mission” to “fight and decisively win multiple, simultaneous major theater wars.” But PNAC worried that their ambitions plans might take a while because “the process of transformation, even if it brings revolutionary change, is likely to be a long one, absent some catastrophic and catalyzing event – like a new Pearl Harbor.”

(Listen to General Wesley Clark explain how he was told right after 9/11 that the Secretary of Defense had a plan to take out 7 countries in 5 years: Iraq, Syria, Lebanon, Libya, Somalia, Sudan, and Iran. It seems that plan is still underway, though the time frame was a little ambitious.)

June 22-23, 2001, three months before the anthrax attacks there was a bioterror drill at Andrews Air Force Base called Operation Dark Winter that simulated a large-scale bioweapons attack on the US. Just like the real attacks, the script mentioned letters being sent to media and a threat of using anthrax. The June drill included fake news broadcasts played to the participants in the drill that were almost identical to ABC News stories that attempted to blame Al Qaeda and Iraq after the real anthrax attacks, which were later proven false.

“NCN has learned that Iraq may have provided the technology behind the attack to terrorist groups based in Afghanistan.”

On September 12th, 2001, the day after 9/11, and three weeks before the first anthrax attack infection, PNAC member Donald Kagan and his son Fred Kagan went on the Milt Rosenberg radio show and spoke about the supposed need to retaliate for 9/11 by attacking Palestine and Iraq. Incredibly, they also mentioned anthrax, saying “what would have happened, if instead of just having jet fuel on those planes, they had had anthrax bacilli?”

On September 16th 2001, two days before the anthrax letters were mailed, Richard Perle, Chairman of the Defense Policy Board Advisory Committee and a member of PNAC, appeared on CNN to warn that the next attack might be biological.

Also highly suggest you watch the excellent documentaries by Robbie Martin about PNAC and anthrax, American Anthrax and A Very Heavy Agenda.

Glenn Greenwald on the anthrax attacks: