According to the WGC, the latest leg of gold’s 2020 bull run has come too fast, but gold has still potential for further upside.

The World Gold Council has recently published a few interesting reports. Let’s analyze them and draw important conclusions for the precious metals investors!

I’ll start with the July Investment Update: “Gold hits record high: sprint or marathon?” about the summer’s rally in gold that elevated the price of the yellow metal to the new record high. According to the WGC, the combination of high uncertainty, easy monetary policy, very low interest rates, positive price momentum, the depreciation of the U.S. dollar, and fears of higher inflation fueled record flows of 734 tons into gold-backed ETFs in the first half of the year and the gold’s price appreciation:

Central banks have aggressively cut interest rates, often in combination with quantitative easing and other non-traditional policy measures. Governments have also approved massive rescue packages to support their local economies. And much more may be needed. These initiatives have increased concerns that easy money, rather than fundamentals, is fuelling the stock market rally and that all the extra money being pumped into the system may result in very high inflation or, at the very least, currency debasements.

Although the WGC correctly predicted price correction, given that the latest leg of gold’s 2020 bull run has come very fast, the gold’s industry organization believes that there is still room for further upside. It offers two arguments in support of this claim.

The first is that the price of gold more than doubled amid the Great Recession, while it has increased by just under 30 percent since the Covid-19 pandemic. For me, as history never repeats itself, but only rhymes, it would be naïve to expect similar price movement. After all, the quantitative easing is less scary today than a decade ago and we have not experienced so far the financial crisis. However, I agree that gold could go further north, especially that the current macroeconomic environment seems to be more inflationary than after the collapse of the Lehman Brothers.

The second argument is also very interesting, as it says that the price of gold, when adjusted for inflation, is still significantly below the levels seen in 2011 or 1980. Indeed, as the chart below shows, gold prices are about 9 and 18 percent shy of the previous peaks, respectively, when expressed in 1984 U.S. dollars. 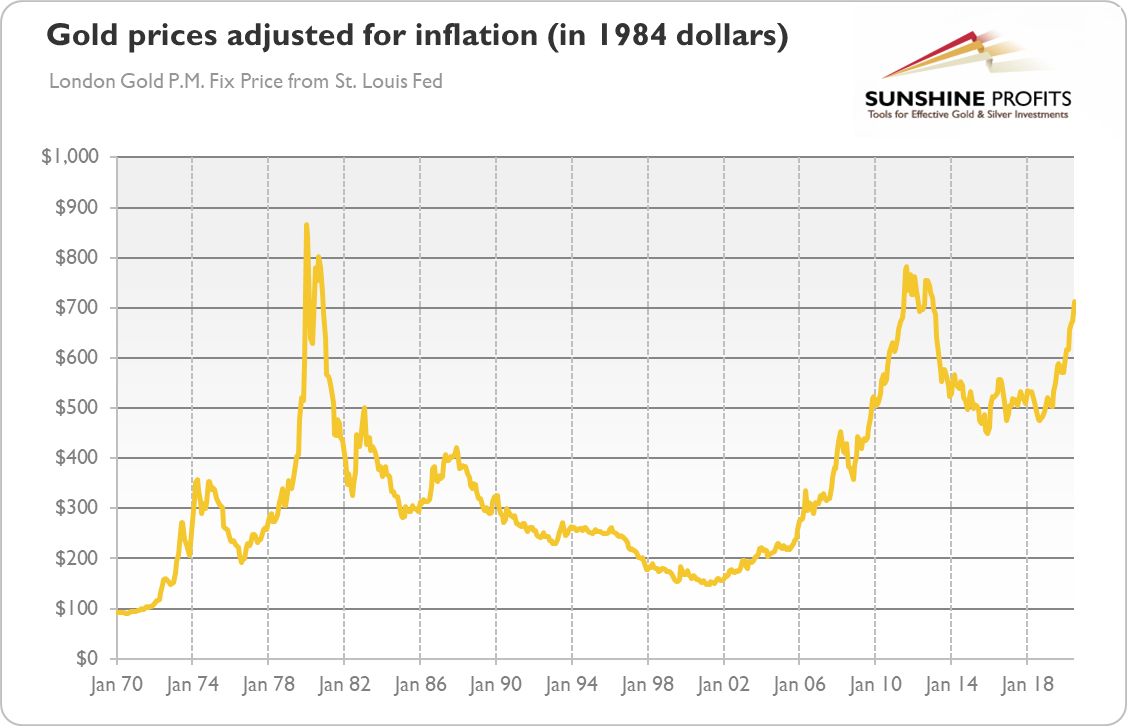 This is why many analysts believe that gold still has plenty of potential. For example, Nicholas Johnson, a PIMCO portfolio manager focusing on commodities, also noted that the real price of gold is currently below the levels during the 2008 financial crisis.

Currently, gold trades at the lower end of the post-2004 band. We think it’s likely, however, that its real-yield-adjusted price could move higher within that band, as gold’s recent strong performance attracts more interest in the market, similar to what occurred following the 2008 financial crisis.

Although I’m not fully convinced that we should look at real, not nominal prices, one can reasonably wonder whether gold shouldn’t rally stronger that during the global financial crisis given more aggressive character and larger scale of monetary stimulus and fiscal packages today.

The Role of Gold In a Volatile World

Another interesting piece from the WGC is an interview with Charles Crowson, Portfolio Manager at RWC Partners, entitled The role of gold in a volatile world.

He seems to agree with my observation that the current economic crisis could result in higher inflation than the Great Recession, which should be positive for the gold prices:

A combination of increased monetary supply, increased velocity of money and extremely low interest rates creates the perfect backdrop for inflation. It is also, incidentally, the perfect combination for gold to outperform. This occurred in the late 1970s, for instance, and gold went up fourfold. We are not at that stage yet but we are moving in that direction.

However, purchasing gold today is not only a great way of maintaining purchasing power over time, but “there is the potential both to preserve wealth and deliver outperformance by investing in gold.”

Another important issue raised in the interview is the potential for fundamental changes in asset allocation among investors. Gold is still under-owned in the investment community, as it accounts on average for merely about 0.5 percent of the portfolio, but in the current macroeconomic environment of very low real interest rates, weak U.S. dollar, expansionary monetary policies and ballooning fiscal deficits, the demand for gold as a portfolio diversifier could increase:

In recent decades, gold has been regarded as a peripheral asset within the institutional investment community. But we believe that markets are embarking on a period of change, which could provoke a fundamental shift in asset allocation.