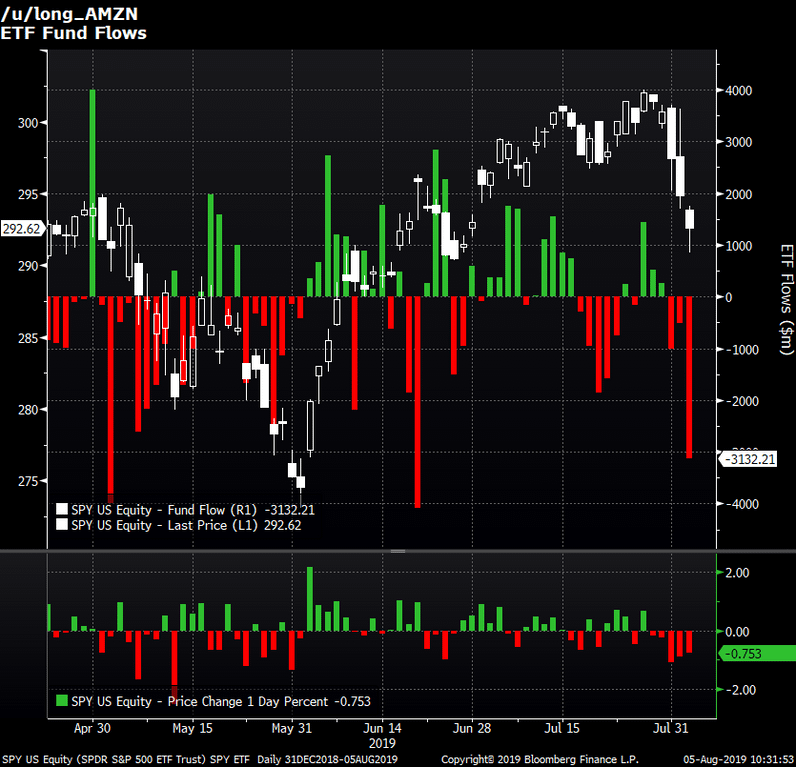 Thesis remains unchanged from my posts on previous days, but obviously with SPY going from 300 to sub 290 in 3 sessions we run risk of silly pops to the upside for no reason.

I would only advise buying puts if you want to capture the move between today and next two weeks, rather than trying to navigate the chop we’re gonna experience from day to day. Not advocating buying at open today unless you can stomach seeing -50% before seeing +100%. No earlier expiries than 08/23.

We’re in exactly the same situation as in May. Fed meeting at the end of April, Trump unhappy with Fed, Trump restarts trade war to push fed. Back then we just had a slew of great earnings, mood was fantastic. This is also where we are today. Fun fact – SPY dropped 1% or more only on 8 days this year. Four of those were in May (7th, 13th, 23rd and 31st) due to non-dovish fed and a new round of tariffs on China.

Not to repeat myself, my thoughts are summarised in the thread linked below and linked comments.

we were melting upwards on dovish fed and trade talks going well. Fed is not as dovish as we thought (‘mid cycle adjustment’) and china is about to cancel ags purchases, sept talks. Every time we sold off over the last 12 months was because of fed or china. Now is no different and it has nothing to do with technicals.If you really want them, support levels are: 2915 (fib retracement), 2903 (100D MA), 2879 (fib retracement), 2790 (200D MA)

I can’t see any reason why any buyer of a meaningful size would be buying this dip. Worst case they start liquidating a bit, best case they’ll stay on the sidelines and remove bid liquidity for a while.