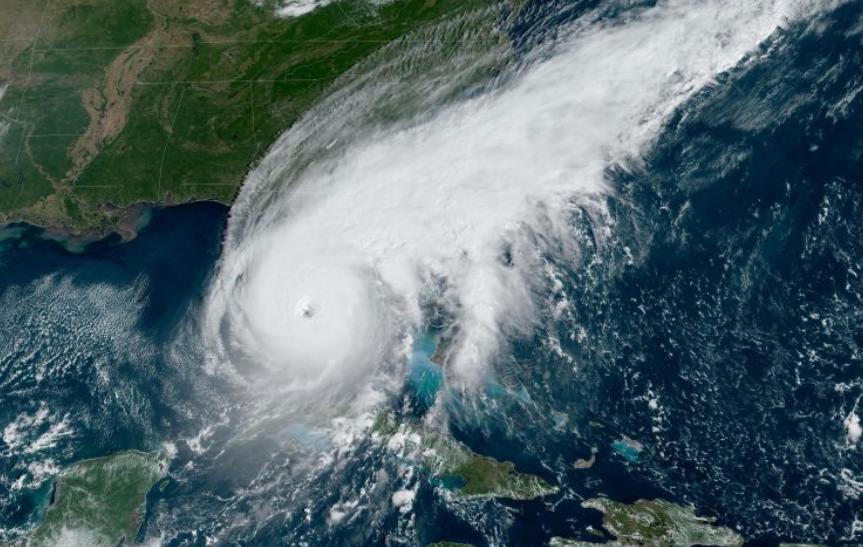 But this wasn’t supposed to happen.

Ian wasn’t supposed to be a “monster storm” when it slammed into the Florida coast, but in the final hours it absolutely “exploded” in intensity.

According to USA Today, Ian ultimately became “one of the most powerful storms in U.S. history”…

Hurricane Ian slammed into Florida’s southwestern coast Wednesday as one of the most powerful storms in U.S. history, tearing apart homes and buildings and leaving some residents stranded as storm surge flooded communities.

The storm made landfall near Cayo Costa as a Category 4 storm Wednesday afternoon with maximum sustained winds measured at a stunning 150 mph — only 7 mph slower than a Category 5, the highest status on the Saffir-Simpson Hurricane Scale of Hurricane Intensity.

Fort Myers got hit harder than just about anyone else.

Horrifying footage showed wave after wave pummel the small city, where an extreme wind warning is currently in effect, swallowing buildings and cars as the monster tempest finally made landfall on Wednesday.

It sees the ‘unsurvivable’ torrent of water engulf palm trees in the tropical resort and rip some from their roots as it was forced forwards by 155mph winds – only the fifth storm in history to hit land at that speed.

Social media is filled with videos of the carnage.

Got this from a friend in #Naples – just so sad. ⁦@ActionNewsJax⁩ #Ian pic.twitter.com/HtC0CtG228

At this hour, we are being told that 1.6 million Florida residents are without power.

As a potent Hurricane Ian made landfall in Southwest Florida, the top executive at Florida Power & Light warned residents in the storm’s path to expect “life-changing effects” from widespread and catastrophic damage to the state’s electrical grid that will take days, and in some cases weeks, to fully fix.

Speaking on a livestream from FPL’s Palm Beach County emergency command center, President and CEO Eric Silagy said the company expects it will have to completely rebuild sections of its electrical system given Ian’s massive size and powerful winds, as well as the extensive rainfall and flooding it’s forecast to generate.

When it is all said and done, I believe that the total economic damage will be in the hundreds of billions of dollars.

What most people do not realize is that this disaster perfectly fits a pattern that literally goes back for decades.

Over and over again, when our government is involved in an effort to divide the land of Israel, our nation is hit by some sort of a major disaster almost immediately afterwards.  The following list of 10 examples is based on a list that I shared in a previous article…

#1 On March 26th, 1979 the Egypt-Israel Peace Treaty was signed in Washington.  As a result of that treaty, Israel gave up a tremendous amount of territory.  Two days later, on March 28th, the worst nuclear power plant disaster in U.S. history made headlines all over the globe.

#2 On October 30th, 1991 President George H. W. Bush opened the Madrid Peace Conference which brought Israelis and Palestinians together to negotiate for the very first time. In his opening speech, Bush told Israel that “territorial compromise is essential for peace”. At the exact same time, “the Perfect Storm” was brewing in the north Atlantic. This legendary storm traveled 1000 miles the wrong direction and sent 35 foot waves slamming directly into President Bush’s home in Kennebunkport, Maine.

#3 On August 23rd, 1992 the Madrid Peace Conference moved to Washington D.C., and the very next day Hurricane Andrew made landfall in Florida causing 30 billion dollars in damage. It was the worst natural disaster up to that time in U.S. history.

#4 On January 16th, 1994 President Clinton met with President Assad of Syria to discuss the possibility of Israel giving up the Golan Heights. Within 24 hours, the devastating Northridge earthquake hit southern California. It was the second worst natural disaster up to that time in U.S. history.

#5 On January 21st, 1998 Israeli Prime Minister Benjamin Netanyahu arrived at the White House but received a very cold reception. In fact, President Clinton and Secretary of State Madeleine Albright actually refused to have lunch with him. That exact same day the Monica Lewinsky scandal broke, sending the Clinton presidency into a tailspin from which it would never recover.

#6 On September 28th, 1998 Secretary of State Madeleine Albright was working on finalizing a plan which would have had Israel give up approximately 13 percent of Judea and Samaria. On that precise day, Hurricane George slammed into the Gulf Coast with wind gusts of up to 175 miles an hour.

#7 On May 3rd, 1999 Palestinian leader Yasser Arafat was supposed to hold a press conference to declare his intention to create a Palestinian state with Jerusalem as the capital. On that precise day, the most powerful tornadoes ever recorded in the U.S. ripped through Oklahoma and Kansas. At one point one of the tornadoes actually had a recorded wind speed of 316 miles an hour.

#8 On April 30th, 2003, “the Road Map to Peace” that had been developed by the so-called “Quartet” was presented to Israeli Prime Minister Ariel Sharon by U.S. Ambassador Daniel Kurtzer. Over the next seven days, the U.S. was hit by a staggering 412 tornadoes. It was the largest tornado cluster ever recorded up to that time.

#9 In 2005, President George W. Bush (the son of George H. W. Bush) convinced Israel that it was necessary to remove all of the Jewish settlers out of Gaza and turn it over entirely to the Palestinians. According to the New York Times, the last settlers were evacuated on August 23, 2005. On that precise day, a storm that would be given the name “Katrina” started forming over the Bahamas. The city of New Orleans still has not fully recovered from the damage that storm caused, and it ranked as the costliest natural disaster in all of U.S. history up to that time.

#10 On May 19th, 2011 Barack Obama told Israel that there must be a return to the pre-1967 borders. Three days later on May 22nd a half-mile wide EF-5 multiple-vortex tornado ripped through Joplin, Missouri. According to Wikipedia, it was “the costliest single tornado in U.S. history.”

You would think that our leaders would have gotten the message by now.

But apparently they haven’t.

On Wednesday, September 21st Joe Biden delivered a major speech in front of the UN General Assembly in which he boldly called for the creation of a Palestinian state…

President Joe Biden told the United Nations on Wednesday the Palestinians are “entitled” to their own state, a day after the U.S. State Department announced $64 million in aid to the U.N. agency for so-called Palestinian refugees.

“We will continue to advocate for a lasting, negotiated peace between the Jewish and democratic state of Israel and the Palestinian people,” Biden said during his address at the U.N. General Assembly.

“The United States is committed to Israel’s security – full stop. And a negotiated two state solution remains our best way to ensure Israel’s security and prosperity for the future and give the Palestinians the state to which they are entitled,” he said.

In fact, as Hurricane Ian was tearing apart countless homes, the U.S. Ambassador to the United Nations once again reaffirmed our commitment to a Palestinian state…

US Ambassador to the UN Linda Thomas-Greenfield addressed the UN Security Council Briefing on the Situation in the Middle East Wednesday, during which she reiterated the Biden Administration’s support for the Two-State Solution.

“From day one, the Biden Administration has been unequivocal in our support for a two-state solution. That has not changed. As President Biden made clear to the UN General Assembly last week, “A negotiated two-state solution remains…the best way to ensure Israel’s security and prosperity for the future and give the Palestinians the state…to which they are entitled,” Ambassador Thomas-Greenfield said.

We can also see the same pattern with leaders of other nations.

A two-state solution – with Israelis and Palestinians living in peace, security, and dignity – is in everyone’s best interest. Canada is supportive of Prime Minister @YairLapid’s speech today, and we will continue to promote lasting peace and security in the region.

Just two days later, one of the most powerful storms to ever hit Canada made landfall…

Cleanup is underway in Atlantic Canada after Fiona made landfall early Saturday, Sept. 24, as one of the most intense weather systems to ever impact the country. Hundreds of thousands were left without power and scenes of incredible destruction emerged from Canada’s far eastern reaches.

This sort of thing just keeps happening over and over again, but our leaders simply refuse to see the pattern.

So they are going to continue to push for the land of Israel to be formally divided.

And as I have been warning for years, once that happens the consequences will literally be cataclysmic.

The message that we are supposed to understand is very clear.

Don’t touch the land of Israel.

Just don’t do it.

Unfortunately, our hard-hearted leaders are going to do it anyway, and the entire globe will pay a very great price for their foolishness.