The biometrics industry has never been known to miss an opportunity to make a profit. Especially when it comes at the expense of everyone’s privacy.

Since the outbreak of COVID-19, facial recognition companies have been hard at work creating a new sales pitch that will allow them to maximize their profits.

Across the globe, facial recognition companies are hard at work trying to convince politicians, law enforcement and the public that thermal imaging cameras will help stop the spread of COVID-19.

Forbes.com is all too eager to jump on the thermal imaging bandwagon, claiming that Athena Security’s facial recognition/thermal imaging software can scan 1000 people per hour.

“With Covid-19, you see the problem at airports today,” Athena Security CEO Lisa Falzone explains. “Passengers are waiting in lines to manually take their temperatures, which slows traffic down. With our technology, we can analyze 1000 people per hour.”

In fact, Athena Security has gone so far as to combine fever detection, facial recognition and gun detection into an all-in-one screening system.

“Our Fever Detection COVID19 Screening System is now a part of our platform along with our gun detection system which connects directly to your current security camera system to deliver fast, accurate threat detection – including guns, knives, and aggressive action. Our system can also alert you to falls, accidents, and unwelcome visitors.”

As Forbes.com points out, what makes Athena’s software so unique is their ability to send out real-time alerts to authorities.

“What’s different about Athena’s system, explains Falzone, is its ability to send out immediate alerts to the appropriate parties, who can then make an informed decision on how to act.”

The scariest thing about the proliferation of facial recognition/thermal imaging cameras is it gives law enforcement near god-like powers to identify and quarantine anyone they choose.

DroneUp suggests that law enforcement could use thermal imaging drones as an excuse to monitor people for COVID-19.

“Assurance is key in uncertain times. That is why DroneUp is functioning in conjunction with FAA regulatory precautions as we collaborate with state and local officials to ensure safety for all. We strongly encourage our fellow drone operators to also become keenly aware of the protocol and regulations as the pandemic evolves.”

That same scenario is being played out across the country, with more than 1,500 police departments using drones to monitor the public. In Michigan, the Hillsdale Sheriff’s Office recently purchased a DJI Matrice 210 drone equipped with thermal imaging.

“The Owensboro Police Department recently created a 10-member Unmanned Aerial Vehicle Team who were trained and certified to fly the department’s $2,300 drone inside city limits.”

“The objective is to create a robust network of drone responders and geographic information systems experts capable of rendering direct assistance and location intelligence during complex emergencies, rapidly expanding incidents, and major disasters. Increased communication and cooperation are essential to the successful deployment of drones and other unmanned systems in support of public safety operations,” said Travis Calendine, chairperson of the Public Safety Unmanned Response Team North Texas.

“The CVPD can proactively cover about 17 of the 52 square miles of our city with drones launched from two sites. Our goal this year is to add launch sites to provide 100% aerial support coverage during daylight hours 7 days a week by the end of the year,” Vern Sallee, patrol operations captain said.

The worldwide fear of the cornavirus is so widespread that MIT, Harvard and The Mayo Clinic have designed a new COVID-19 warning app called “Private Kit.” 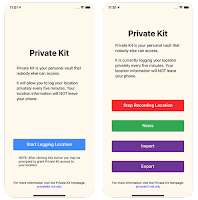 As Fast Company explains, Private Kit will allegedly alert a user when someone infected with the COVID-19 is close.  Maybe they could use this app to alert them when a “Walking Dead” zombie is close by?

“Researchers just released an app in beta that alerts people when they come into contact with someone who’s been diagnosed with COVID-19, potentially reducing the virus’s spread if the app is downloaded by a large chunk of the population.”

Of course there is a catch to using Private Kit: users will lose their privacy.

“After you download the app and consent to sharing your location (which is necessary in order for the app to work), the app starts tracking you. Should you cross paths with someone who’s been diagnosed with the coronavirus who also has the app, you’ll receive a notification telling you when and for how long.”

“Potential beneficiaries of free verification’s range from universities who need to verify people taking exams to marketplaces that have volunteers who help people in need and to registries that could tackle fake accounts and set up reliable databases about people in quarantine. But also, digital health care service providers, organizations fighting fake news and beyond.”

If corporations, politicians and law enforcement can convince an apathetic public that facial recognition, thermal imaging and gun detection cameras can keep us safe, then our privacy will vanish before COVID-19 runs its course.