by Ruby Henley
For the record, I have been criticized for mentioning the fact that the Las Vegas massacre could be a false flag.  I have never been one of those false flag truthers, but I do understand the meaning of a false flag.  I do understand that they do exist, and the United States government is on the record as being accused of using them in the past.  I, also, want to distinguish between a false flag and a “hoax.”  There is a distinct difference here, and the loss of life is the main distinction.
First of all, I do believe that people did die and were injured in the Las Vegas massacre.  Make no mistake about it, these victims will suffer mentally…even if they heal physically…for the rest of their lives.  Post- traumatic stress disorder (PTSD) is a deeply disturbing and life altering effect, which results in the human psyche suffering a traumatic event it simply cannot fully process.  The event damages the mind to the point, it continues to play back the emotional trauma experienced at the time of the event, over and over in a continuous fashion.  It cripples the victim to the point of no return.

I would like to establish by the book just what the definition of this disorder is. This comes from the www.mayoclinic.org/diseases-conditions/post-traumatic-stress-disorder/symptoms-causes/syc-20355967 QUOTE
Posttraumatic stress disorder (PTSD) has been described as “the complex somatic, cognitive, affective, and behavioral effects of psychological trauma” [1]. PTSD is characterized by intrusive thoughts, nightmares and flashbacks of past traumatic events, avoidance of reminders of trauma, hypervigilance, and sleep disturbance, all of which lead to considerable social, occupational, and interpersonal dysfunction.
The diagnosis of PTSD can be challenging because of the heterogeneity of the presentation and resistance on the part of the patient to discuss past trauma. Another complicating factor is that traumatic events are associated with a range of other psychopathology including depression and other anxiety disorders. Patients exposed to multiple traumatic events may be mistakenly diagnosed with PTSD rather than another primary disorder.END OF QUOTE
So as you can see, the victims of the Las Vegas will suffer long after they heal physically heal.

Let’s talk about exactly what a false flag actually is, and I will give an example.
en.wikipedia.org/wiki/False_flag QUOTE
The contemporary term false flag describes covert operations that are designed to deceive in such a way that activities appear as though they are being carried out by individual entities, groups, or nations other than those who actually planned and executed them.
Lance deHaven-Smith states that “The term “false flag” originally referred to pirate ships that flew flags of the home countries of the ships they were approaching to attack and board. The pirates used the false flag as a disguise to prevent their victims from fleeing or preparing for battle. The term today extends beyond naval encounters to include countries that organize attacks on themselves and make the attacks appear to be by enemy nations or terrorists, thus giving the nation that was supposedly attacked a pretext for domestic repression and foreign military aggression.”[1]
Operations carried out during peace-time by civilian organizations, as well as covert government agencies, can (by extension) also be called false flag operations if they seek to hide the real organization behind an operation.[citation needed]
This is an example of a false flag that will open your eyes if you did not believe they are an actual reality.
Operation Northwoods memorandum (13 March 1962)[15]
The proposed, but never executed, 1962 Operation Northwoods plot by the U.S. Department of Defense for a war with Cuba involved scenarios such as fabricating the hijacking or shooting down of passenger and military planes, sinking a U.S. ship in the vicinity of Cuba, burning crops, sinking a boat filled with Cuban refugees, attacks by alleged Cuban infiltrators inside the United States, and harassment of U.S. aircraft and shipping and the destruction of aerial drones by aircraft disguised as Cuban MiGs.[16] These actions would be blamed on Cuba, and would be a pretext for an invasion of Cuba and the overthrow of Fidel Castro’s communist government. It was authored by the Joint Chiefs of Staff, but then rejected by President John F. Kennedy. The surprise discovery of the documents relating to Operation Northwoods was a result of the comprehensive search for records related to the assassination of President John F. Kennedy by the Assassination Records Review Board in the mid-1990s.[17] Information about Operation Northwoods was later publicized by James Bamford.[18] 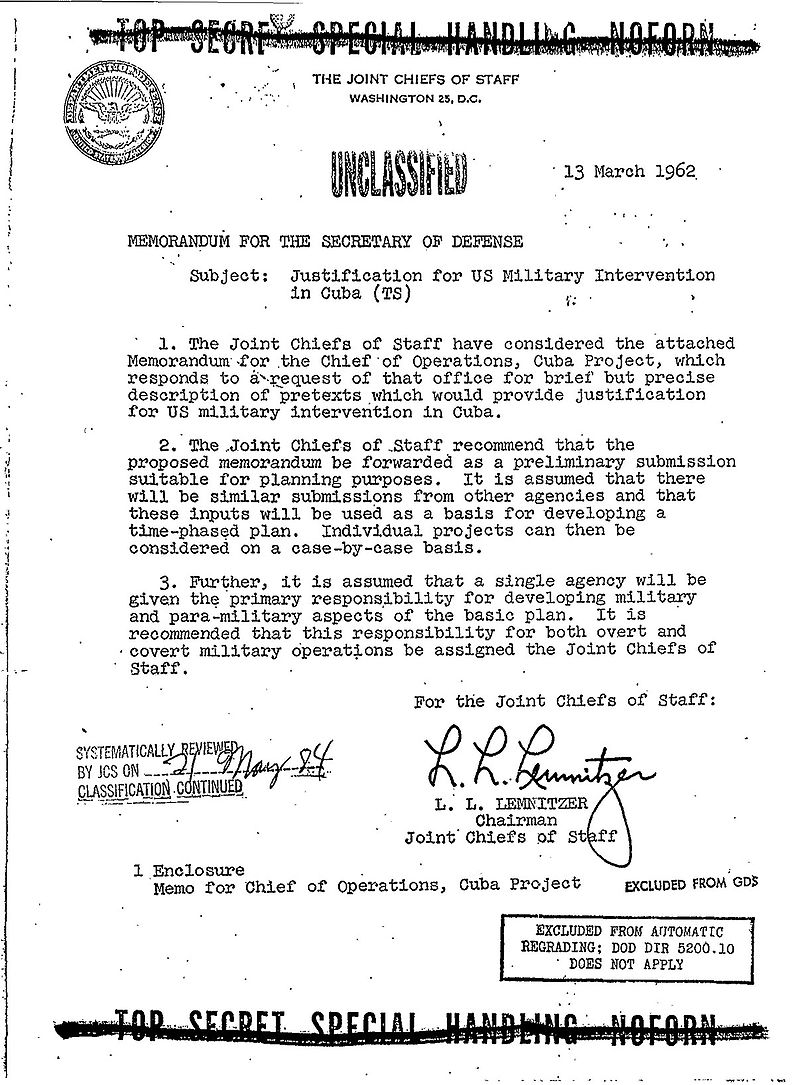 answers.yahoo.com/question/index;_ylt=A0LEV1Xiy_FZN0wAMCNXNyoA;_ylu=X3oDMTEzOTlxdXY3BGNvbG8DYmYxBHBvcwMxBHZ0aWQDVUkwMkM1XzEEc2VjA3Nj?qid=20110514140256AAUerks
The Vietnam war was promoted by the false flag operation known as The Gulf of Tonkin incident.
A story began that Vietnamese gun boats attacked US ships provoking an act of war. This was was instantly repeated and bombarded into the American public by the mass media in order to formulate public opinion and support for War.

The American commitment to the war against Vietnam, which killed over 50,000 U.S. military personnel, and probably over 2 million Vietnamese civilians, was cemented by an incident that appears to involve more fiction than fact.
In the Gulf of Tonkin incident, North Vietnamese torpedo boats supposedly attacked the USS Maddox in the Gulf of Tonkin, off Vietnam, in a pair of assaults on August 2 and 4 of 1964. It was the basis for the Tonkin Gulf Resolution, which committed major American forces to the war in Vietnam. The resolution passed the House of Representatives unanimously, and passed in the Senate with only two dissenting votes.
In retrospect it is clear that the alleged attack was little more than a transparent pretext for war, delivered in a one-two punch. First, media descriptions of the August 2nd attack as an “unprovoked attack” against a U.S. destroyer on “routine patrol” hid the fact that the Maddox was providing support for South Vietnamese military operations against the North. Second, the alleged August 4th attack appears to be a fabrication, official accounts attributing the “error” to confusion.

It is difficult for the God-fearing human to understand the Global Elite and their quest for power.  I still have problems in understanding evil.  However, with each passing day, I do comprehend more and more concerning the Global Elite and their quest for power.  Any entity, who chooses to control another in order to further their hunger for power is evil.  Evil is the lust for control over another being in order to satisfy that lust.
Where does that lust of power originate?  Certainly not from God, as God gives all his children sovereignty over their own existence at birth.  Free will is that sovereignty, and God does not seek to take that free will from his children.  Jesus Christ fulfilled his mission on earth to deliver us from the evil entrapment by Lucifer, God’s fallen angel.  Lucifer is said to be the most beautiful of angels, and he in his own self-aggrandizement sought to conquer God as ruler of creation.
We have two opposing paths of distinction, which are chosen and followed by humans here on earth.  I see those two opposing paths as Satanism and Christianity.  You either accept and follow Jesus Christ/God or Lucifer/Satan.  I believe at this time, we are seeing Lucifer seeking to control all the souls he can, as Jesus Christ will soon return to earth to deal with him and all his followers.
Since the Global Elite seek to control the masses, we have to assume they are evil and follow Satan.  A least this is my reasoning.  Just what is the definition of the Global Elite?
The Global Elite consists of those with tremendous amounts of both wealth and power in our world. Like any group, the Gobal Elite has both individuals and factions which are inclined to promote their own self-serving interests.
Many scholars who have spent considerable time studying this group have found that there are factions within this elite group which at times fight against each other, while at other times they work together for common goals. Many (but certainly not all) of these elite believe that because of their intelligence and wealth, they deserve to have inordinate amounts of power and influence on global politics.
Members of the Global Elite do all they can to keep their existence and their activities secret, knowing that if people find out about them and their immense power, they will demand change.
They have established their secret societies, and they meet in private settings concocting more methods to control the people of the world.
Make no mistake about it, they will use false flags to get their own agenda completed.  Again it is difficult to believe for the average God-fearing human, and by “God-fearing” I mean believing in the reality that God/Jesus Christ is the ultimate Creator.  Being the Creator or Source for all original creation will never compare or equal the creative power of man, although the Global Elite seek to obtain the God-particle.  They can seek all they want, but they will never find and obtain for their own.  They will self-destruct first.
www.dailymail.co.uk/news/article-2746727/Maybe-shouldn-t-looking-quite-hard-God-particle-destroy-universe-warns-Stephen-Hawking.html#i-31b36ef647dc81ec
Stephen Hawking tells us this:  QUOTE
The theoretical physicist wrote his thoughts on the Higgs boson in the preface to a new book, Starmus, a collection of lectures by scientists and astronomers including Neil Armstrong, Buzz Aldrin, Queen guitarist Brian May.
Prof Hawking wrote: ‘The Higgs potential has the worrisome feature that it might become megastable at energies above 100bn giga-electron-volts (GeV).
‘This could mean that the universe could undergo catastrophic vacuum decay, with a bubble of the true vacuum expanding at the speed of light.
‘This could happen at any time and we wouldn’t see it coming.’ END OF QUOTE

5 thoughts on “False Flag – Difference Between A False Flag And A Hoax – For The Record.”