Fed Tightening Cycles Coincide With Or Lead To Bursting Of Global Asset Bubbles. Is President Trump The Next Hoover? pic.twitter.com/7PyInwq6xY

maybe you shouldn't look at this chart pic.twitter.com/9SLEDPBrnO

The middle class buy liabilities they falsely believe are assets

An asset puts money in your pocket

Wall Street, Fed, Trump Admin, Global Central Banks, & government propaganda tell you, the everyday American that all is fine do not worry — global synchronized growth narrative to infinity – YAY!, however, that narrative could be cracking (look below)… pic.twitter.com/hndFMwMkoa

Would it really have been so awful to let Deutsche go under back in 2008? $DB pic.twitter.com/JpFiYV6XtB

Back to Reality: 2017’s All-Time Low Volatility Is Long Gone

One of the tells of a market unglued from reality is its relentless price movement in either direction regardless of should-be impactful news.

2017 saw a stock market that was going to go up, relentlessly, no matter what happened. In what was likely the shining moment of the Fed-engineered non-recovery recovery, no amount of political or economic turmoil could derail the perpetual bids.

While the market is still ignoring the vast majority of serious issues signaling all manner of valuation and fundamentals warnings, volatility has returned. Things are getting back to normal. They always do. And as the process continues, it’s going to be mighty ugly for risk asset bulls.

Too many investors possess a hook-up mentality with stocks. Holding periods are at historic lows. According to the New York Stock Exchange’s extensive database, the average holding period for stocks in 1960 was 8 years, 4 months.

As of December 2016, it was 8.3 months. Last year’s unprecedented stock market performance for the S&P 500 was the worst event for investor psyche. I’ll explain.

No doubt, it was a magical year. The market closed higher every month (first time in history). The Sharpe Ratio, or returns on the S&P relative to the risk-free (Treasury Bills) and volatility was 3.7. Since volatility was non-existent last year, risk-adjusted returns for the market were among the best I ever lived through; at least the highest in over 50 years. 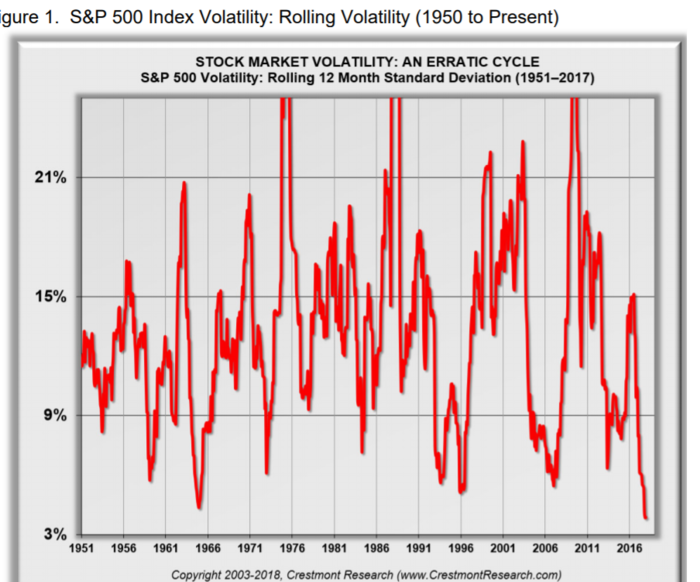 Think of it like dating the most popular girl (or guy), in high school. In the beginning, you wonder how the heck it happened. Such luck! Eventually, you believe you’re entitled to dating prom kings and queens in perpetuity. The problem is ego. You convince yourself the perfect prom date is the norm and begin to compare every date after to “the one.” What a great way to set yourself up for failure, missed opportunities and myopia that slaughters portfolio returns (and possibly, relationships!)

In 2017, equity investors witnessed a storybook investment scenario. This year so far? Reality bites. It’s not that your adviser doesn’t know what he or she is doing; it’s not the market doing anything out of the ordinary, either. The nature of the market is volatility, jagged edges and fractals. The sojourn, the Sunday drive in perfect weather with the top down on a newly-paved road in 2017, was an outlier.

The environment you’re investing through today is the norm; therefore, the problem must be the driver, the investor who doesn’t realize the road conditions are back to resembling 5pm rush-hour in a downpour.