When will precious metals markets finally make their move?

It’s a question that has frustrated many investors in 2021. Gold and silver prices have remained stubbornly rangebound for the past several months.

There is no way to know exactly when this consolidation period will end. Long-term investors would be wise to hold their core positions regardless of market conditions (and grow them when feasible).

However, there are signs both technical and fundamental that point to a major directional move coming in the relatively near future.

One of them flashed on Wednesday following the Federal Reserve’s latest policy announcement. As expected, officials said they plan to begin withdrawing some of their “emergency” stimulus in the face of surging inflation pressures in the economy. They will still be stimulating already overheated markets, just at a more “tapered” pace.

Price levels have risen so rapidly in recent months that Fed Chief Jerome Powell had to essentially walk back his oft-repeated “transitory” assurances by redefining the meaning of the term. 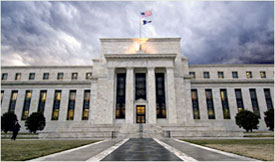 The Federal Reserve continues to wreck
the value of our currency.

“I don’t think we are behind the curve,” he insisted. “It will be premature to raise rates today.”

Powell is taking an astounding position for a central banker – namely, that he is unwilling at this time to pursue price stability as required by the Fed’s own dual mandate.

Instead, he projects (hopes) that inflation rates will move down on their own by the second or third quarter of 2022.

Never before has a Federal Reserve chairman so openly flouted the responsibility to fight inflation. Powell no longer even denies that inflation has gotten out of hand. He just refuses to do anything meaningful about it!

And next year, new excuses may emerge. The Fed may even start verbalizing what it sees as the benefits of high inflation in another deflection of responsibility for its unwillingness to stop creating inflation.

Investors should take note of this insanity and act accordingly. Given that interest rates will remain artificially suppressed well below the inflation rate, dangerous economic and market distortions will continue to build.

It is dangerous to buy risk assets such as stocks at artificially inflated valuations. It is especially dangerous to own false safe havens such as bonds when their yields are so low that they are virtually guaranteed to deliver negative real returns.

“Don’t fight the Fed” may be a mantra with common sense appeal. But a wise investor doesn’t look only at those asset classes the Fed is trying to stimulate directly.

A wise investor also anticipates unannounced, unintended, potentially unpleasant consequences of Fed stimulus that can devastate the portfolios of the unprepared.

The last thing central bankers and their beneficiaries on Wall Street want to see is a massive flight from financial assets into gold and silver. But market history shows that Fed-fueled asset booms always lead to busts – whether in nominal or real terms or both. 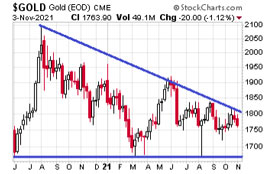 The gold chart shows prices forming a massive descending triangle pattern over the past year and a half, with major support at $1,675/oz and resistance coming in around $1,800 level.

The market will ultimately break either above or below the consolidation pattern.

See also  DiMartino Booth: It would be very premature to declare victory on inflation

Since it formed from an all-time high in August 2020, the triangle carries more bullish implications than one that might appear within the context of a larger downtrend.

But anything is possible in these markets, including false breakouts and false breakdowns that whipsaw short-term momentum traders.

Despite lackluster price action, bullion investors have been buying heavily this year. So much so that coin premiums remain elevated, and many of Money Metals’ weaker competitors are struggling to keep up with demand.

As with other areas of the economy where shortages are helping to drive massive price hikes, the same phenomenon could soon be seen in precious metals markets.

A whole new wave of headline-following, momentum-chasing buyers would likely be drawn in by breakout moves in gold and silver, whenever they occur, further feeding into their bullish supply and demand fundamentals.