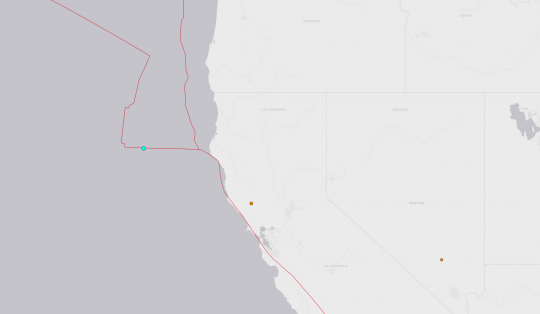 An unusually large earthquake just hit the west coast.  According to the USGS, a magnitude 4.6 earthquake that was centered directly on a fault line happened approximately 221 kilometers west of Ferndale, California on Friday.  Fortunately it was far enough away from shore that no major damage was caused.  But if this was just a foreshock for a larger event that is still to come, then there is definitely reason to be concerned.  Scientists tell us that California is way overdue for the “Big One”, and as you will see below, when it finally arrives it could potentially be the worst cataclysm in American history up to this point.

And of course this magnitude 4.6 earthquake on Friday follows several other significant west coast earthquakes that happened earlier in the week.

The quake was centered 2 miles southwest of the city of San Bernardino, at a depth of 10 miles, the U.S. Geological Survey said.

And on Wednesday a very alarming magnitude 4.7 earthquake rattled the Oregon coast…

A moderate-sized, 4.7 magnitude earthquake struck off the coast of Oregon, according to the U.S. Geological Survey (USGS).

It is not unusual for the west coast to experience earthquakes.  They happen all the time and they are usually very small.

But for so many quakes of this size to happen so close together is definitely noteworthy.  This is especially true considering all of the other shaking that we have seen along the Ring of Fire lately.

In fact, a magnitude 6.8 earthquake that struck Indonesia on Friday created quite a bit of panic…

READ  Don’t Get Excited About Gold’s Mini-Rally: A Bigger Move Lower Is Likely Around The Corner

Panic broke out as buildings swayed and electricity was cut off when the quake struck at a relatively shallow depth of 10 miles off the east coast of Sulawesi island.

Indonesia’s geophysics agency issued a tsunami warning for coastal communities in Morowali district, where residents were advised to move away from the coast.

Many Californians tend to mock the idea that they could potentially be in danger, because the truth is that a highly destructive quake has not hit the west coast in more than 20 years.

But scientists promise that it is just a matter of time before the “Big One” arrives, and when it does it could be far worse than most people would dare to imagine.

I have shared the following information previously, but I feel led to share it again.  Scientists that have studied the geography of California very carefully have come to the conclusion that an extremely large earthquake could potentially “plunge large parts of California into the sea almost instantly”…

This is not the plot to a new science fiction movie, and it is not some crazy rumor that people are spreading around the Internet.

We are talking about nationally-respected scientists that have spent their entire careers studying these things.  According to Cal State Fullerton professor Matt Kirby, this wouldn’t be a slow process either.  In fact, he insists it is something “that would happen relatively instantaneously”…

For those that are living directly along the coastline, there will be no escape.

READ  Don’t Get Excited About Gold’s Mini-Rally: A Bigger Move Lower Is Likely Around The Corner

Let us hope that nothing like this happens for many years to come.  But we live at a time when our planet is becoming increasingly unstable, and there is no doubt that the “Big One” is coming to Calif0rnia at some point.

Speaking of instability, the middle of the country was just hit by a second “bomb cyclone” in less than a month, and it is being reported that wind speeds were above 100 miles per hour in some locations…

A ‘bomb cyclone’ is continuing to move over the Plains and Upper Midwest after dropping as much as two feet of snow in places.

The system is forecast to weaken on Friday as it moves north into Canada, however gusty winds remain a concern with blizzard warnings remaining in effect for some 4.5 million residents in parts of the Dakotas and Minnesota.

As of late Thursday, the storm had dropped up to 25 inches in Norbeck, South Dakota, while the highest wind speed was recorded in Pueblo West, Colorado, where a ‘gustnado’ briefly reached 107mph.

I can’t remember another time when the Midwest was slammed by such a massive blizzard in April.  If you can find another example where snowfall totals of two feet of snow were accompanied by winds of 100 miles per hour during this month please let me know.

As I noted yesterday, we are seeing things happen that we have never seen before.

And if you think what we have witnessed so far is strange, just wait, because things are going to get a lot stranger…