WASHINGTON, D.C. — Americans’ concern with immigration continues to be heightened, as 23% name it the most important problem facing the country. This is by one percentage point the highest Gallup has ever measured for the issue since it first began recording mentions of immigration in 1993. 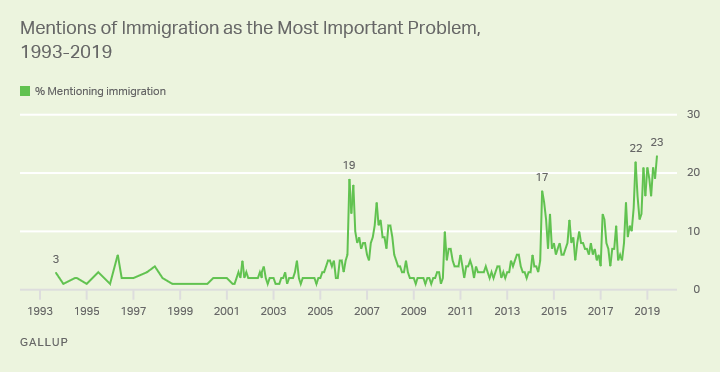 The June 3-16 poll was conducted as the U.S. continues to grapple with how to handle a surge of Central American immigrants at the U.S.-Mexican border. Gallup has previously found spikes in mentions of immigration as the most important U.S. problem at other times when the immigration debate intensified, including:

Trump blinks on immigration, failing his supporters one more time

Never underestimate the ability of some of President Trump’s most devoted supporters to delude themselves into thinking each one of his losses on immigration is actually a win. Case in point, the right-leaning Washington Times reported in earnest that House Democrats “blinked” by agreeing to “grant at least part of President Trump’s emergency border funding” request.

Which “part” did Democrats agree to fund? No, not the part that involves building the long-promised “wall.” It’s the part where illegal immigrants flooding in to the country get more free stuff.